Thomas Ritchie (born about 1928 – ????) [1] was a psychiatric survivor who founded the Scottish Union of Mental Patients whilst a state patient incarcerated in Hartwood Hospital in 1971. [2] : 38 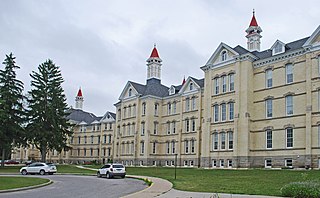 MindFreedom International is an international coalition of over one hundred grassroots groups and thousands of individual members from fourteen nations. Based in the United States, it was founded in 1990 to advocate against forced medication, medical restraints, and involuntary electroconvulsive therapy. Its stated mission is to protect the rights of people who have been labeled with psychiatric disorders. Membership is open to anyone who supports human rights, including mental health professionals, advocates, activists, and family members. MindFreedom has been recognized by the United Nations Economic and Social Council as a human rights NGO with Consultative Roster Status. 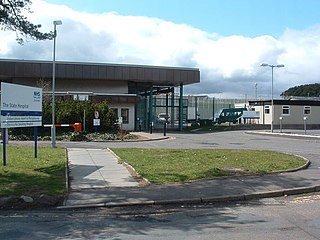 The State Hospital is a psychiatric hospital near the village of Carstairs Junction, in South Lanarkshire, Scotland. It provides care and treatment in conditions of high security for around 140 patients from Scotland and Northern Ireland. The hospital is managed by the State Hospitals Board for Scotland which is a public body accountable to the First Minister of Scotland through the Scottish Government Health and Social Care Directorates. It is a Special Health Board, part of the NHS Scotland and the only hospital of its kind within Scotland. 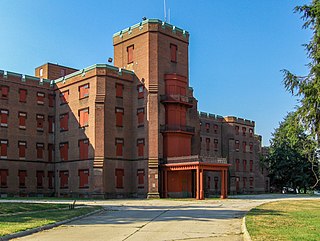 Deinstitutionalisation is the process of replacing long-stay psychiatric hospitals with less isolated community mental health services for those diagnosed with a mental disorder or developmental disability. In the late 20th century, it led to the closure of many psychiatric hospitals, as patients were increasingly cared for at home, in halfway houses and clinics, in regular hospitals, or not at all.

The psychiatric survivors movement is a diverse association of individuals who either currently access mental health services, or who are survivors of interventions by psychiatry.

The recovery model, recovery approach or psychological recovery is an approach to mental disorder or substance dependence that emphasizes and supports a person's potential for recovery. Recovery is generally seen in this model as a personal journey rather than a set outcome, and one that may involve developing hope, a secure base and sense of self, supportive relationships, empowerment, social inclusion, coping skills, and meaning. Recovery sees symptoms as a continuum of the norm rather than an aberration and rejects sane-insane dichotomy.

Mad Pride is a mass movement of the users of mental health services, former users, and the aligned, which advocates that individuals with mental illness should be proud of their 'mad' identity. It was formed in 1993 in response to local community prejudices towards people with a psychiatric history living in boarding homes in the Parkdale area of Toronto, Ontario, Canada, and an event has been held every year since then in the city except for 1996. A similar movement began around the same time in the United Kingdom. By the late 1990s similar events were being organized under the Mad Pride name around the globe, including Australia, Ireland, Portugal, Brazil, Madagascar, South Africa, France, South Korea and the United States. Events draw thousands of participants, according to MindFreedom International, a United States mental health advocacy organization that promotes and tracks events spawned by the movement. 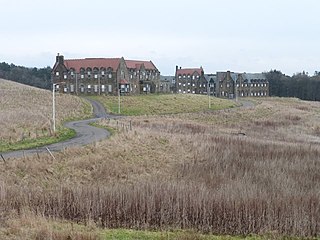 Bangour Village Hospital was a psychiatric hospital located west of Dechmont in West Lothian, Scotland. During the First World War it formed part of the much larger Edinburgh War Hospital. 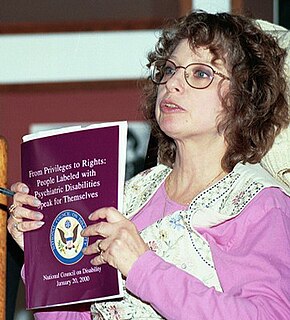 Judi Chamberlin was an American activist, leader, organizer, public speaker and educator in the psychiatric survivors movement. Her political activism followed her involuntary confinement in a psychiatric facility in the 1960s. She was the author of On Our Own: Patient-Controlled Alternatives to the Mental Health System, which is a foundational text in the Mad Pride movement.

The Mental Health (Scotland) Act 2003, which came into effect on 5 October 2005, is an Act of the Scottish Parliament that enables medical professionals to legally detain and treat people on the grounds of mental disorders, with the Mental Health Tribunal for Scotland and the Mental Welfare Commission for Scotland providing safeguards against mistreatment.

The following outline is provided as an overview of and topical guide to the psychiatric survivors movement:

Hartwood Hospital was a psychiatric hospital located in the village of Hartwood near the town of Shotts in Scotland.

Mental health in the United Kingdom involves state, private and community sector intervention in mental health issues. One of the first countries to build asylums, the United Kingdom was also one of the first countries to turn away from them as the primary mode of treatment for the mentally ill. The 1960s onwards saw a shift towards Care in the Community, which is a form of deinstitutionalisation. The majority of mental health care is now provided by the National Health Service (NHS), assisted by the private and the voluntary sectors.

The Scottish Union of Mental Patients was an organisation first established by mental patients at Hartwood Hospital in July 1971. 27 patients signed a petition to "redress of grievances and better conditions" at the hospital. This was the first Mental Patients Union to be formed in the UK and predated the Mental Patients' Union founded in London in 1973. It was founded by ,Thomas Ritchie, and Robin Farquharson was also a participant. Unlike many other examples of anti-psychiatry SUMP was based on a sense of solidarity amongst a small group of patients detained in locked wards.

A "State patient" or "Secretary of state patient" is a Scottish term referring to someone detained under a restriction order having been deemed by a High Court as suffering from a mental disorder and where a psychiatric hospital is specified as the place of detention. It is a form of involuntary commitment. Such a patient cannot be discharged by the primary psychiatrist responsible for their care – referred to as their Responsible Medical Officer, but rather by the Scottish Executive. There is provision for taking an appeal to the Sheriff in the Sheriffdom where the custodial hospital is located.

Independent mental health advocacy, IMHA, is advocacy for someone being treated, possibly involuntarily, for a mental disorder provided by someone not involved in the treatment. IMHA can help a service user understand and exercise their rights and ensure their views and preferences are expressed. Advocacy seeks to address unequal power relations between mental health professionals and those using their services. Those who provide such advocacy are called Independent mental health advocates, IMHA.