Rev. Thomas Robbins, D.D. (August 11, 1777 – September 13, 1856) was a Congregational minister, a bibliophile, and an antiquarian. [1] He became the first librarian of the Connecticut Historical Society. [2] 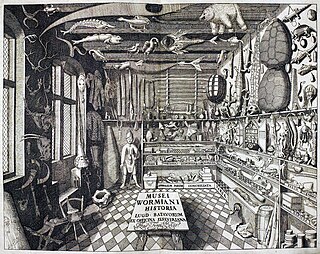 Robbins was born in Norfolk, Connecticut, the ninth child of the Rev. Ammi Ruhamah Robbins, and Elizabeth (Le Baron) Robbins. Ammi was the first minister of Norfolk. [3] He had 12 siblings. [4]

Robbins entered Yale University at the age of 15. In January 1796, he began a diary which he kept up through 1854. While in college, Robbins also began collecting books, a passion that would eventually define his life.

He graduated from Yale in 1796, though he spent his senior year at Williams College, where his father was a trustee, and is listed as a 1796 alumnus of Williams as well. [5] 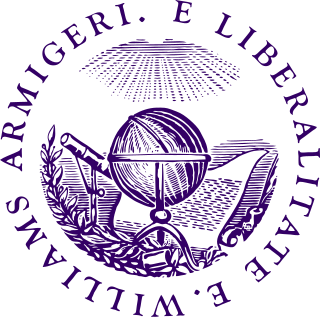 Williams College is a private liberal arts college in Williamstown, Massachusetts. It was established in 1793 with funds from the estate of Ephraim Williams, a colonist from the Province of Massachusetts Bay who was killed in the French and Indian War in 1755.

For the first six years after graduating from university, Robbins taught, preached, and studied theology. In 1798, he was licensed to preach by the Litchfield North Association. From 1799 to 1802, he was in charge of the Danbury, Connecticut's academy. 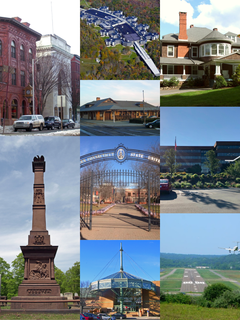 In 1803, the Connecticut Missionary Society, the evangelistic arm of the Connecticut General Association of Congregational ministers, sent him to a new settlement on the Western Reserve, Ohio where he spent three years organizing churches before returning to New England in poor health. From 1808-1827, he preached in East Windsor, Connecticut. His brother, Rev. Francis L. Robbins, was the pastor in the next town of Enfield, Connecticut. [6] From there he went to preach in Stratford, Connecticut. [7] Robbins succeeded his uncle, Rev. Lemuel Le Baron, as Congregational minister in Mattapoisett, Massachusetts, preaching his first sermon there September 25, 1831. [8] 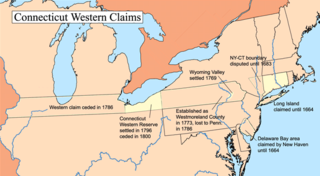 The Connecticut Western Reserve was a portion of land claimed by the Colony of Connecticut and later by the state of Connecticut in what is now mostly the northeastern region of Ohio. The Reserve had been granted to the Colony under the terms of its charter by King Charles II. 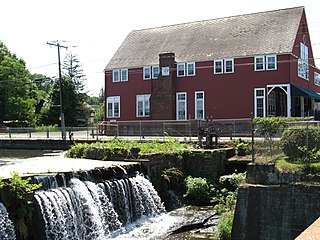 East Windsor is a town in Hartford County, Connecticut, United States. The population was 11,162 at the 2010 census. The town has five villages: Broad Brook, Melrose, Scantic, Warehouse Point and Windsorville.

In 1837, Robbins was appointed to the Massachusetts State Board of Education. The following year, he received the Doctor of Divinity degree from Harvard Divinity School. Robbins was a Trustee of Williams College from 1842-1853. [9] He was also elected to the Connecticut Academy of Arts and Sciences, and the National Institution of Science of Washington. [10]

He was elected a member of the American Antiquarian Society in 1815. [11]

"He commenced his collection while in college, by preserving his textbooks, and in 1809 made a formal beginning of a permanent library, by making a catalogue of his entire stock, consisting of one hundred and thirty volumes, with a determination that he would add at least one hundred volumes a year as long as he should live." (from Robbins' obituary, written by Henry Barnard.)

Robbins' became a librarian at the end of his career. The seeds were sown in 1822 when Robbins publicly suggested the creation of a historical society in Connecticut. After its establishment in 1825 in Hartford, Connecticut, he became its first corresponding secretary.

In 1844, educator Henry Barnard offered Robbins the position of librarian at the Connecticut Historical Society, the society elders being as interested in Robbins' book collection as they were in Robbins' services. [1] By the time Robbins left for Hartford, he had over 4,000 volumes, [13] mostly on subjects of history and theology. A notable part of the collection was the 385 volume Journal des sçavans , the earliest published scholarly periodical. [1] The collection also included 596 coins, such as a Roman denarius. [13]

Never having married, he revised his Last Will several times in an effort to assure his library was sustained after his death. On May 27, 1846, he bequeath his library to the historical society in exchange for an annual salary of $600. [1]

Robbins died at the age of 79 in Colebrook, Connecticut at the home of his niece. In addition to the extensive book collection, Robbins bequeath $3,000 to the society to care for the books, and to enlarge the collection. [9] Each book contains a bookplate and all the bookplates include a record of the price paid for the book. The society also has Robbins' original bookshelves. [1]

His portrait, painted by Reuben Moulthrop in 1801, is located in Hartford at the Connecticut Historical Society's museum. [14]

Reverend Leonard Bacon was an American Congregational preacher and writer. He held the pulpit of the First Church New Haven and was later professor of church history and polity at Yale College. 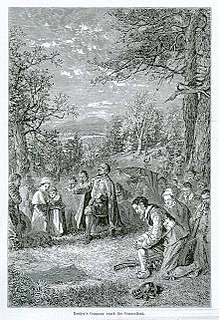 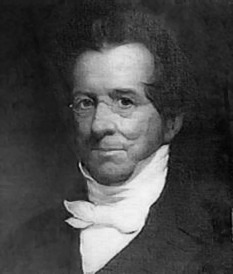 The Reverend Thomas Hopkins Gallaudet, LL.D.,(December 10, 1787 – September 10, 1851) was an American educator. Along with Laurent Clerc and Mason Cogswell, he co-founded the first institution for the education of the deaf in North America, and he became its first principal. When opened on April 15, 1817, it was called the "Connecticut Asylum for the Education and Instruction of Deaf and Dumb Persons," but it is now known as the American School for the Deaf.

Jedidiah Morse was a notable geographer whose textbooks became a staple for students in the United States. He was the father of the telegraphy pioneer and painter Samuel Morse, and his textbooks earned him the sobriquet of "father of American geography." 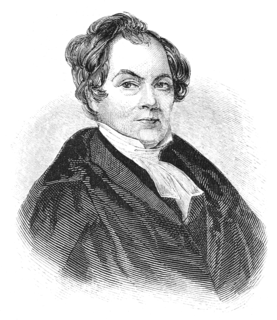 William Buell Sprague was an American Congregational and Presbyterian clergyman and compiler of Annals of the American Pulpit, a comprehensive biographical dictionary of the leading American Protestant Christian ministers who died before 1850.

Leonard Woolsey Bacon was an American clergyman, born in New Haven, Connecticut. He was a social commentator and a prolific author on religious, social, and historical matters. In social, political, and religious issues of his times, he often broke with the traditions of his countrymen, sometimes causing "great sensation."

Rev. Dr. Ashley Day Leavitt (1877–1959) was a Yale-educated Congregational minister who led the State Street Church in Portland, Maine, and later the Harvard Congregational Church in Brookline, Massachusetts. Leavitt was a frequent public speaker during the early twentieth century, and was awarded an honorary degree from Bowdoin College for his pastorship of several congregations during wartime.

Benjamin Trumbull was an early American historian and preacher.

George Blagden Bacon was a United States clergyman and author of texts on religious issues. Bacon was a congregational pastor in Orange, New Jersey. The ministry ran in the Bacons' blood: George B. Bacon was the son of Leonard Bacon and the brother of Leonard Woolsey Bacon, both Congregationalist pastors; two other brothers were also preachers, Thomas Rutherford Bacon of New Haven, and Edward Woolsey Bacon of New London, Connecticut.

Edward Woolsey Bacon was an American Congregational clergyman, as well as a sailor and a soldier. 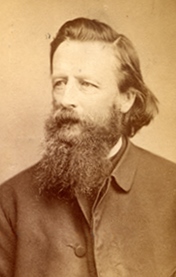 Thomas Kinnicut Beecher was a Congregationalist preacher and the principal of several schools. As a Congregational minister, his father took the family from Beecher's birthplace of Litchfield, Connecticut, to Boston, Massachusetts, and Cincinnati, Ohio, by 1832. 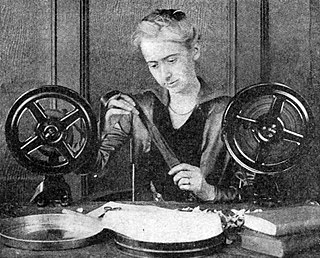 Reuben Moulthrop (1763-1814) was an early American artist based in East Haven, Connecticut. During his lifetime Moulthrop was famous for the wax figures that he arranged in tableaux, but he is known to posterity through his portraits, which are in many important collections, including those of the American Folk Art Museum, the Detroit Institute of Art, the Metropolitan Museum of Art, and the New York Historical Society.

Joseph McKean was the second holder of the Boylston Professorship of Rhetoric and Oratory at Harvard University. He was also the seventh librarian of the Massachusetts Historical Society, occupying that position from October 1809, to April, 1812. It was during this time that he created the first catalog of the Boston Athenæum.

Horace Hooker was an American Congregationalist minister and author.

Albert Carlos Bates was an American librarian, bibliographer, genealogist, book collector, and historian. He was born in East Granby, Connecticut. He served as librarian of the Connecticut Historical Society from 1893 to 1940. He was a member of the Acorn Club. He was awarded an honorary Master of Arts by Trinity College in 1920.

Nathaniel Bartlett, pastor of the Congregational Church of Redding, Connecticut during the period 1753-1810, was one of the numerous Colonial American clergymen who played an active role during the American Revolution. He was among many such American patriots living in British Colonial America on the eve of the Revolutionary War, who found themselves in circumstances which compelled them to make a personal contribution to the unfolding drama of one of history's most momentous events.