Last updated March 07, 2019
For other people with the same name, see Thomas Robertson.

Thomas Robertson (28 December 1864 – January 1924) was a Scottish footballer, who played for Cowlairs, Aston Villa, Queen's Park, St Bernard's and Scotland. [1] After retiring as a player, Robertson was a football referee and became president of the Scottish Football League. [1] Aston Villa Football Club is a professional football club based in Aston, Birmingham, England. The club currently competes in the Championship, the second tier of the English football league system. Founded in 1874, they have played at their current home ground, Villa Park, since 1897. Aston Villa were one of the founder members of the Football League in 1888 and of the Premier League in 1992. Villa are one of only five English clubs to have won the European Cup, in 1981–82. They have also won the Football League First Division seven times, the FA Cup seven times, the League Cup five times, and the UEFA Super Cup once.

St Ninian's High School is a six-year co-educational Roman Catholic state high school in Giffnock, East Renfrewshire, Scotland. The school, which opened in 1984, serves the areas of Giffnock, Clarkston, Thornliebank, Woodfarm, Newton Mearns, Eaglesham and Busby in East Renfrewshire and Arden, Darnley, and Deaconsbank in Glasgow. The school roll was 1,714 as of September 2005, and the Head Teacher is John Docherty. The school's motto is "Floreat Iuventus" which translates as "Let youth Flourish".

Drumchapel Amateur Football Club is a football club from the village of Duntocher, near Clydebank in Scotland. Formed in 1950 in the Drumchapel area of the city of Glasgow, they are nicknamed "The Drum". The club presently competes in the Central Scottish Amateur Football League and is viewed as one of the top amateur clubs in the country, winning the Scottish Amateur Cup as recently as 2005.

Thomas, Tom or Tommy Robertson may refer to:

David Robertson is a Scottish former footballer, who played as an attacking midfielder for Dundee United, St Johnstone, Greenock Morton, Livingston, Ayr United, Selkirk and Cowdenbeath. He won the Scottish Cup with Dundee United in 2010 and represented the Scotland under-21 team. Robertson retired from football in January 2017, after a civil case determined that he and David Goodwillie had committed an act of rape.

The 1928–29 Scottish Cup was the 51st staging of Scotland's most prestigious football knockout competition. The Cup was won by Kilmarnock who defeated Rangers in the final.

George Brown Key was a Scottish international footballer who played in both the Scottish and English football leagues. 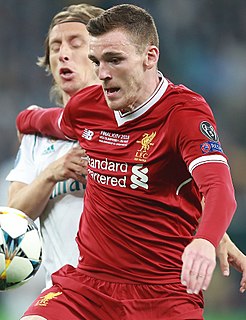 Andrew Robertson is a Scottish professional footballer who plays as a left back for Premier League club Liverpool and captains the Scotland national team.

Leitch Keir was a Scottish footballer

Thomas McMillan was a Scottish footballer.

William "Willie" Telfer was a Scottish footballer, who played for Blantyre Celtic, Motherwell, Airdrieonians and Scotland.

George Robertson was a Scottish footballer, who played for Irvine Meadow, Kilmarnock and Scotland.

Season 1938–39 was the 62nd Scottish football season in which Dumbarton competed at national level, entering the Scottish Football League for the 40th time and the Scottish Cup for the 51st time.

Archibald Lang was a Scottish footballer who played as a defender.

Season 1940–41 was the second Scottish football season in which Dumbarton competed in regional football during World War II.

William Robertson was a Scottish footballer who played as a right winger.