He studied divinity at the University of Edinburgh and was licensed to preach by the Church of Scotland in 1775, marrying Jane Jackson in the same year. He was minister first in Lauder then in Dalmeny. [1]

Joseph Black was a Scottish physicist and chemist, known for his discoveries of magnesium, latent heat, specific heat, and carbon dioxide. He was Professor of Anatomy and Chemistry at the University of Glasgow for 10 years from 1756, and then Professor of Medicine and Chemistry at the University of Edinburgh from 1766, teaching and lecturing there for more than 30 years.

Albert Edward Harry Meyer Archibald Primrose, 6th Earl of Rosebery, 2nd Earl of Midlothian, styled Lord Dalmeny until 1929, was a British liberal politician who briefly served as Secretary of State for Scotland in 1945. He was the Member of Parliament for Midlothian from 1906 to 1910. He became the Earl of Rosebery and Midlothian in 1929 and was thus a member of the House of Lords until his death.

The Right Honourable Alexander Maconochie, Lord Meadowbank of Garvock and Pitliver FRSE FSA (Scot), was a Scottish advocate, judge, landowner and politician. After 1854 he took the surname Maconochie-Welwood.

Dalmeny is a village and civil parish in Scotland. It is located on the south side of the Firth of Forth, 1 mile (1.6 km) southeast of South Queensferry and 8 miles (13 km) west of Edinburgh city centre. It lies within the traditional boundaries of West Lothian, and falls under the local governance of the City of Edinburgh Council.

George Husband Baird FRSE FSAScot was a Scottish minister, educational reformer, linguist and the Principal of the University of Edinburgh from 1793 to 1840. In 1800 he served as Moderator of the Church of Scotland General Assembly.

Rev John Logan FRSE (1748–1788) was a minister in Leith, Scotland, a popular preacher known also as a historian. Self-destructive behaviour saw him end his life as a hack writer in London.

James Stuart-Mackenzie PC FRSE FSA was a Scottish politician and joint founder of the Royal Society of Edinburgh in 1783. The second son of James Stuart, 2nd Earl of Bute, he served as Member of Parliament for various Scottish constituencies of the Parliament of the United Kingdom from 1742 to 1780. Stuart-Mackenzie was the British Minister at Turin from 1758 to 1761. He was made a Privy Councillor in 1761, and served as Keeper of the Privy Seal of Scotland from 1763 to 1765, and again from the following year until his death in 1800. 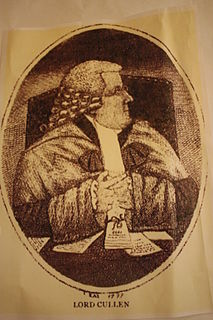 William Trail or Traill FRSE MRIA was a Scots-born mathematician, remembered for his mathematical text books. For the majority of his life, he served church duties in Northern Ireland.

Cosmo Gordon of Cluny FRSE (1736–1800) was a Scottish politician, agricultural improver and co-founder of the Royal Society of Edinburgh. He sat in the House of Commons from 1774 to 1777 and was a Baron of the Scottish Court of Exchequer from 1777 until his death. He was for several years Rector of Marischal College in Aberdeen.

Prof John Kemp FRSE LLD (1763–1812) was a Scottish mathematician, who settled in New York for most of his life.

Joseph McCormick FRSE FSA (1733–1799) was a Scottish clergyman who served as Moderator of the General Assembly of the Church of Scotland in 1782 and was a joint founder of the Royal Society of Edinburgh in 1783.

The Honourable Bouverie Francis Primrose (1813–1898) was a 19th-century British landowner and administrator.

James Thomson Gibson-Craig was a Scottish book collector and writer to the Signet.