Last updated March 26, 2021
For other people with the same name, see Thomas Rose.

Rose joined the Royal Flying Corps in 1917 and was posted to No. 64 Squadron later that year, flying DH.5s. The squadron was involved in the Battle of Cambrai in a ground-strafing role. It subsequently re-equipped with SE5as, which led to greater involvement in aerial combat. He was awarded the DFC in November 1918, having become a deputy flight commander. [2]

After leaving the RAF with the rank of flight lieutenant, Rose worked in aviation first taking a job at Brooklands in charge of Britain's first petrol station for aeroplanes which was opened there by the Anglo-American Oil Company in April 1927. In 1930 he gave several public aerobatic displays at Brooklands. He enjoyed notable success in air racing when he won the prestigious Kings Cup Air Race in 1935, flying the prototype Miles M.3 Falcon G-ADLC. The following year, in the same aircraft Rose gained the U.K to Cape Town passage record, at 3 days 17 hours and 38 minutes. [3]

Thomas Rose lived (for a time in retirement) in a house on Alderney, Channel Islands. The house, in Les Venelles, carries a blue plaque on the wall. [4]

RAF Tangmere was a Royal Air Force station located in Tangmere, England, famous for its role in the Battle of Britain. The famous Second World War aces Wing Commander Douglas Bader, and the then inexperienced Johnnie Johnson were stationed at Tangmere in 1941.

Wing Commander Lance Cleo "Wildcat" Wade DSO, DFC & Two Bars was an American pilot who joined the Royal Air Force (RAF) during the Second World War and became a flying ace. He remained with RAF until his death in a flying accident in 1944 in Italy. He was described as a "distinguished American fighter ace who epitomized perhaps more than any other American airman the wartime accords between Britain and the United States". 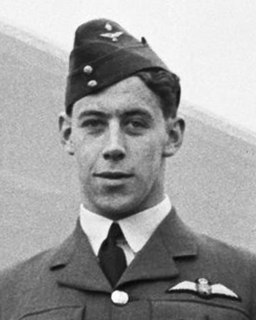 Edgar James Kain, DFC was a New Zealand fighter pilot and flying ace who flew in the Royal Air Force (RAF) during the Second World War.

RAF Montrose was a Royal Air Force (RAF) station in Forfarshire in Scotland. On 26 February 1913, it became the first operational military aerodrome to be established in the United Kingdom.

No. 46 Squadron of the Royal Flying Corps and the Royal Air Force, formed in 1916, was disbanded and re-formed three times before its last disbandment in 1975. It served in both World War I and World War II.

Neville Frederick Duke, was a British test pilot and fighter ace of the Second World War. He was credited with the destruction of 27 enemy aircraft. After the war, Duke was acknowledged as one of the world's foremost test pilots. In 1953, he became holder of the world air speed record when he flew a Hawker Hunter at 727.63 mph (1,171.01 km/h) over Littlehampton.

Air Vice Marshal Meredith Thomas, was a senior commander in the Royal Air Force during the Second World War. He began his career as a flying ace during the First World War, credited with five aerial victories.

No 501 Squadron was the 14th of the 21 flying units in the Royal Auxiliary Air Force, the volunteer reserve part of the British Royal Air Force. The squadron won seven battle honours, flying Hurricane, Spitfire and Tempest fighter aircraft during World War II, and was one of the most heavily engaged units in RAF Fighter Command. In particular, the Squadron saw extensive action during the Battle of France and Battle of Britain. At present the unit is not flying any more and has a logistics role as part of No 85 Expeditionary Logistics Wing.

Group Captain Billy Drake, was a British fighter pilot and air ace. He was credited officially with 18 enemy aircraft destroyed, two shared, two unconfirmed, four probables, two shared probables and five damaged and one shared damaged with the Royal Air Force during the Second World War. Further revisions to these statistics increased this total to 20 destroyed and seven damaged with a further 13 destroyed and four damaged on the ground.

William "Cherry" Vale, was a Royal Air Force (RAF) fighter pilot and flying ace of the Second World War. He was credited with 30 enemy aircraft shot down, shared in the destruction of three others, and claimed 6 damaged and another two shared damaged. His 20 kills achieved while flying the Hawker Hurricane and his 10 with the Gloster Gladiator made him the second highest scoring Hurricane and biplane pilot in the RAF, in both cases after Marmaduke Pattle.

Number 601 Squadron is a squadron of the RAF Reserves, based in London. The squadron battle honours most notably include the Battle of Britain, and the first Americans to fly in the Second World War were members of this squadron. Reactivated in 2017, it is a specialist squadron "tapping into the talents of leaders from industry, academia and research to advise and shape and inspire [the RAF]". 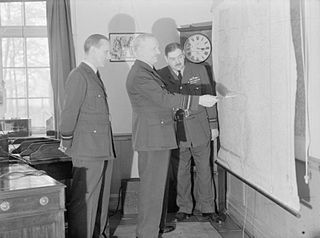 Air Vice Marshal Ronald Graham, was a First World War flying ace of the Royal Naval Air Service. Remaining in the Royal Air Force after that war, he rose to the rank of air vice marshal during the Second World War.

Captain Ian Donald Roy McDonald was a British World War I flying ace credited with 20 aerial victories. Although born in the British West Indies, he returned to England to serve in the air force. After his successful career in combat, he spent a short while at home before returning to the colours. He served in Iraq postwar, and was executed there by insurgents.

Richard Nigel Cullen, was an Australian fighter ace of World War II. Serving with the Royal Air Force (RAF), he was credited with as many as sixteen aerial victories before being killed in action during the Battle of Greece. Born in Newcastle, New South Wales, Cullen was living in London and had already seen action in the Spanish Civil War when he joined the RAF in 1937. Following the outbreak of World War II, he served initially as a transport pilot with No. 267 Squadron in the Middle East before seeking reassignment to fighters. He was then posted to No. 80 Squadron, flying Gloster Gladiator biplanes, and claimed six Axis aircraft before the unit converted to Hawker Hurricanes. Nicknamed "Ape" due to his physical bulk, Cullen was awarded the Distinguished Flying Cross for destroying five enemy aircraft in a single sortie on 28 February 1941. He was credited with another four victories in the one engagement on 3 March; the next day, he was shot down and killed while on escort duty over Albania, by a Regia Aeronautica Fiat G.50bis, at age twenty-three.

Captain Maxwell Hutcheon Findlay was a World War I flying ace credited with 14 aerial victories. He remained in the RAF postwar for several years before going on to a civilian aviation career that ended with his death in the Johannesburg Air Race of 1936.

Anthony Desmond Joseph "Tony" Lovell, was a fighter pilot and flying ace of the Royal Air Force during the Second World War. He served in the Battle of Britain, on Malta, and over France, but was killed in a flying accident shortly after the war in Europe had ended. 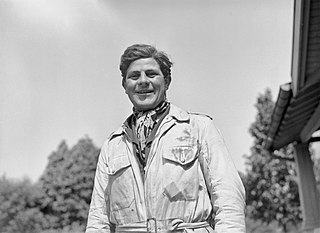 Redcar Aerodrome is a former First World War airfield located in Redcar, North Yorkshire, England. The site hosted an elementary flying school for newly entered pilots into the Royal Naval Air Service, though some offensive and defensive operations were flown from Redcar as well. The base was created as part of chain of new air stations after the German naval bombardment of east coast towns in December 1914. The base had a brief operational lifespan between July 1915 and December 1919, after which it was decided not to retain Redcar as an active station, and much of the site has been re-used for housing.