Last updated March 07, 2019
This article is about an American poet. For other people with the name, see Thomas Rowley.

Thomas Rowley (1721–1796) was a famous poet of Vermont, known both as the spokesman for Ethan Allen and dubbed “The Bard of the Green Mountains.” During his lifetime and before the American Revolution, his poetry gained the reputation with the catchphrase of "Setting the Hills on Fire." 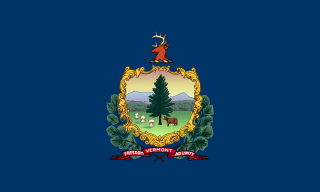 Vermont is a state in the New England region of the northeastern United States. It borders the U.S. states of Massachusetts to the south, New Hampshire to the east, New York to the west, and the Canadian province of Quebec to the north. Vermont is the second-smallest by population and the sixth-smallest by area of the 50 U.S. states. The state capital is Montpelier, the least populous state capital in the United States. The most populous city, Burlington, is the least populous city to be the most populous city in a state. As of 2015, Vermont was the leading producer of maple syrup in the United States. It was ranked as the safest state in the country in 2016.

Ethan Allen was a farmer, businessman, land speculator, philosopher, writer, lay theologian, American Revolutionary War patriot, and politician. He is best known as one of the founders of the U.S. state of Vermont, and for the capture of Fort Ticonderoga early in the American Revolutionary War along with Benedict Arnold. He was the brother of Ira Allen and the father of Frances Allen.

Thomas Rowley was born on March 24, 1721 in Hebron, Connecticut, the son of Samuel Rowley and Elizabeth Fuller and great grandson of Samuel Fuller (Mayflower). [1] Thomas married Lois Cass in Hebron in 1744 and they had seven known children in Hebron and Kent, Connecticut.

Kent is a town in Litchfield County, Connecticut, alongside the border with New York. The population was 2,858 at the 2000 census. The town is home to three boarding schools: Kent School, The Marvelwood School and South Kent School. The Schaghticoke Indian Reservation is also located within town borders.

Thomas Rowley moved to the town of Danby, Rutland County, Vermont in 1768, with his wife and family. The Rowleys are listed as some of the first settlers of Danby, Thomas was the first town clerk. In Rutland County, Thomas became acquainted with and joined with Ethan Allen and the Green Mountain Boys a growing Vermont militia named after the Green Mountains of Vermont comprised mostly from freemen in Rutland County and neighboring Addison County. The Green Mountain Boys were concerned New York would claim all the lands of Vermont known at the time as a dispute over the New Hampshire Grants. As Ethan Allen's spokesman, Rowley's poetry became legendary for the proverbial "setting the hills on fire." That is, he motivated the men of Vermont to fight for their independence as a state against the threat of the New York state feudal system.

Danby is a town in Rutland County, Vermont, United States. The population was 1,311 at the 2010 census.

Rutland County is a county located in the U.S. state of Vermont. As of the 2010 census, the population was 61,642, making it the second-most populous county in Vermont. Its county seat and most populous municipality is the city of Rutland. It is named after the English county of Rutland. 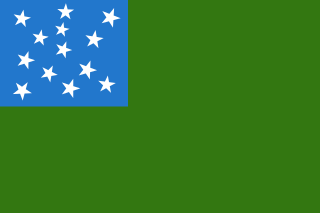 The Green Mountain Boys was a militia organization first established in the late 1760s in the territory between the British provinces of New York and New Hampshire, known as the New Hampshire Grants and later in 1775 as the Vermont Republic. Headed by Ethan Allen and members of his extended family, it was instrumental in resisting New York's attempts to control the territory, over which it had won de jure control in a territorial dispute with New Hampshire.

As early as 1774, Thomas Rowley moved even further north to the eastern shore of Lake Champlain to the town of Shoreham in Addison County, Vermont, with his wife and family. The state of New York was visible right across the lake. Here Thomas built a hotel. His land was known as "Rowley's Point" at the current landmark of Larabee's Point.

Shoreham is a town in Addison County, Vermont, United States. The population was 1,265 at the 2010 census.

After the war ended, Thomas Rowley returned to live in Shoreham as early as 1783. He is on record serving as the initial surveyor and clerk of Shoreham in 1783. He resided in Shoreham for the rest of his life as an innkeeper and farmer. Thomas died 1796 in Benson or Cold Springs, Vermont, at the home of his son, Nathan Rowley.

Benson is a town in Rutland County, Vermont, United States. The population was 1,056 at the 2010 census. The town is rural, with a concentration of several homes and businesses in Benson Village, at the intersection of Stage Road and Lake Road. Benson village is the centerpiece of a complex local economy that includes obstacle courses, a taco truck, the Wheel Inn tavern, a general store, an alpaca farm, a museum, a town transfer station, a do-it-yourself furniture store, a bookshop, three antique stores, a tungsten mine,a sandwich shop, and a quaint Bed and Breakfast throughout the town's main road.

Thomas Rowley's verses were mainly published in the Rural Magazine and the Bennington Gazette. One of Rowley's motivational poems, simply called "To Rutland Go" over the years, was originally published with a longer title which invited new settlers to Vermont as the paradise compared to New York, as follows: An Invitation to the Poor Tenants that Live Under Their Poor Patrons in the Province of New York, To Come and Settle on Our Good Lands, Under the New Hampshire Grants . This poem is exemplary of his style and message:

West of the Mountains Green
Lies Rutland Fair
The best that ever was seen
For land and air...
We value not New York
With all her Powers
Here we'll stay and Work
The land is Ours...
This is the noble land by conquest won
Took from a savage band by sword and gun
We drove them to the west, they could not stand the test

Rowley's poetry actually focused not only on politics, but also on the pleasantness and rustic nature of pioneer life, with humor and witty observations. For example, in another poetic inventory of his "estate", he sums up that he has virtually nothing, but still he was independent and happy. 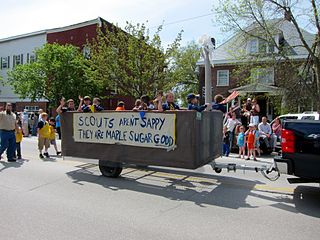 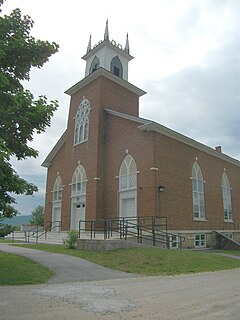 Pittsford is a town in Rutland County, Vermont, United States. As of the 2010 census, the town population was 2,991. Named for William Pitt, it has two picket forts used in the American Revolutionary War. 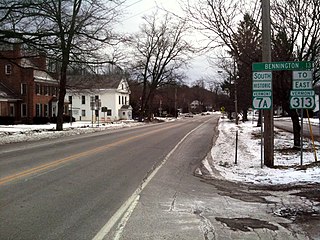 Arlington is a town in Bennington County, Vermont, United States. The population was 2,317 at the 2010 census.

Poultney is a town in Rutland County in the southwestern part of the U.S. state of Vermont. New York state is on its western border. Castleton, Vermont, is on its northern border. Poultney is home to Green Mountain College, a private liberal arts college with about 600 students. The Village of Poultney is entirely within the town. The town population was 3,432 at the 2010 census.

The Ethan Allen Express is a 241-mile (388 km) higher-speed passenger train service operated by Amtrak between New York City and Rutland, Vermont via Albany, New York. The scheduled total trip time is 5.5 hours. Operations are subsidized by the states of Vermont and New York, and the train is popular among vacationers travelling to the ski resort area of Killington, Vermont. The Ethan Allen Express is named for the American Revolutionary War hero Ethan Allen. Between Penn Station and Rensselaer, it operates along the Empire Corridor.

The Vermont Republic is a term used by historians to refer to the government of Vermont that existed from 1777 to 1791. In January 1777, delegates from 28 towns met and declared independence from the jurisdictions and land claims both of the British colony of Quebec and of the American states of New Hampshire and New York. They also abolished adult slavery within their boundaries. Many people in Vermont took part in the American Revolution, although the Continental Congress did not recognize the jurisdiction as independent. Because of vehement objections from New York, which had conflicting property claims, the Continental Congress declined to recognize Vermont, then known as the New Hampshire Grants. Vermont's overtures to join the Province of Quebec were accepted by the British, offering generous terms for the Republic's reunion. When the main British army surrendered in 1781, however, American independence became apparent. Vermont, now surrounded on three sides by American territory, rejected the British overtures and instead negotiated terms to enter the United States. In 1791, Vermont officially joined the United States as the 14th state.

Ira Allen was one of the founders of the U.S. state of Vermont and a leader of the Green Mountain Boys during the American colonial period. He was the younger brother of Ethan Allen.

Remember Baker was a member of the Green Mountain Boys. He was born in Roxbury, Connecticut and died in Quebec. The son of Remember Baker and Tamar Warner, he was a first cousin of Ethan Allen and Seth Warner. 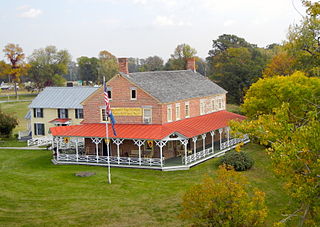 Chimney Point is a peninsula in the town of Addison, Vermont, which juts into Lake Champlain forming a narrows. It is one of the earliest settled and most strategic sites in the Champlain Valley.

Ebenezer "Indian" Allen (1743–1806) was an American soldier, pioneer, and member of the Vermont General Assembly.

Elisha Clark was a Vermont veteran of the American Revolution who was active in government, including serving as the state's first Auditor of Accounts.

Samuel Robinson, Jr. was an early Vermont political and military leader who served an officer in the American Revolution and as Speaker of the Vermont House of Representatives.