Thomas Royden may refer to:

James Stuart may refer to:

Acland is an English surname. The Aclands of Devon were an influential family, whose name was derived from Acland near Barnstaple. Notable people with the surname include:

Goff is a surname with several distinct origins, mainly Germanic, Celtic, Jewish, and French. It is the 946th most common family name in the United States. When the surname originates from England it is derived from an occupational name from German, Cornish and Breton. The German Goff means a godly person, a strong warrior, or a priest. The Breton goff means "smith". The English-originating surname is common in East Anglia, where it is of Breton origin. The Welsh name is a variant of the surname Gough, and is derived from a nickname for someone with red hair. The native Irish name is derived from a patronymic form of the Gaelic personal name Eochaidh/Eachaidh, which means "horseman".

Thomas Taylor may refer to:

John Foster may refer to: 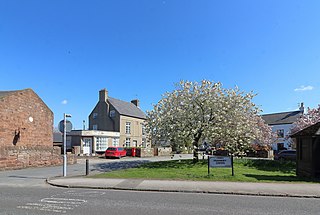 Frankby is a village on the Wirral Peninsula, in Merseyside, England. It is located between Greasby and Newton on the outskirts of the town of West Kirby. The hamlet of Larton is to the north west. Historically within the county of Cheshire, it is part of the Greasby, Frankby and Irby Ward of the Metropolitan Borough of Wirral and is in the parliamentary constituency of Wirral West.

The Royden Baronetcy, of Frankby Hall in the County Palatine of Chester, is a title in the Baronetage of the United Kingdom. It was created on 29 July 1905 for Thomas Royden, head of Thomas Royden & Sons, shipowners. He also served as Lord Mayor of Liverpool and represented Toxteth West in the House of Commons as a Conservative. His eldest son, the second Baronet, was Chairman of the Cunard Line and sat as Member of Parliament for Bootle. On 28 January 1944 he was created Baron Royden, of Frankby in the County Palatine of Chester, in the Peerage of the United Kingdom. However, the peerage became extinct on his death in 1950 while he was succeeded in the baronetcy by his younger brother, the third Baronet.

Edward Wakefield may refer to:

Agnes Maude Royden, later known as Maude Royden-Shaw, was an English preacher, suffragist and campaigner for the ordination of women.

Hogg is a Scottish or Irish surname.

Heneage may refer to:

Despencer or Despenser is an occupational surname referring to the medieval court office of steward, most commonly associated with Norman-English barons of the 13th- and 14th-centuries and their descendants. Notable people with this surname include:

Brassey is a surname. Notable people with the surname include:

Milles is a surname. Notable people with the surname include:

Estcourt is a surname. Notable people with the name include:

Royden may refer to: