Thomas Ruckle (1776–1853) [1] was a house painter and sign painter in early nineteenth-century Baltimore, Maryland, and an amateur painter. He is best known for his paintings The Battle of North Point, and The Defense of Baltimore. Ruckle was a veteran of the War of 1812, in which he had served as a corporal in the 5th Maryland Regiment of the Maryland Militia. [2]

Ruckle was born in Ireland and, having moved to Baltimore, Maryland, he became a sign painter and house painter. It is likely that he had very little, if any, formal training as an artist. [2]

Ruckle served as a Corporal [3] with the Washington Blues, a company of the 5th Maryland Regiment. [4]

Ruckle's paintings The Battle of North Point, and The Defense of Baltimore were painted shortly after the events they describe, and are now in the collection of the Maryland Historical Society. [2] The latter was included in an exhibit of American battle painting at the Museum of Modern Art in 1944. [5]

Ruckle's son Thomas Coke Ruckle (1811–1891) was also a painter. He received a formal training in fine art at the Royal Academy in London from 1839 to 1841. On his return to Maryland he became a successful portrait painter, working out of a studio in Baltimore St. He also worked as an illustrator, creating a series of scenes of the American West, and also a number of drawings for a volume titled Early History of Methodism in Maryland, published in 1866. [2] 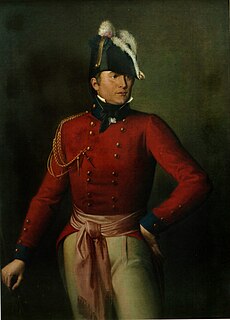 Major-General Robert Ross was an Irish-born officer in the British Army who served in the Napoleonic Wars and its theatre in North America in the War of 1812.

The Battle of Baltimore was a sea/land battle fought between British invaders and American defenders in the War of 1812. American forces repulsed sea and land invasions off the busy port city of Baltimore, Maryland, and killed the commander of the invading British forces. The British and Americans first met at the Battle of North Point. Though the Americans retreated, the battle was a successful delaying action that inflicted heavy casualties on the British, halted their advance and, consequently, allowed the defenders at Baltimore to properly prepare for an attack. 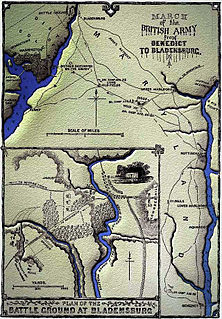 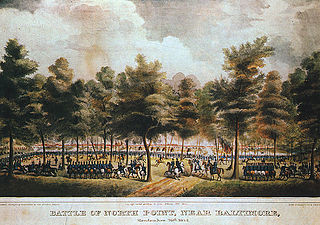 The Battle of North Point was fought on September 12, 1814, between General John Stricker's Maryland Militia and a British force led by Major General Robert Ross. Although the Americans retreated, they were able to do so in good order having inflicted significant casualties on the British, killing one of the commanders of the invading force, significantly demoralizing the troops under his command and leaving some of his units lost among woods and swampy creeks, with others in confusion. This combination prompted British colonel Arthur Brooke to delay his advance against Baltimore, buying valuable time to properly prepare for the defense of the city as Stricker retreated back to the main defenses to bolster the existing force. The engagement was a part of the larger Battle of Baltimore, an American victory in the War of 1812. 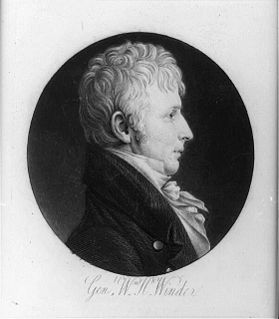 William Henry Winder was an American soldier and a Maryland lawyer. He was a controversial general in the U.S. Army during the War of 1812. On August 24, 1814, as a brigadier general, he led American troops in their disastrous defeat at the Battle of Bladensburg, which led to the Burning of Washington by British troops. Winder was court-martialed for his role in the battle, but acquitted of any wrongdoing. He later became a leading attorney of the Baltimore bar.

Defenders Day is a longtime legal holiday on September 12, in the U.S. state of Maryland, in the City of Baltimore and surrounding Baltimore County. It commemorates the successful defense of the city of Baltimore on September 12-13-14, 1814 from an invading British force during the War of 1812, an event which led to the writing of the words of a poem, which when set to music a few days later, became known as "The Star-Spangled Banner", which in 1931 was designated as the national anthem of the United States.

The Battle of Caulk's Field was fought during the War of 1812 in Kent County, Maryland between a small British Army force commanded by Captain Sir Peter Parker and American militia forces commanded by Lieutenant Colonel Philip Reed. Parker, who was operating in the Chesapeake Bay region as part of the British campaign against Baltimore, Maryland, landed on the eastern shore of the Chesapeake Bay to move against Reed's militia encampment. The British attacking force encountered American skirmishers, who conducting a fighting retreat, drawing the British towards the main American line. Parker was mortally wounded during the fight, and the British force withdrew after Parker fell. Later British setbacks at the Battle of North Point and the Battle of Fort McHenry led the British to abandon their campaign against Baltimore. In 2012, the battlefield was the site of an archaeological survey.

During the American Civil War (1861–1865), Maryland, a slave state, was one of the border states, straddling the South and North. Despite some popular support for the cause of the Confederate States of America, Maryland would not secede during the Civil War. Because the state bordered the District of Columbia and the strong desire of the opposing factions within the state to sway public opinion towards their respective causes, Maryland played an important role in the war. Newly elected 16th President Abraham Lincoln, suspended the constitutional right of habeas corpus from Washington DC to Philadelphia, PA; and he dismissed Chief Justice Roger B. Taney of the U.S. Supreme Court's "Ex parte Merryman" decision in 1861 concerning freeing John Merryman, a prominent Southern sympathizer from Baltimore County arrested by the military and held in Fort McHenry. The Chief Justice had held that the suspension was unconstitutional and could only be done by Congress and would leave lasting civil and legal scars. The decision was filed in the U.S. Circuit Court for Maryland by Chief Justice Roger Brooke Taney, a Marylander from Frederick and former member of the administration of the seventh President Andrew Jackson, who had nominated him two decades earlier. 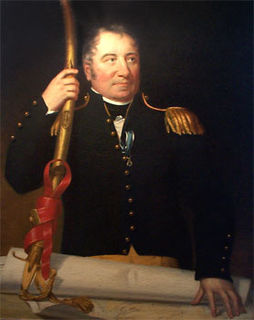 Brigadier General John Stricker (1758–1825) was a Maryland state militia officer who fought in both the American Revolutionary War in the First Maryland Regiment of the famous "Maryland Line" of the Continental Army and in the War of 1812. He commanded the Third Brigade of the Maryland state militia in the Battle of North Point on Monday, September 12, 1814, which formed a part of the larger Battle of Baltimore, along with the subsequent British naval bombardment of Fort McHenry on September 13-14th, and was a turning point in the later months of the War of 1812 and to the peace negotiators across the Atlantic Ocean for the Treaty of Ghent, in the city of Ghent then in the Austrian Netherlands,, which finally arrived at a peace treaty on Christmas Eve of December 1814, of which news finally reached America in February 1815. 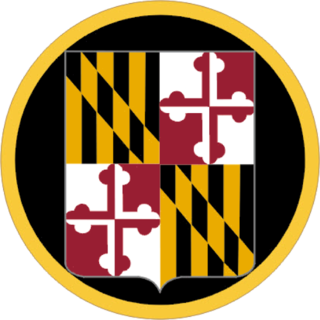 The Maryland Army National Guard is the United States Army component of the U.S. state of Maryland. It is headquartered at the old Fifth Regiment Armory at the intersection of North Howard Street, 29th Division Street, near Martin Luther King, Jr. Boulevard in Baltimore and has additional units assigned and quartered at several regional armories, bases/camps and other facilities across the state. 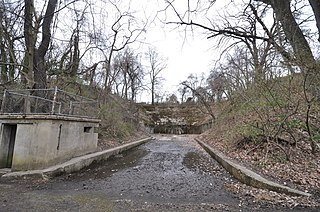 Fort Howard was a military installation located on the North Point peninsula, overlooking the main channel of the Patapsco River leading into the harbor of Baltimore, Maryland, USA. Although militarily important since the early 19th century, its surviving elements and name date to the Spanish–American War. It was named by Elihu Root, Secretary of War under President Theodore Roosevelt, in 1902 after Colonel John Eager Howard (1752–1827). The installation earned the nickname the "Bulldog at Baltimore's Gate", serving as the coastal artillery headquarters for Baltimore, Maryland. Fort Howard's historical significance is its military connection with the War of 1812, the Spanish–American War, and World War II.

A Flying Camp was a military formation employed by the Continental Army in the second half of 1776, during the American Revolutionary War. 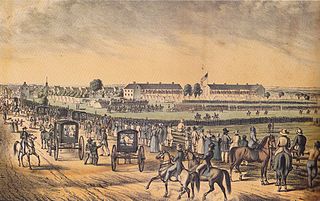 George Hume Steuart (1790–1867) was a United States general who fought during the War of 1812, and later joined the Confederate States of America during the Civil War. His military career began in 1814 when, as a captain, he raised a company of Maryland volunteers, leading them at both the Battle of Bladensberg and the Battle of North Point, where he was wounded. After the war he rose to become major general and commander-in-chief of the First Light Division, Maryland Militia. 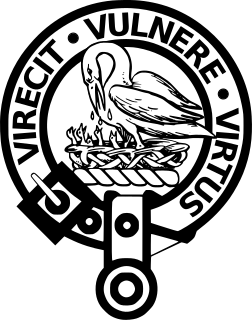 The Steuart family of Maryland was a prominent political family in the early History of Maryland. Of Scottish descent, the Steuarts have their origins in Perthshire, Scotland. The family grew wealthy in the early 18th century under the patronage of the Calvert family, proprietors of the colony of Maryland, but would see their wealth and status much reduced during the American Revolution, and the American Civil War.

The 175th Infantry Regiment is an infantry regiment of the Maryland Army National Guard. It is one of several National Guard units with colonial roots and campaign credit for the War of 1812.

Sir Arthur Brooke KCB was an Irish officer of the British Army during the French Revolutionary and Napoleonic Wars, and the Peninsular War and War of 1812. He rose to the rank of lieutenant-general.

The Adjutant General of Maryland is the head military official of the Maryland National Guard, the Maryland Defense Force, and any other military or paramilitary units that may be maintained by the State of Maryland. The adjutant general is responsible for the military department's budget and maintains all State-owned armories in Maryland.