Thomas Russell CMG (c. 1830 – 2 September 1904) was a lawyer, politician, businessman and entrepreneur in 19th-century New Zealand. Russell was one of the first two New Zealand-trained lawyers admitted to the bar. He was the founder of a number of major New Zealand-based companies including the Bank of New Zealand and the New Zealand Insurance Co. He served as Minister of Colonial Defence during the New Zealand Wars.

Russell was born in County Cork, Ireland, probably in 1830. His parents were Thomas Flower Russell (c. 1808-1873) and Mary Roberts (c. 1811-1847). [1] The family emigrated to Australia as steerage passengers in 1833, and settled in Maitland, New South Wales, where his father farmed. [2] In 1840 the family moved on to New Zealand, living in Kororakea at first, then Auckland where his father worked as a builder. From 1844 Thomas Russell was articled to the lawyer Thomas Outhwaite and on 4 November 1851 was admitted as a solicitor on the roll of the Supreme Court of New Zealand. [3] He became Outhwaite's partner and later took over his practice. [4]

Russell was elected as MP for Auckland City East in 1861, holding the electorate until his retirement from politics in 1866. He became a cabinet minister under Alfred Domett in August 1862, and was Minister of Defence in the administration led by Frederick Whitaker and William Fox in 1863–1864. During this time the New Zealand Settlements Act (1863) was passed, facilitating the confiscation of Māori-owned land. [6] [7]

Russell was appointed a Companion of the Order of St Michael and St George in 1877. [8]

In 1866 he bought the Pah farm in present-day Hillsborough. In January 1872, Cyrus Haley, who had a grudge against Russell, attacked the home (later replaced by the Pah Homestead), firing shots into each of the bedrooms. No-one was hurt and Haley was later caught and convicted of attempted murder. [2]

Sir Frederick Whitaker was an English-born New Zealand politician who served twice as the premier of New Zealand and six times as Attorney-General. 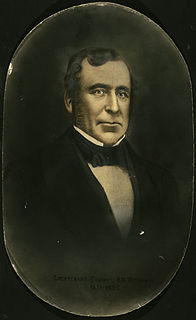 William Swainson became the second, and last, Attorney-General of the Crown colony of New Zealand and instrumental in setting up the legal system of New Zealand. He was the first Speaker of the New Zealand Legislative Council. 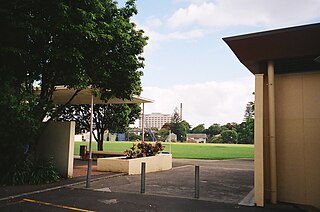 The Outhwaite family were early settlers in Auckland, New Zealand and were a prominent family in Auckland in the first 85 years of the city's existence. They made substantial contributions to the legal, administrative, musical, literary, artistic, social and sporting life of the city. They were also important in the establishment and growth of the Catholic Church in Auckland and through their social and philanthropic activities. Their influence still continues, especially in respect of their donation of two areas of land in the central Auckland suburb of Grafton which are now Outhwaite Park and St Peter's College. The family also enabled the creation of a conservation reserve in the Hen and Chicken Islands.

The Pah Homestead is a historic home located in the suburb of Hillsborough in Auckland, New Zealand. It is owned by the Auckland Council, and is currently used as an art gallery, housing the James Wallace Art Trust's collection of New Zealand art. Since opening in August 2010, the gallery has attracted over 410,000 visitors, including 130,000 in its first year

Early New Zealand Books (ENZB) is a project from the library of the University of Auckland, New Zealand, launched in 2005, that aims at providing keyword-searchable text of significant books published about New Zealand in the first two-thirds of the nineteenth century. It also includes the subsequently published memoirs, journals and correspondence of people active in this era. The project has been funded and managed by the University of Auckland Library and is freely available on the internet.

James Williamson was a 19th-century Member of Parliament, merchant and land speculator in the Auckland Region, New Zealand.

Cyrus Haley was a New Zealand arsonist. He was born in Leeds, Yorkshire, England on 22 September 1832 and migrated to Auckland, New Zealand, in 1870.

Richard Davies Ireland was an Australian politician, a member of the Victorian Legislative Assembly and Attorney-General. 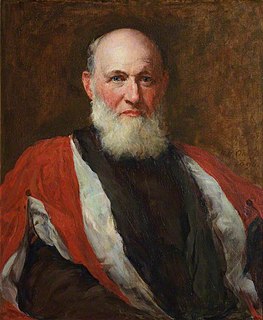 James Porter was a British academic in the second half of the 19th century.