Great Bedwyn was a parliamentary borough in Wiltshire, which elected two Members of Parliament (MPs) to the House of Commons from 1295 until 1832, when the borough was abolished by the Great Reform Act. 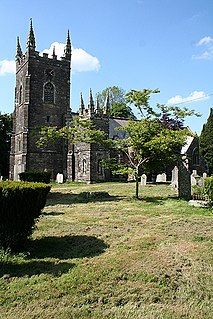 Stephen Patrington was a medieval Bishop of St. David's and Bishop of Chichester.

Thomas Polton was a medieval Bishop of Hereford, Bishop of Chichester, and Bishop of Worcester.

Richard Baynard was an English administrator, MP and Speaker of the House of Commons of England in 1421.

John Russell was an English landowner and Justice of the Peace who was elected Speaker of the House of Commons of England in 1423 and 1432.

William Burley was MP for Shropshire nineteen times and Speaker of the House of Commons of England.

Robert Walsh, of Lincoln, was an English politician.

Christopher Curwen was an English soldier, administrator and politician.

John Dolyte or Tolite of Chichester, Sussex, was an English politician.

Henry Somer was a mediaeval English courtier and Member of Parliament who was Chancellor of the Exchequer. Somer's tenure as Chancellor occurred during the Great Bullion Famine and the beginning of the Great Slump in England.

Robert Carlisle, of Carlisle, Cumberland, was an English politician.