Thomas Russell Gerry (December 8, 1794 – October 8, 1848) was an American sailor who was active in the Sons of the American Revolution and was a son of the fifth U.S. Vice President Elbridge Gerry. [1]

Gerry was born on December 8, 1794, in Cambridge, Massachusetts. He was one of ten children born to Elbridge Gerry (1744–1814), a Founding Father, Massachusetts Governor and U.S. Vice President, and Ann (née Thompson) Gerry (1763–1849), who was near twenty years his father's junior. [2] At his parent's wedding, his father's best man was his good friend James Monroe. [3]

His maternal grandfather Charles Thompson was a wealthy New York merchant who served as secretary of Congress. [4] [3] His paternal grandparents were Thomas Gerry (1702–1774), a merchant who operated ships out of Marblehead, [5] and Elizabeth (née Greenleaf) Gerry (1716–1771), the daughter of a successful Boston merchant. [6]

On December 6, 1814, Gerry was appointed and served as a midshipman [7] in the United States Navy. [8] His brother, James Thompson Gerry (1797–1854), was commander of the USS Albany, a United States Navy war sloop, when it was sunk on September 28, 1854. [9] In November 1818, [10] his mother Ann wrote to the Smith Thompson, Secretary of the Navy, soliciting his promotion and expressing thanks for the promotion of his elder brother, Elbridge Gerry Jr. (1793–1867) [11] In February 1822, his brother Elbridge also wrote to the Secretary of the Navy recommending his Thomas' promotion to Lieutenant. [10]

On June 30, 1830, [4] Gerry was married to Hannah Green Goelet (1804–1845), the daughter of merchant Peter P. Goelet and Almy (née Buchanan) Goelet. She was the aunt of Robert Goelet, a businessman and yachtsman, [14] and the granddaughter of Peter Goelet, a merchant and real estate developer. [15] Her brother, Peter Goelet, left part of his vast estate to their son Elbridge upon his death in 1879. [16] Together, they were the parents of: [17]

Gerry died on October 8, 1848 in New Rochelle, New York. At the time of his death, his children were very young and had to be raised by their mother. [27]

Regis Henri Post was a New York politician and the governor of Puerto Rico from April 17, 1907 to November 6, 1909. He was born in Suffolk County, New York. 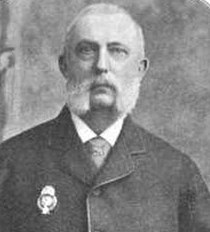 Elbridge Thomas Gerry, usually called "Commodore" Gerry due to the office he held with the New York Yacht Club from 1886 to 1892, was an American lawyer and reformer who was the grandson of U.S. Vice President Elbridge Gerry.

Chepstow is an Italianate house museum located at 120 Narragansett Avenue in Newport, Rhode Island, built in 1860. It originally served as a summer "cottage", but the Preservation Society of Newport County now owns the property. It was listed in the National Register of Historic Places as part of the Ochre Point-Cliffs Historic District in 1975 and within the Historic District of the City of Newport.

Robert Livingston Gerry Sr. was an American businessman and owner of thoroughbred racehorses. 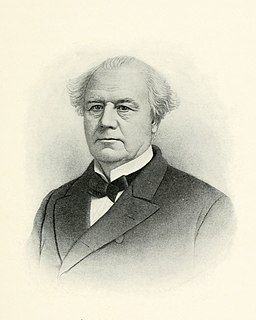 Lewis Gouverneur Morris was an American maritime advocate and sheep and cattle breeder who was a member of the prominent Morris family of Morissania.

Peter Goelet was a merchant and real estate entrepreneur of New York City.

Maturin Livingston, a member of the prominent Livingston family, was an American lawyer and politician from New York.

Ogden Goelet was an American heir, businessman and yachtsman from New York City during the Gilded Age. With his wife, he built Ochre Court in Newport, Rhode Island, his son built Glenmere mansion, and his daughter, Mary Goelet, married Henry Innes-Ker, 8th Duke of Roxburghe.

The Goelet family is an influential family from New York, of Huguenot origins, that owned significant real estate in New York City.

Robert James Livingston, a member of the Livingston family, was a prominent businessman from New York.

Robert Goelet Sr. was an American businessman and co-founder of the Chemical Bank of New York.

John Busteed Ireland was an American lawyer, writer, and landowner.