Carter was born in Dallas, Texas to Thomas Smith and Matilda (née Dowell) Carter. He attended Southern Methodist University where he earned a Bachelor of Science degree in civil engineering in 1944. He also attended the University of Kansas and earned his master's degree in engineering management in 1991. Carter has worked as an engineer for the Louisiana and Arkansas Railway, Missouri–Kansas–Texas Railroad, and Oklahoma, Kansas and Texas Railroads. He also has served with the Kansas City Southern Railway as its chief engineer, vice president of operations, and vice president. He also served as vice president of the Louisiana and Arkansas Railway in the 1960s. [2] Carter was married to Janet Hostetter from 1946 until her death in 1981, and with her had four children. Grandfather of Christian "Cozy" Koehler. [3]

Mark William Hemphill was the editor of Trains magazine from September, 2000, until July, 2004. Prior to joining Trains he served as assistant editor of HyRail Production's CTC Board magazine.

The Louisiana and Arkansas Railway was a railroad that operated in the states of Arkansas, Louisiana, and Texas. The railroad's main line extended 332 miles, from Hope, Arkansas to Shreveport and New Orleans. Branch lines served Vidalia, Louisiana, and Dallas, Texas.

The Texarkana and Fort Smith Railway was the Texas subsidiary of the Kansas City Southern Railway, operating railroad lines in the states of Arkansas and Texas, with headquarters at Texarkana, Texas.

Albert Alonzo Robinson, sometimes referred to as Albert A. Robinson or A. A. Robinson, was an American civil engineer who rose through the ranks of the Atchison, Topeka and Santa Fe Railway to eventually become the railroad's vice president and general manager. After resigning from the Santa Fe, Robinson became president of the Mexican Central Railway. 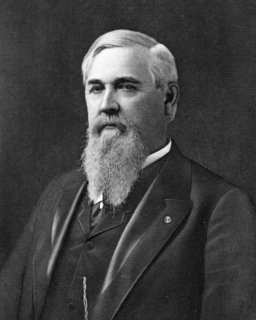 Samuel Wesley "Colonel" Fordyce was a prominent railroad executive of the American South. He served on several boards of directors and as president of a few railroads. Fordyce was also the receiver for several railroads when they declared bankruptcy.

The Arkansas, Louisiana and Mississippi Railroad is a 52.9-mile (85.1 km) short-line railroad in northern Louisiana and southern Arkansas. Opened in 1908, it has undergone several corporate reorganizations, but has remained independent of larger carriers. In 2004, paper producer Georgia-Pacific sold the company to shortline operator Genesee & Wyoming Inc. Traffic generally consists of lumber, paper, forest products, and chemicals.

Harvey Crowley Couch, Sr., was an Arkansas entrepreneur who rose from modest beginnings to control a regional utility and railroad empire. He is regarded as the father of Arkansas Power and Light Company and other electric utilities now part of Entergy; he helped mold the Louisiana and Arkansas Railway and the Kansas City Southern Railway into a major transportation system. His work with local and federal government leaders during World War I and the Great Depression gained him national recognition and earned him positions in state and federal agencies. He also established Arkansas' first commercial broadcast radio station.

The Fort Smith and Western Railway was a railroad that operated in the states of Arkansas and Oklahoma.

Randle Thomas Moore, Sr., was an eminent figure in the development of northwestern Louisiana during the latter part of the 19th century and the first half of the 20th century. Moore is best known to Louisiana history, of which he was a keen student, for a physical confrontation that he had on the streets of downtown Shreveport with the legendary Huey Pierce Long, Jr.

William Neal Deramus Jr. was an American railroad executive. He served as the longest running president of the Kansas City Southern Railway (KCS) from 1941 to 1961. Deramus led the Kansas City Southern Railway through the Great Depression by encouraging industry to locate on the Gulf Coast in Louisiana and Texas. He helped the railway avoid bankruptcy in the 1930s and refinanced $67 million in bonded debt that fell due in the late 1940s.

Article X of the Texas Constitution of 1876 covers railroad companies and the creation of the Railroad Commission of Texas. The federal government later created the Interstate Commerce Commission to regulate railroads, and eight of the nine sections of Article X were repealed in 1969 as "deadwood".

Arthur Clinton Spurr was an American lawyer, manager, consulting engineer, business executive at the Wheeling Traction Company and President of the Monongahela Power Company. He is known as public utility executive and investment counselor, and as recipient of the Henry Laurence Gantt Medal in 1949.

William C. Edenborn (1848–1926) was an inventor, steel industrialist, and railroad magnate. He patented the design for a machine for inexpensive manufacture of barbed wire. Edenborn founded the Louisiana Railway and Navigation Company, which operated between Shreveport, Louisiana, and New Orleans, Louisiana. Through a series of mergers and acquisitions, this railroad formed the Louisiana and Arkansas Railroad and eventually part of the Kansas City Southern Railroad.

William Russell Pickering referred to as W.R. Pickering was a miner, lumber baron, developer, railroad owner and banker. From his first business adventure in mining lead, in Joplin, Missouri in 1872, and his partnership with Ellis Short in the merchandise business at Joplin, the empire grew across several states, including Missouri, Arkansas, Indian Territory, Louisiana, Texas, and California.