In 1893 Denver received a new municipal charter by the state legislature that decentralized much of the mayor's powers into six different administrative departments, two of which were elected, two appointed by the mayor, and the remaining two appointed by the governor. Clyde Lyndon King, in his doctoral thesis writes "The plan gave the maximum of opportunity for [political] party groups and corporate control." The municipal board members appointed by the governor had complete financial control over the police, fire, and excise departments. Over half the expenditures of the city went through this board which gave the governor and his party much direct control over Denver. That the governor, elected by the entire state, had so much power over the workings of Denver was not lost on the citizens of the city. [3]

One of the other key issues leading up to the Denver mayoral election of 1895 was Denver Tramway's monopoly over the public transportation in the city. In 1885 Denver Tramway had revised its charter so that it was no longer required to add extensions or provide better service, but while there was competition it still did so. In 1893 it merged with the only other public transportation firm in the city and came into a monopoly. Resentment began to grow as the city took actions which favorably impacted Denver Tramway but received no financial compensation in return. [3]

In 1895, Thomas McMurry ran for mayor of Denver on a political platform of "divorcing the city's government from the city's public-service corporations." Previous to this election, Denver had always voted for straight Democrat or Republican tickets. McMurry was the first non-partisan mayor elected in Denver's history. Denver Tramway offered the city a token sum of $50,000 but McMurry vetoed this offering, wanting instead a small percentage of the company's yearly profits. [3]

Another issue in the 1895 election involved the water utilities. Leading up to the election some of the local water utilities had gone bankrupt and a new public-service corporation was created, the Denver Union Water Company, which acquired the previous nine independent utilities. In the election the citizens of Denver were asked whether they wanted to stay with this new corporation or build a new municipal water utility. Denver Union Water promised to abide by all previous charters and a new city council was elected that was evenly divided between the two options. However, after the election Denver Union Water said that conflicting clauses in the different charters made it impractical to implement its previous rates and offered a solution that it said would ultimately reduce rates. A court injunction demanded that the water company fix its rates as laid out in its contract, but the company continued to use its own solution. [3]

The issue of water bill rates was the single largest concern in the election of 1897. Many water users refused to pay their water bills and McMurry was re-elected "with the help of the Civic Federation and the vote of the women." [3] More court injunctions were issued, ordinances were passed, and fines were assessed but Denver Union Water ignored all of them. In a case brought by McMurry before the District Court of Arapahoe County, the court sided with the water company and found that conflicting clauses were impractical to implement and allowed the water company to increase its rates. McMurry continued to pressure the company to lower its rates, but had no power to force it to do so. [3]

In 1899 the public corporations were determined to defeat McMurry and campaigned against him. King notes, "In the [1899 mayoral] campaign certain members of the Democratic party, motivated and financed by the city's public service corporations, organized the 'big mitt,' the famous ballot-box stuffing brigade. By many it is charged and believed that McMurray's defeat was due solely to ballot-box stuffing." McMurry lost the election and his successor, Henry V. Johnson, who had agreed on the campaign trail about divorcing the city's government and corporations, accepted Denver Tramway's revised one-time payment of $72,000. With McMurry's defeat the public-service corporations did not see a significant challenge to their power for another decade. [3] 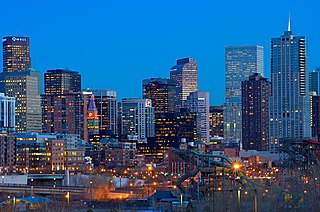 Denver, officially the City and County of Denver, is the capital and most populous city of the U.S. State of Colorado. Denver is located in the South Platte River Valley on the western edge of the High Plains just east of the Front Range of the Rocky Mountains. With an estimated population of 727,211 in 2019, Denver is the 19th-most populous city in the United States, the fifth-most populous state capital, and the most populous city located in the Mountain states. The metropolitan area surrounding Denver represents a majority of the population and economic activity in the Front Range region, the area where an estimated 85% of Colorado's population lives. The Denver downtown district is immediately east of the confluence of Cherry Creek and the South Platte River, approximately 12 mi (19 km) east of the foothills of the Rocky Mountains. Denver is named after James W. Denver, a governor of the Kansas Territory. It is nicknamed the Mile High City because its official elevation is exactly one mile above sea level. The 105th meridian west of Greenwich, the longitudinal reference for the Mountain Time Zone, passes directly through Denver Union Station.

The Chicago, Burlington and Quincy Railroad was a railroad that operated in the Midwestern United States. Commonly referred to as the Burlington Route, the Burlington, or as the Q, it operated extensive trackage in the states of Colorado, Illinois, Iowa, Missouri, Nebraska, Wisconsin, Wyoming, and also in Texas through subsidiaries Colorado and Southern Railway, Fort Worth and Denver Railway, and Burlington-Rock Island Railroad. Its primary connections included Chicago, Minneapolis–Saint Paul, St. Louis, Kansas City, and Denver. Because of this extensive trackage in the midwest and mountain states, the railroad used the advertising slogans "Everywhere West", "Way of the Zephyrs", and "The Way West".

John Wright Hickenlooper Jr. is an American politician, businessman, and geologist serving as the junior United States Senator from Colorado since 2021. A member of the Democratic Party, Hickenlooper was mayor of Denver from 2003 to 2011 and governor of Colorado from 2011 to 2019.

Davis Hanson Waite was an American politician. He was a member of the Populist Party, and he served as the eighth Governor of Colorado from 1893 to 1895.

Hazen Stuart Pingree was a four-term Republican mayor of Detroit (1889–1897) and the 24th Governor of the U.S. State of Michigan (1897–1901). A Yankee who migrated from New England, he was a successful Republican businessman turned politician.

Horace Austin Warner ("Haw") Tabor, also known as The Bonanza King of Leadville, was an American prospector, businessman, and Republican politician. His life is the subject of Douglas Moore's opera The Ballad of Baby Doe and the 1932 Hollywood biographical movie Silver Dollar. Also, Graham Masterton's 1987 novel Silver has a protagonist named Henry T. Roberts, whose life includes incidents from Tabor's.

The Kansas Corporation Commission (KCC) is the public utilities commission of the state of Kansas run by three Commissioners appointed by the Governor with the approval of the Senate. The Commission has the responsibility of ensuring that natural gas, electricity, telephone, and transportation vendors provide safe, adequate, and reliable services at reasonable rates. Notwithstanding the commission's name, it does not charter corporations; that function is performed by the office of the Secretary of State.

The Denver Tramway, operating in Denver, Colorado, was a streetcar system incorporated in 1886. The tramway was unusual for a number of reasons: the term "tramway" is generally not used in the United States, and it is not known why the company was named as such. The track was 3 ft 6 in narrow gauge, an unusual gauge in the United States, but in general use by railways in Japan, southern Africa, New Zealand, and Queensland, Australia.

The Government of Denver makes up the public sector of the City and County of Denver, Colorado.

The history of Denver details the history of the City, and County of Denver, Colorado, the United States from its founding in 1858 to modern-day. Located on the banks of the South Platte River close to the foothills of the Rocky Mountains, Denver was founded in November 1858 as a gold mining town. The gold quickly dried up and the city moved to become a supply hub for new mines in the mountains. Denver grew rapidly, becoming the new county seat of Arapahoe County and eventually the state capital. Investors from Denver built a rail line from Cheyenne to western Kansas which traveled through Denver, bringing new people and supplies. New roads and improvements to rail and air travel in the early twentieth century made Denver a hub for transportation. Until World War II Denver's economy was dependent mainly on the processing and shipping of minerals and ranch products. With war looming, Denver was in a prime location for more federal activity, being situated far from either coast. After the war, oil and gas companies fueled a skyscraper boom in the downtown area. With the combined spending of the energy companies and the federal government, Denver expanded quickly. Denver went from having a small urban core surrounded by rural farms to a booming downtown dotted with skyscrapers and surrounded by growing suburbs.

The Oklahoma Corporation Commission is the public utilities commission of the U.S state of Oklahoma run by three statewide elected commissioners. Authorized to employ more than 400 employees, it regulates oil and gas drilling, utilities and telephone companies. 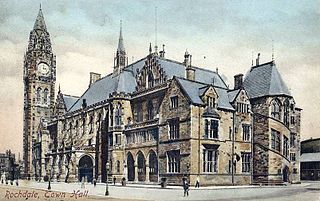 Rochdale was, from 1856 to 1974, a local government district coterminate with the town of Rochdale in the northwest of England.

Cole Finegan is an American lawyer who served as Denver’s City Attorney and Chief of Staff to then Mayor John Hickenlooper from 2003 through 2006. He is now the Regional Managing Partner of the Americas for Hogan Lovells and Managing Partner of the global legal giant's Denver office. Finegan also acts as an adviser to Governor Hickenlooper and U.S. Senator Michael Bennet, and serves as Finance Chair for Senator Bennet’s 2016 re-election campaign and was a Co-Chair of Governor Hickenlooper’s re-election campaign. He was one of only four Colorado Finance Co-Chairs for President Obama’s 2012 re-election campaign. Finegan was selected as a "Lawyer of the Decade" by Law Week Colorado; as Lawyer of the Year 2013; and was also named one of the most influential people in Denver by 5280 magazine.

The following is a timeline of the history of the city of Denver, Colorado, United States from its founding in 1858 to the present.

The Denver streetcar strike of 1920 was a labor action and series of urban riots in downtown Denver, Colorado, beginning on August 1, 1920, and lasting six days. Seven were killed and 50 were seriously injured in clashes among striking streetcar workers, strike-breakers, local police, federal troops and the public. This was the "largest and most violent labor dispute involving transportation workers and federal troops".