Thomas Sylvester Riley ( né  Thomas Owen Riley;January 8,1852 –December 28,1938) was an American lawyer,politician,and businessperson who was based in West Virginia. Riley was the state's eleventh attorney general from March 4,1893,until March 3,1897.

Riley was born to Irish immigrant parents in Marshall County,which was then part of Virginia. He graduated from West Liberty State Normal School in 1877,and subsequently read law under Wheeling-based lawyer James Dallas Ewing,and was admitted to practice law in 1878. He formed a partnership with Ewing,which was later joined by West Virginia attorney general Thayer Melvin. In 1887,Riley was elected chairperson of the West Virginia Democratic Party State Executive Committee,serving until 1892.

From 1890 to 1892,Riley served on the Board of Regents for West Virginia State Normal Schools. He was elected Wheeling’s city solicitor in 1891 and the following year,he was elected West Virginia's attorney general. Riley unsuccessfully ran for election to represent West Virginia's 1st congressional district in the United States House of Representatives in 1906 and was appointed to the West Virginia School Book Commission in 1912. Riley continued to practice law until his death.

Riley was born as Thomas Owen Riley on January 8,1852,in Marshall County,which was then part of Virginia. [1] [2] [3] His parents,Owen Riley and Mary Dailey Riley,were born in Ireland and emigrated to the United States. [1] Riley spent his early life on a farm and was educated in the local public schools,where he taught after graduation. [2] He commenced his post-secondary education at Fairmont State Normal School in 1875,then attended West Liberty State Normal School from 1876 until graduation in 1877. [2] [3] In July 1877,Riley began reading law in the law office of Wheeling-based lawyer James Dallas Ewing. [2]

Riley was admitted to practice law on October 26,1878, [2] and he formed a law partnership with Ewing. [2] [4] In 1881,Riley's and Ewing's firm was joined by West Virginia attorney general Thayer Melvin following Melvin’s resignation as Judge of the First Judicial District. [2] [5] [6] The firm became known as Ewing,Melvin,and Riley,and continued thus until Riley’s departure in 1894. [2] [5] [6] In October 1890,Riley was admitted to practice at the Supreme Court of the United States. [7] In April 1898,Riley was elected a director of the Consolidated Building Loan and Trust Company,and was selected as the company’s attorney. [8]

In February 1912,Governor William E. Glasscock appointed Riley a member of the West Virginia School Book Commission,which was created under a 1909 act of the West Virginia Legislature to contract for uniform textbooks for the state’s public schools. [26] [27] [28] In 1913,Riley was rumored as a candidate for United States Attorney in the Northern District of West Virginia after several of his friends from Wheeling visited Washington,D.C.,to advocate for his selection in opposition to the appointment of Stuart W. Walker. [29] [30]

Riley served as a director of both St. Vincent’s Home for Girls and St. John’s Home for Boys in Elm Grove. [35] Riley was also a member and president of the local Catholic organization,Knights of St. George of Wheeling. [36]

Riley served as the attorney for Bishop of Wheeling Patrick James Donahue until the bishop's death in 1922,and as the attorney for Donahue’s successor Bishop John Joseph Swint until Riley’s death in 1938. [37] [38] In 1907,Bishop Donahue made Riley trustee of his estate,which included 66 sections of West Texas oil lands. [38] In 1922,Riley commissioned the building of the Riley Law Building at the corner of 14th and Chapline Streets in Wheeling. [39]

Riley continued to practice law until January 1938. [1] After suffering a long illness,he died at 4:30 p.m. on December 28,1938,at his residence at 10 Park Row,Wheeling,in Ohio County's Triadelphia district. [1] [3] At the time of his death,Riley suffered from diabetes mellitus,chronic nephritis,chronic myocarditis,and dementia. [1] He was interred at Wheeling's Mount Calvary Cemetery on December 31,1938. [1] One of his sons,James B. Riley,served for over 20 years as a Justice of the Supreme Court of Appeals of West Virginia. [40]

In his 1919 book Bench and Bar of West Virginia,West Virginia Governor George W. Atkinson described Riley as "a close student,a hard worker",and "remarkably successful in the practice of his profession". [32] Following his death in 1938,the Associated Press described Riley as the "last member of the State's 'Old Guard' Democrats who held sway in the decade before the turn of the century", [3] and stated he had "guided the destiny" of West Virginia for half a century,along with Fleming,U.S. Senator John E. Kenna,John T. McGraw,William A. Ohley,and J. W. Sinclair. [3] 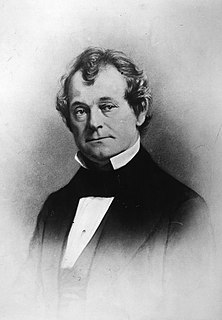 Andrew H. Hunter was a Virginia lawyer,slaveholder and politician who served in both houses of the Virginia General Assembly. He was the Commonwealth's attorney (prosecutor) for Jefferson County,Virginia,who prosecuted John Brown for the raid on Harpers Ferry. 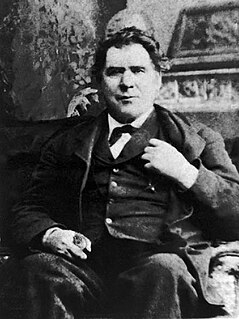 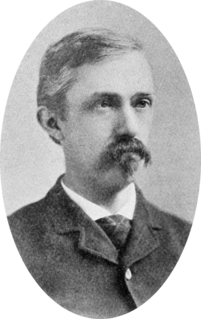 Joshua Soule Zimmerman was an American lawyer,politician,and orchardist in the U.S. state of West Virginia. In the early years of the 20th century,Zimmerman served as the Prosecuting Attorney for Hampshire County and as a Democratic member of the West Virginia House of Delegates.

James Sloan Kuykendall was an American farmer,lawyer,and Democratic politician in the U.S. state of West Virginia. Kuykendall was twice elected as a member of the West Virginia House of Delegates representing Hampshire County. Kuykendall also served three terms as the mayor of Romney and later fulfilled the position of city attorney.

Romney Classical Institute was a 19th-century coeducational collegiate preparatory school in Romney,Virginia,between 1846 and shortly after 1866. Romney had previously been served by Romney Academy,but by 1831 the school had outgrown its facilities. The Virginia General Assembly permitted the Romney Literary Society to raise funds for a new school through a lottery. On December 12,1846,the assembly established the school and empowered the society with its operation. 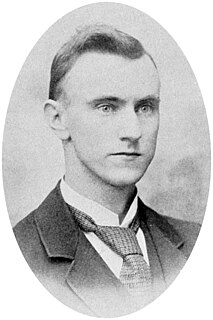 Howard Llewellyn Swisher was an American businessperson,real estate developer,orchardist,editor,writer,and historian. As a prominent businessman,he established several companies responsible for the development of businesses and real estate in Morgantown,West Virginia.

William C. Clayton was an American educator,lawyer,politician,and businessperson in the U.S. state of West Virginia. Clayton served in the West Virginia Senate representing the Eleventh Senatorial District of West Virginia from 1875 until 1879. He was twice principal of the Romney Classical Institute in Romney in 1853 and 1866.

The James Rumsey Monument,also known as Rumsey Monument Park,is a municipal park and former West Virginia state park in Shepherdstown,Jefferson County in the U.S. state of West Virginia. The park overlooks the Potomac River;it commemorates local inventor James Rumsey and his successful public demonstration of his steamboat invention on the Potomac in 1787. The monument consists of a 75-foot (23 m) column of Woodstock granite,which is capped with a globe and stands atop a tall,concrete plinth consisting of a 40-square-foot (3.7 m2) plaza. Two plaques are affixed to the monument–one at the front bears a text inscription and one at the rear bears a visual approximation of Rumsey's steamboat.

John Henry Hill was an American lawyer,educator,school administrator,and military officer. He was the second principal of the West Virginia Colored Institute from 1894 until 1898. West Virginia State considers him its second president.

Harry J. Capehart Sr. was an American lawyer,politician,and businessperson in the U.S. state of West Virginia. Capehart served as a member of the West Virginia House of Delegates,representing McDowell County for three consecutive terms,from 1919 to 1925. He also served as an assessor,city councilperson,and city attorney for Keystone,West Virginia.

Edgar Parks Rucker was an American lawyer,politician,and businessman,in the U.S. state of West Virginia. A Republican,Rucker served as the 12th attorney general of West Virginia from March 4,1897 until March 3,1901.

Arthur Glenn Froe was an American lawyer and politician. He was appointed by President Warren G. Harding as the Recorder of Deeds for the District of Columbia,and served in this position from 1922 to 1930 during the presidential administrations of Harding,Calvin Coolidge,and Herbert Hoover.

Armistead Abraham "Cousin Abe" Lilly was an American lawyer,politician,and businessperson in the U.S. state of West Virginia. A Republican,Lilly served as the 16th Attorney General of West Virginia from March 4,1913,until March 3,1917.