Thomas S. Schmidt is professor of Ancient Greek at the Institut des Études Anciennes of the Université Laval (Quebec city). His contributions to his field of study include the following:

Université Laval is a French-language, public research university in Quebec City, Quebec, Canada. The University was founded by royal charter issued by Queen Victoria in 1852, with roots in the founding of the Séminaire de Québec in 1663 by François de Montmorency-Laval, making it the oldest centre of higher education in Canada and the first North American institution to offer higher education in French. The university, whose campus was erected from the 1950s onward in the suburban borough of Sainte-Foy–Sillery–Cap-Rouge, is ranked among the top 10 Canadian universities in terms of research funding and holds 4 Canada Excellence Research Chairs. 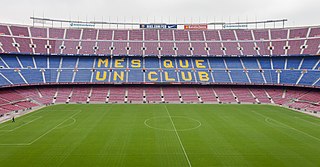 Camp Nou is the home stadium of FC Barcelona since its completion in 1957.

Anne Hébert,, was a French Canadian author and poet. She won Canada's top literary honor, the Governor General's Award, three times, twice for fiction and once for poetry.

Étienne Gilson was a French philosopher and historian of philosophy. A scholar of medieval philosophy, he originally specialised in the thought of Descartes, yet also philosophized in the tradition of Thomas Aquinas, although he did not consider himself a Neo-Thomist philosopher. In 1946 he attained the distinction of being elected an "Immortal" (member) of the Académie française. He was nominated for the Nobel Prize in Literature.

Armand Frappier, was a physician, microbiologist, and expert on tuberculosis from Quebec, Canada.

Lothaire Bluteau is a Canadian actor. He was born in Montreal, Quebec and performs in both French and English. Lothaire Bluteau has worked in theatre, film and television throughout Canada and internationally. He abandoned medicine for the theatre and was first noticed for his performance as a mentally challenged youth in Yves Simoneau’s In the Shadow of the Wind . After receiving great acclaim for the lead in the stage version of Being at Home with Claude, he won a best actor Genie Award for his performance in Denys Arcand's Oscar-nominated Jésus de Montréal. He has since appeared in Black Robe and Robert Lepage's Le Confessionnal, and his international credits include Orlando (1992) and I Shot Andy Warhol (1996).

Jerzy Linderski is a Polish contemporary scholar of ancient history and Roman religion and law. 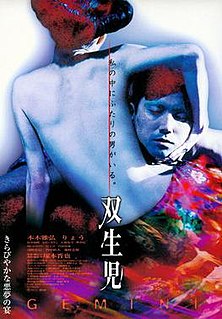 Gemini is a 1999 horror film by Shinya Tsukamoto, loosely based on an Edogawa Ranpo story, which pursues his theme of the brutally physical and animalistic side of human beings rearing its ugly head underneath a civilized veneer, present in previous films like Tetsuo: The Iron Man (1989) and Tokyo Fist (1995), in what is a new territory for Tsukamoto—a story set in the late Meiji era (1868–1912) with no stop-motion photography and no industrial setting.

Gabriel Arcand is a Canadian actor. He is the brother of film director Denys Arcand.

Plaça d'Espanya is one of Barcelona's most important squares, built on the occasion of the 1929 International Exhibition, held at the foot of Montjuïc, in the Sants-Montjuïc district. 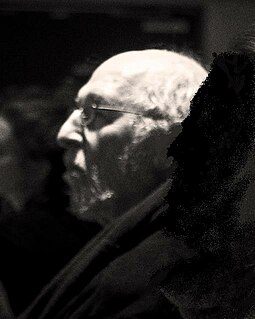 Paleontology or palaeontology is the study of prehistoric life forms on Earth through the examination of plant and animal fossils. This includes the study of body fossils, tracks (ichnites), burrows, cast-off parts, fossilised feces (coprolites), palynomorphs and chemical residues. Because humans have encountered fossils for millennia, paleontology has a long history both before and after becoming formalized as a science. This article records significant discoveries and events related to paleontology that occurred or were published in the year 1836.

Jules René Bourguignat was a French malacologist, a scientist who studied mollusks. He served as secretary-general of the Société malacologique de France. During his lifetime, he traveled widely, visiting, for example, Lake Tanganyika and North Africa. He reportedly defined 112 new genera and around 2540 new species of mollusks.

The Yahad Ostracon is a controversial ostracon that was found at the ruins of Qumran in 1996. The editors who published the text claimed that it contained the Hebrew word yahad (יחד). This word is also used in a number of the Dead Sea Scrolls, where it has usually been translated as "community", and is generally taken to be a self-reference to the group responsible for the scrolls in which it appears. The presence of this unusual term in both the scrolls and on the ostracon would connect the scrolls to the settlement at Qumran. 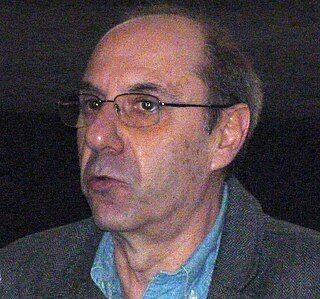 Alain Berbérian was a French film director and writer of Armenian descent.

Henri Basset was a 20th-century French historian, orientalist and linguist and a Berberologist.