Smith came to Lawrence from Ohio University, where he had spent two years as provost, assuming the president’s office on July 1, 1969. He presided over the college until his retirement on August 31, 1979. [1]

He led the college during one of the more difficult periods in its recent history. Student unrest over Vietnam and civil rights activism, as well as pressure from the student body for more of a voice in matters of academic and student life required delicate but decisive leadership. When Smith arrived on campus in 1969, his first faculty meeting was disrupted by students protesting U.S. involvement in the Vietnam War.

During the 1970s, the college, along with American higher education in general, faced an extended period of fiscal austerity, necessitating difficult decisions and the retrenchment of faculty, staff, and administration.

Among the milestones of his presidency were the completion of a major capital campaign; the opening of the Seeley G. Mudd Library in 1975; the strengthening of the university endowment; an extensive administrative reorganization involving academic affairs, admissions, development and student life; improvements in the curriculum and the renovations of Sage and Ormsby Halls.

"Tom was a quiet and unassuming man, yet forceful and straightforward in his dealings and interactions with others," recalled Richard Warch, who succeeded Smith as Lawrence president in 1979. "I had the privilege of serving with him for the last two years of his tenure (as vice president of academic affairs) and counted him a friend and mentor and admired him as a man of principle and honor."

In 1972, President Richard Nixon appointed Smith to the President's Committee on the National Medal of Science, the selection committee for the prestigious awards for distinguished contributions in physical, biological, mathematics, or engineering sciences. The following year, Wisconsin Governor Patrick Lucey appointed Smith chairman of the newly created State Ethics Board, a position he still held when he left Lawrence.

After leaving Lawrence, Smith served as executive director of the Lakeshore Consortium in Support of the Arts, an organization promoting increased awareness of, participation in, and contributions to an enhanced environment for arts activities in the Fox River Valley. He maintained a commitment to liberal education in retirement remaining active with the Waupaca-based Winchester Academy, encouraging it to foster its historic focus on the liberal arts and sciences and music.

The Harvard Faculty of Arts and Sciences (FAS) is the largest of the twelve faculties that constitute Harvard University.

Richard Warch (1939–2013) was an American professor, ordained minister and academic. He served as the 14th president of Lawrence University.

Jamshed Bharucha is a cognitive neuroscientist who has served in prominent leadership roles in higher education, and is currently the inaugural Vice Chancellor of SRM University, Andhra Pradesh. He has served as Distinguished Fellow and Research Professor at Dartmouth College, where his research and teaching were focused on education data science. He is President Emeritus of Cooper Union, a college located in Manhattan, New York City, having served as the 12th President of Cooper Union from July 2011 through June 2015.

Daniel J. Myers is the Provost and Chief Academic Officer of American University in Washington, D.C. and a professor of Sociology. His best known research is on the urban unrest of the 1960s and the media coverage of those riots, specializing in identifying the patterns of unrest diffusion. He has written several books and articles, and is co-author of the best-selling sociological social psychology textbook, Social Psychology. 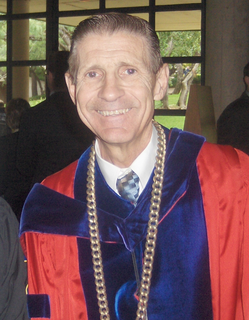 Francis M. "Frank" Lazarus, Ph.D. is a retired educator and higher education administrator. He served as the president of the University of Dallas in Irving, Texas, from 2004 until 2009, when he was honored by the board of trustees with the title president emeritus.

William Samuel Livingston was a political science professor who was the acting president of the University of Texas at Austin, a position he held from 1992 until 1993. Born in Ironton, Ohio, Livingston fought in World War II as a first lieutenant and was awarded the Bronze Star and the Purple Heart. In 1943 he obtained bachelor's and master's degrees from Ohio State University before transferring to Yale University, where he was award a PhD in 1950.

Joseph Glover is an American professor and currently serves as the Provost for the University of Florida.

Ian Gatley was the former Provost and Senior Vice President for Academic Affairs of New Jersey Institute of Technology (NJIT) in Newark, New Jersey.
He is also a Distinguished Professor of Physics in the department of Physics at the College of Science and Liberal Arts in NJIT.
He is a prolific scholar well known in Astronomy and Imaging Science. 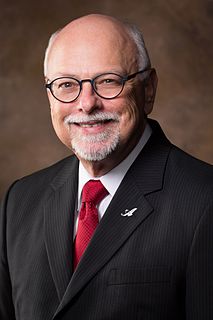 Joseph E. Steinmetz is the sixth chancellor of the University of Arkansas. He succeeded G. David Gearhart on Jan. 1, 2016, following successful academic and administrative positions at Stanford University, Indiana University Bloomington, University of Kansas, and most recently as executive vice president and provost of Ohio State University.

Thyrsa Anne Frazier Svager was an American academic who was one of the first African-American woman to gain a PhD in mathematics. Born in Ohio, she graduated from high school at the age of 16, going to Antioch College in Ohio and then doing her postgraduate degrees at Ohio State University. Frazier Svager was the head of the Department of Mathematics at Central State University (CSU) in Ohio for decades, ending her academic career as provost and dean for academic affairs. She and her husband, physics professor Aleksandar Svager, invested one of their salaries during their careers to build a legacy for scholarships. After her death, the Thyrsa Frazier Svager Fund was established to provide scholarships for African-American women majoring in mathematics.

Gregory J. Vincent is the Executive Director of the Civil Rights and Education Initiative and Professor at the University of Kentucky. He served as the forty-eighth Grand Sire Archon of Sigma Pi Phi Fraternity. He also served as the twenty-seventh President of the Hobart College and the sixteenth of William Smith College. Vincent is a national expert on civil rights, social justice and campus culture.

Joan Huber is an American sociologist and professor emeritus of sociology at Ohio State University. Huber served as the 79th president of the American Sociological Association in 1989. Huber taught at the University of Notre Dame from 1967 to 1971, eventually moving to Illinois, where she taught at the University of Illinois at Urbana/Champaign. While instructing numerous sociology courses at the University of Illinois at Urbana/Champaign, Huber served as the director of Women's Studies Program for two years (1978–1980), and then became the head of the Department of Sociology in 1979 until 1983. In 1984, Huber left Illinois for an opportunity at the Ohio State University, where she became the dean of the College of Social and Behavioral Sciences, coordinating dean of the Colleges of the Arts and Sciences, and senior vice president for academic affairs and university provost. During her time, Huber was president of Sociologists for Women in Society from 1972–1974, the Midwest Sociological Society from 1979–1980, and the American Sociological Association from 1988–1989. Being highly recognized for her excellence, in 1985 Huber was given the Jessie Bernard Award by the American Sociological Association. Not only was Huber an instructor of sociology at multiple institutions or president of different organization, she also served different editorial review boards, research committees, and counseled and directed many institutions on their sociology departments.

Jacquelyn Anderson Mattfeld is a retired musicologist and academic administrator. She served as president of Barnard College from 1976 to 1980.