Thomas Sanders (18 October 1809 – 25 March 1852) was an English cricketer with amateur status. He was associated with Cambridge University and made his first-class debut in 1828. [1]

Sanders was educated at Eton College and King's College, Cambridge. he was a fellow of King's 1831–45. During this time he was admitted to the Inner Temple and was called to the Bar in 1839. [2] 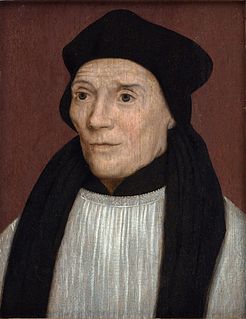 John Fisher, was an English Catholic bishop, cardinal, and theologian. Fisher was also an academic, and eventually served as Chancellor of the University of Cambridge. 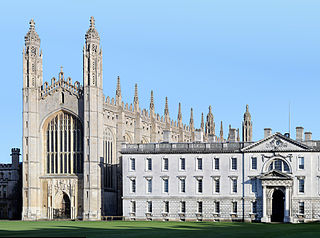 Nicholas Sanders was an English Catholic priest and polemicist.

Richard Courtenay was an English prelate and university chancellor.

Thomas Comber was an English linguist. He was the Dean of Carlisle and Master of Trinity College, Cambridge.

Memorial Hall, immediately north of Harvard Yard in Cambridge, Massachusetts, is an imposing High Victorian Gothic building honor­ing the sacrifices made by Harvard men in defense of the Union during the American Civil War‍—‌"a symbol of Boston's commitment to the Unionist cause and the abolitionist movement in America."

Sir Keith Vivian Thomas, is a Welsh historian of the early modern world based at Oxford University. He is best known as the author of Religion and the Decline of Magic and Man and the Natural World. From 1986 to 2000, he was President of Corpus Christi College, Oxford.

Terence Robert Beaumont Sanders was a British rower who competed in the 1924 Summer Olympics, a lecturer in engineering at Cambridge, an army officer engaged in countering the V2 threat, civil servant and High Sheriff of Surrey.

Thomas Chapman (1717–1760) was an English churchman and academic, Master of Magdalene College, Cambridge from 1746.

Francis Barnes was an English philosopher and a Knightbridge Professor of Philosophy.