Sanderson was born at Gunton Park, about six miles north of Aylsham, Norfolk, the second son of Richard Sanderson, Member of Parliament for Colchester from 1832 to 1847, and the Honourable Charlotte Matilda Sanderson Manners-Sutton, elder daughter of Charles Manners-Sutton, Speaker of the House of Commons from 1817 to 1835. He was educated at Eton until he was forced to leave the school in 1857 due to the poor state of his family's finances, caused by the death of his father in October of that year, and his father's business in East India failing.

Sanderson entered the Foreign Office as a junior clerk in 1859 and was not to leave the Foreign Office until his retirement in 1906. In December 1863 Sanderson accompanied Lord Wodehouse to Berlin and Copenhagen on his special mission during the Schleswig-Holstein crisis. Early in his career he crossed paths with Lord Stanley, later 15th Earl of Derby. Sanderson became Stanley's private secretary in July 1866 and left an impression on Stanley, who described him as 'the best of the juniors' [2] on exit from office, after Benjamin Disraeli's first government fell in the 1868 December General Election. In 1871 he went to Geneva during the arbitration between the United Kingdom and the USA on the Alabama claims. He was later private secretary to Foreign Secretary Lord Granville between 1880 and 1885, Senior Clerk at the Foreign Office between 1885 and 1889, Assistant Permanent Under-Secretary of State for Foreign Affairs between 1889 and 1894 and Permanent Under-Secretary of State for Foreign Affairs between 1894 and 1906. On 20 December 1905 he was raised to the peerage as Baron Sanderson, of Armthorpe in the County of York. [3]

Sanderson's nickname was 'Lamps' due to his strong spectacles. He died unmarried at Wimpole Street, London, in March 1923, aged 82, when the barony became extinct. 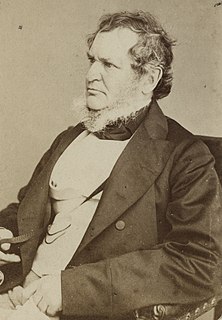 Edward George Geoffrey Smith-Stanley, 14th Earl of Derby was a British statesman, three-time Prime Minister of the United Kingdom and, to date, the longest-serving leader of the Conservative Party. He was known before 1834 as Edward Stanley, and from 1834 to 1851 as Lord Stanley. He is one of only four British prime ministers to have three or more separate periods in office. However, his ministries each lasted less than two years and totalled three years and 280 days.

Robert Arthur Talbot Gascoyne-Cecil, 3rd Marquess of Salisbury, was a British statesman. He was styled Lord Robert Cecil before the death of his elder brother in 1865, Viscount Cranborne from June 1865 until his father died in April 1868, and then the Marquess of Salisbury. He served as prime minister three times for a total of over thirteen years. He acted as his own foreign minister. He avoided alignments or alliances, maintaining the policy of "splendid isolation." 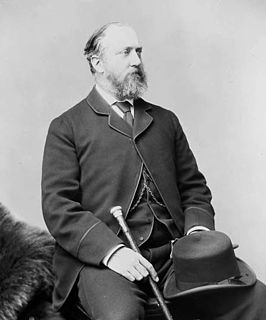 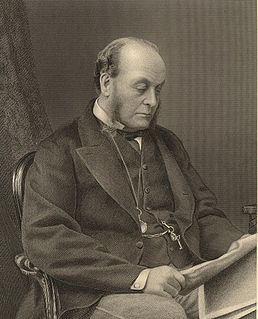 Earl Cadogan is a title that has been created twice in the Peerage of Great Britain for the Cadogan family. The second creation, in 1800, was for Charles Cadogan, 3rd Baron Cadogan.

Robert Bourke, 1st Baron Connemara, was a British Conservative politician and colonial administrator. He served as Under-Secretary of State for Foreign Affairs between 1874 and 1880 and 1885 and 1886, and was Governor of Madras between 1886 and 1890.

Julian Pauncefote, 1st Baron Pauncefote, known as Sir Julian Pauncefote between 1874 and 1899, was a British barrister, judge and diplomat. He was Permanent Under-Secretary of State for Foreign Affairs between 1882 and 1889 when he was appointed Envoy Extraordinary and Minister Plenipotentiary to the United States, an office that was upgraded to that of Ambassador to the United States in 1893. Elevated to the peerage as Baron Pauncefote in 1899, he died in office in 1902.

Montagu William Lowry-Corry, 1st Baron Rowton,, also known as "Monty", was a British philanthropist and public servant, best known for serving as Benjamin Disraeli's private secretary from 1866 until the latter's death in 1881. 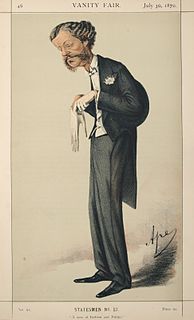 Lord Henry George Charles Gordon-Lennox PC, known as Lord Henry Lennox, was a British Conservative politician who sat in the House of Commons from 1846 to 1885 and was a close friend of Benjamin Disraeli. 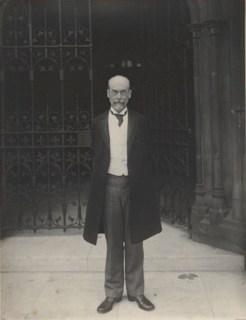 Edmond George Petty-Fitzmaurice, 1st Baron Fitzmaurice, PC, styled Lord Edmond FitzMaurice from 1863 to 1906, was a British Liberal politician. He served as Under-Secretary of State for Foreign Affairs from 1883 to 1885 and again from 1905 to 1908, when he entered the cabinet as Chancellor of the Duchy of Lancaster under H. H. Asquith. However, illness forced him to resign the following year.

This is a list of Permanent Under-Secretaries in the British Foreign and Commonwealth Office since 1790. 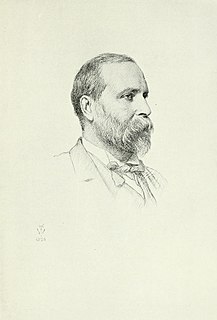 Sir Robert Henry Meade was a British civil servant and the Head of the Colonial Office between 1892 and 1897.

John Neville Manners played cricket for Eton College in Fowler's match in 1910, and died in the early weeks of the First World War on the retreat from Mons. He was immortalised in poem LIV of The Muse in Arms by William Grenfell entitled "To John".