Thomas Savage (c. 1552–1611) of Rufford, Lancashire, was a member of the Worshipful Company of Goldsmiths and one of the ten seacoal-meters in London. Together with William Leveson, he was one of two trustees used by the original shareholders of the Globe Theatre in the allocation of their shares in 1599. He was an associate of the actor and editor of the First Folio, John Heminges, and of John Jackson, both of whom were Shakespeare's trustees in the purchase of the Blackfriars Gatehouse. Savage amassed a considerable fortune, at the time of his death owning five houses in London and an inn called the George.

Thomas Savage, born about 1552 in Rufford, Lancashire, [1] was the son of Jeffry or Geoffrey Savage and Jenett or Janet Hesketh, who according to the parish register were married in the church at Croston on 9 August 1551. [2] Savage may have had a younger brother, Peter Savage, and had at least one sister, [3] as well as a female cousin, the widow of Thomas Hesketh of Rufford. [1]

At some time Savage moved to London, where he lived from about 1580 until his death in 1611 in the parish of St Albans Wood Street. [1] At an unknown date he gained admission to the Worshipful Company of Goldsmiths. The Company records are missing for the date of his admission; however surviving Company records indicate that he took on nine apprentices from the 1580s until his death, and that his son, Richard, was taken on as an apprentice in 1601. [2] According to Hotson, however, he 'no doubt gained most of his income from his office as one of the ten seacoal-meters of London' [4] officials appointed to measure coal brought into the port of London by sea. [5] According to Hotson, he was a 'man of substance', [1] and Honigmann notes that, 'starting with nothing', he 'amassed a very considerable fortune'. [6] At the time of his death Savage owned at least five houses in the City of London, one of which was occupied by the actor and editor of the First Folio, John Heminges (bap. 1566, d.1630), also one of London's seacoal-meters, [5] from whom Savage had purchased it. [1] Another of the houses owned by Savage was in the parish of St Olave Silver Street; [7] Hotson notes that William Shakespeare lodged for a time in Silver Street at the house of the London tire-maker (head-dress-maker) [8] Christopher Mountjoy. [1] After Savage's death, his son, Richard, sold the latter house to John Heminges. [1] Savage also owned an inn called the George in the parish of St Sepulchre, London. [9]

In 1599 Savage, together with William Leveson, was one of two trustees used by William Kempe, Thomas Pope (d.1603), Augustine Phillips (d.1605), John Heminges and William Shakespeare to allocate shareholdings in the Globe Theatre.

Savage was a friend of John Jackson (c.1574–1625) gentleman, of Kingston upon Hull and London, whom Heminges had taken as his deputy in the office of seacoal-meter soon after December 1608. [10] [11] Both Jackson and Heminges were later Shakespeare's trustees in the purchase of the Blackfriars Gatehouse in March 1613. [12] In his will Savage appointed his 'very loving friend, John Jackson', as overseer. [13]

Savage made his last will on 3 October 1611, [1] leaving, among other bequests, £10 to his mother, Janet, [9] a silver spout pot and £8 for a dinner to his fellow members of the Goldsmiths' Company, and forty shillings to the poor of his birthplace, Rufford, in the parish of Croston. [4] According to Honigmann, the opening lines of Savage's will suggest that he held strong religious convictions, and his bequests to the parson and churchwardens of his parish of St Albans, Wood Street were 'unusually generous'. [9] The will was proved 26 October 1611. [14]

Savage married two wives and had five children. [15] One of his wives, Alice, had four children by her own two previous marriages, as revealed in a bill of complaint dated 10 September 1605. [9] According to Honigmann, the maiden name of one of Savage's wives may have been Wotton, as in his will he mentions 'my mother-in-law, Mrs Wootton' as well as a 'Mr John Wotton, gentleman', now resident in one of his houses in London. [9]

William Shakespeare was an English playwright, poet, and actor, widely regarded as the greatest writer in the English language and the world's greatest dramatist. He is often called England's national poet and the "Bard of Avon". His extant works, including collaborations, consist of some 39 plays, 154 sonnets, two long narrative poems, and a few other verses, some of uncertain authorship. His plays have been translated into every major living language and are performed more often than those of any other playwright. They also continue to be studied and reinterpreted.

Henry Condell was an actor in the King's Men, the playing company for which William Shakespeare wrote. With John Heminges, he was instrumental in preparing and editing the First Folio, the collected plays of Shakespeare, published in 1623. 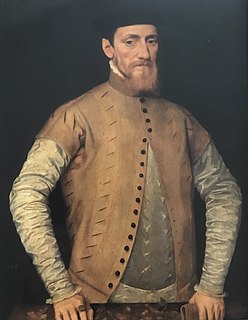 Alexander Cooke was an actor in the King's Men and the Lord Chamberlain's Men, the acting companies of William Shakespeare, John Heminges and Richard Burbage.

The Seven Deadly Sins was a two-part play written c. 1585, attributed to Richard Tarlton, and most likely premiered by his company, Queen Elizabeth's Men. The play drew upon the medieval tradition of the morality play; though it was very popular in its time, no copy of either part has survived.

Andrew Cane — also Kayne, Kene, Keine, and other variants — was a comic actor in late Jacobean and Caroline era London. In his own generation he was a leading comedian and dancer, and one of the famous and popular performers of his time.

William Heminges, also Hemminges, Heminge, and other variants, was a playwright and theatrical figure of the Caroline period. He was the ninth child and third son of John Heminges, the actor and colleague of William Shakespeare, and his wife Rebecca.

Thomas Savage may refer to:

Joan Leche, benefactress, was the wife successively of Thomas Bodley, and of Thomas Bradbury, Lord Mayor of London in 1509. She founded a chantry in London, and a grammar school in Saffron Walden, Essex. Her great-grandson, Sir John Leveson (1555–1615), was instrumental in putting down the Essex rebellion of 8 February 1601, and her great-grandson William Leveson (d.1621) acted as trustee for the original shareholders of the Globe Theatre.

Richard Carmarden was an English merchant, member of the Merchant Taylors Company, and Surveyor of the Customs for London. He paid for the printing of the Bible in English in Rouen in 1566, and in 1570 wrote A Caveat for the Quene.

William Shakespeare's last will and testament was signed on 25 March 1616, just under a month before his death. The document has been studied for details of his personal life, for his opinions, and for his attitudes towards his two daughters, Susanna and Judith, and their respective husbands, John Hall and Thomas Quiney. The best-known passage of the will is the bequest to the wife of his "second best bed". The significance of this phrase is not certain.

The Nevillean theory of Shakespeare authorship contends that the English parliamentarian and diplomat Sir Henry Neville, wrote the plays and poems traditionally attributed to William Shakespeare.