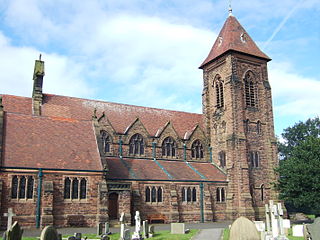 Scarisbrick is a village and civil parish in West Lancashire, England. The A570, the main road between Ormskirk and Southport, runs through Scarisbrick, and much of the village lies along it. As a result, it does not have a traditional village centre, though the junction with the A5147 is close to the geographic centre. 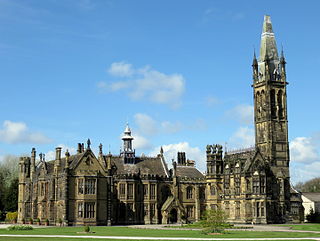 Scarisbrick Hall is a country house situated just to the south-east of the village of Scarisbrick in Lancashire, England.

James Kitson, 1st Baron Airedale, PC, DSc, was an industrialist, locomotive builder, Liberal Party politician and a Member of Parliament for the Holme Valley. He was known as Sir James Kitson from 1886, until he was elevated to the peerage in 1907. Lord Airedale was a prominent Unitarian in Leeds, Yorkshire.

The Naylor-Leyland Baronetcy, of Hyde Park House, Albert Gate, in the County of London, is a title in the Baronetage of the United Kingdom. It was created on 31 August 1895 for Herbert Naylor-Leyland, Conservative Member of Parliament for Colchester from 1892 to 1895 and Liberal Member of Parliament for Southport from 1898 to 1899. The second Baronet served as Sheriff of Denbighshire in 1921. 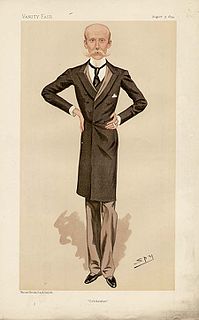 Sir Peter Hesketh-Fleetwood, 1st Baronet, was an English landowner, developer and Member of Parliament, who founded the town of Fleetwood, in Lancashire, England. Born Peter Hesketh, he changed his name by Royal assent to Hesketh-Fleetwood, incorporating the name of his ancestors, and was later created Baronet Fleetwood. Predeceased by an older brother, he inherited estates in west Lancashire in 1824. Inspired by the transport developments of the early 19th century, he decided to bring the railway to the Lancashire coast and develop a holiday resort and port. He hired architect Decimus Burton to design his new town, which he named Fleetwood; construction began in 1836. Hesketh-Fleetwood was instrumental in the formation of the Preston and Wyre Railway Company and with his financial support, a railway line was built between Preston and Fleetwood which opened in 1840.

The Scarisbrick Baronetcy, of Greaves Hall in the Parish of North Meols in the County Palatine of Lancaster, was a title in the Baronetage of the United Kingdom. It was created on 17 July 1909 for the Liberal politician Thomas Scarisbrick. He was the son of Sir Charles Scarisbrick, Mayor of Southport. The title became extinct on the death of the second Baronet in 1955.

Sir Alexander Hargreaves Brown, 1st Baronet was an English Liberal Party, and later Liberal Unionist, politician who sat in the House of Commons from 1868 to 1906.

Sir Thomas Willans Nussey, 1st BaronetDL JP was an English barrister and Liberal Party politician. He was the Member of Parliament (MP) for Pontefract from 1893 to 1910. 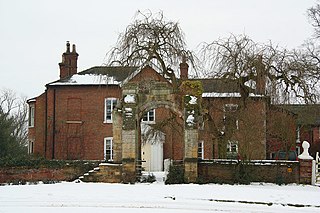 Weston Cracroft Amcotts was an English Liberal Party politician who sat in the House of Commons from 1868 to 1874.

Southport Rugby Football Club is a rugby union club based in Southport, Merseyside, now playing their home matches at Waterloo Road in Hillside. The club participates in North 2 West.