Thomas Albert Sebeok (Hungarian : Sebők Tamás, Hungarian:  [ˈʃɛbøːk ˈtɒmaːʃ] ; 1920–2001) was a Hungarian-born American polymath, [1] semiotician, and linguist. [2] [3] [4] [5] [6] As one of the founders of the biosemiotics field, he studied non-human and cross-species signaling and communication. [7] He is also known for his work in the development of long-time nuclear waste warning messages, in which he worked with the Human Interference Task Force (established 1981) to create methods for keeping the inhabitants of Earth away from buried nuclear waste that will still be hazardous 10,000 or more years in the future. [8]

Thomas Sebeok was born on November 9, 1920, in Budapest, Hungary. He attended secondary school at the famous Budapest-Fasori Evangélikus Gimnázium, which educated notables such as Edward Teller, John von Neumann, and Eugene Wigner. After a brief stint at Cambridge University (Magdalene College) in England, he moved to the United States at the age of 17 and became a naturalized citizen in 1944. [9] Sebeok earned a bachelor's degree in 1941 at the University of Chicago. He earned a master's degree in anthropological linguistics, under the external guidance of Roman Jakobson, at Princeton University in 1943 and, in 1945, a doctorate at Princeton University; his dissertation was titled Finnish and Hungarian case systems: their form and function. [10]

In 1943, Sebeok started work at Indiana University in Bloomington, assisting the Amerindianist Carl Voegelin in managing the country's largest Army Specialized Training Program in foreign languages. He then created the university's department of Uralic and Altaic Studies, covering the languages of Eastern Europe, Russia and Asia. He was also the chair of the university's Research Center for Language and Semiotic Studies.

As a professor at Indiana University, Sebeok studied both human and non-human systems of signaling and communication, as well as the philosophy of mind. [11] He was among the founders of biosemiotics, and coined the term "zoosemiotics" in 1963 to describe the development of signals and signs by non-human animal species. [12] He also continued his work as a linguist, publishing several articles and books analyzing aspects of the Mari language (referring to it by the name "Cheremis"). His transdisciplinary work and professional collaborations spanned the fields of anthropology, biology, folklore studies, linguistics, psychology, and semiotics. [11]

Sebeok was the editor-in-chief of the journal Semiotica , the leading periodical in the field, from its establishing in 1969 until 2001. [13] He was also the editor of several book series and encyclopedias, including Approaches to Semiotics (over 100 volumes), Current Trends in Linguistics, and the Encyclopedic Dictionary of Semiotics. [11]

In the early 1980s, Sebeok composed a report for the US Office of Nuclear Waste Management titled Communication Measures To Bridge Ten Millennia, [14] discussing solutions to the problem of nuclear semiotics, a system of signs aimed at warning future civilizations from entering geographic areas contaminated by nuclear waste. [15] The report proposed a "folkloric relay system" and the establishment of an "atomic priesthood" of physicists, anthropologists, and semioticians to create and preserve a common cultural narrative of the hazardous nature of nuclear waste sites. [16]

In addition to his academic work, Sebeok organized hundreds of international conferences and institutes, held leadership roles in organizations such as the Linguistic Society of America, International Association for Semiotic Studies, Committee for Skeptical Inquiry, and the Semiotic Society of America, and supported the creation of linguistic and semiotics teaching programs and scholarly associations throughout the world. [1]

Sebeok's personal library on semiotics, comprising more than 4,000 volumes of books and 700 journals, is preserved at the Department of Semiotics at the University of Tartu in Estonia. [17] His correspondence and research files are held by the Indiana University Archives. [10]

Sebeok married Mary Eleanor Lawton (1912–2005) in 1947. They had one child, Veronica C. Wald, and later divorced. Sebeok married Donna Jean Umiker (born 1946, now D. Jean Umiker-Sebeok), a fellow semiotic scholar and his frequent collaborator and co-author, in 1973, and they had two children, Jessica A. Sebeok and Erica L. Sebeok. Sebeok retired from Indiana University in 1991, but he contributed to the field of semiotics until his death in 2001. [10]

Semiotics is the systematic study of sign processes (semiosis) and meaning making. Semiosis is any activity, conduct, or process that involves signs, where a sign is defined as anything that communicates something, usually called a meaning, to the sign's interpreter. The meaning can be intentional such as a word uttered with a specific meaning, or unintentional, such as a symptom being a sign of a particular medical condition. Signs can also communicate feelings and may communicate internally or through any of the senses: visual, auditory, tactile, olfactory, or gustatory (taste). Contemporary semiotics is a branch of science that studies meaning-making and various types of knowledge.

Juri Lotman was a prominent Russian-Estonian literary scholar, semiotician, and historian of Russian culture, who worked at the University of Tartu. He was elected a member of the British Academy (1977), Norwegian Academy of Science and Letters (1987), Royal Swedish Academy of Sciences (1989) and Estonian Academy of Sciences (1990). He was a founder of the Tartu–Moscow Semiotic School. The number of his printed works exceeds 800 titles. His archive which includes his correspondence with a number of Russian and Western intellectuals, is immense.

Biosemiotics is a field of semiotics and biology that studies the prelinguistic meaning-making, biological interpretation processes, production of signs and codes and communication processes in the biological realm. 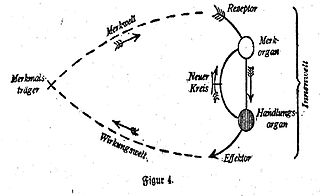 In the semiotic theories of Jakob von Uexküll and Thomas A. Sebeok, umwelt is the "biological foundations that lie at the very epicenter of the study of both communication and signification in the human [and non-human] animal". The term is usually translated as "self-centered world". Uexküll theorised that organisms can have different umwelten, even though they share the same environment. The term umwelt, together with companion terms Umgebung and Innenwelt, have special relevance for cognitive philosophers, roboticists and cyberneticians because they offer a potential solution to the conundrum of the infinite regress of the Cartesian Theater.

The semiosphere is an idea in biosemiotic theory proposing that, contrary to ideas of nature determining sense and experience, the phenomenal world is a creative and logical structure of processes of semiosis where signs operate together to produce sense and experience.

Monastic sign languages have been used in Europe from at least the 10th century by Christian monks, and some, such as Cistercian and Trappist sign, are still in use today—not only in Europe, but also in Japan, China and the USA. Unlike deaf sign languages, they are better understood as forms of symbolic gestural communication rather than languages, and some writers have preferred to describe them as sign lexicons.

John Deely was an American philosopher and semiotician. He was a professor of philosophy at Saint Vincent College and Seminary in Latrobe, Pennsylvania. Prior to this, he held the Rudman Chair of Graduate Philosophy at the Center for Thomistic Studies, located at the University of St. Thomas (Houston).

Giorgio Prodi was an Italian medical scientist, oncologist and semiotician.

International Association for Semiotic Studies is the major world organisation of semioticians, established in 1969.

The Semiotic Society of America is an interdisciplinary professional association serving scholars from many disciplines with common interests in semiotics, the study of signs and sign-systems. It was founded in 1975 and includes members from the United States and Canada. Its official journal is The American Journal of Semiotics. The Society also publishes the proceedings of its annual conferences. Memberships in the society and publication of the journal are managed by the Philosophy Documentation Center. 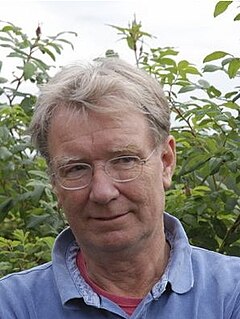 Jesper Hoffmeyer was a professor at the University of Copenhagen Institute of Biology, and a leading figure in the emerging field of biosemiotics. He was the President of the International Society for Biosemiotic Studies (ISBS) from 2005 to 2015, co-editor of the journal Biosemiotics and the Springer Book series in Biosemiotics. He authored the books Biosemiotics: An Examination into the Signs of Life and the Life of Signs and Signs of Meaning in the Universe and edited A Legacy for Living Systems: Gregory Bateson as Precursor to Biosemiotics.

Augusto Ponzio is an Italian semiologist and philosopher.

The following outline is provided as an overview of and topical guide to semiotics:

Irmengard Rauch is a linguist and semiotician.

Semiotics of culture is a research field within semiotics that attempts to define culture from semiotic perspective and as a type of human symbolic activity, creation of signs and a way of giving meaning to everything around. Therefore, here culture is understood as a system of symbols or meaningful signs. Because the main sign system is the linguistic system, the field is usually referred to as semiotics of culture and language. Under this field of study symbols are analyzed and categorized in certain class within the hierarchal system. With postmodernity, metanarratives are no longer as pervasive and thus categorizing these symbols in this postmodern age is more difficult and rather critical. 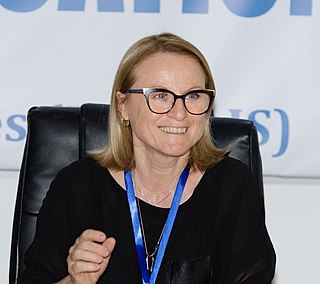 Susan Petrilli is an Italian semiotician, professor of philosophy and theory of languages at the University of Bari, Aldo Moro, Italy, and the seventh Thomas A. Sebeok Fellow of the Semiotic Society of America. She is also International Visiting Research Fellow at the School of Psychology, the University of Adelaide, South Australia.