Thomas Selby Egan (25 December 1814 – 11 May 1893) was a coxswain, a rowing coach, and a German scholar. As a coxswain for Cambridge University, he coxed the first Cambridge boat to win The Boat Race.

Egan was born in London, the son of John Egan. He was admitted to Gonville and Caius College, Cambridge on 29 June 1833. In his college days at Cambridge he was cox for the winning Cambridge boat in the Boat Races in 1836, 1839 and 1840 and was well known as an "aquatic coach". [1] In 1841 and 1842 he coxed the Cambridge Subscription Rooms eight which won the Grand Challenge Cup at Henley Royal Regatta. [2] Egan was an umpire at Henley Regatta for 12 years [3] and was an editor of Bell's Life in London for many years. [1]

Egan criticised the use of watermen as coaches, advocating the longer and smoother stroke of amateurs rather than the waterman's choppy stroke. [4] When Cambridge insisted on using a waterman as coach in the 1852 race, Egan in protest trained the Oxford crew which went on to win. [5] He coached the Cambridge crew in the 1854 race, both crews in the 1856 race and the Cambridge crew in the 1858 race. In 1865 a lifeboat was presented to the lifeboat station at Tramore, Southern Ireland, called the Thomas Egan. [3]

Egan was a German scholar and translated Schiller's Don Carlos, Infant of Spain , Heine's Börne , and other poems. [1]

Egan died at 42, Marine Terrace, Margate, Kent, the home of Mrs. Harriette Mary Powell, with whom he lodged for a number of years, at the age of 78, and was buried in Margate Cemetery. [6]

Rowing is the sport of racing boats using oars. It differs from paddling sports in that rowing oars are attached to the boat using oarlocks, while paddles are not connected to the boat. Rowing is divided into two disciplines: sculling and sweep rowing. In sculling, each rower holds two oars—one in each hand, while in sweep rowing each rower holds one oar with both hands. There are several boat classes in which athletes may compete, ranging from single sculls, occupied by one person, to shells with eight rowers and a coxswain, called eights. There are a wide variety of course types and formats of racing, but most elite and championship level racing is conducted on calm water courses 2 kilometres (1.2 mi) long with several lanes marked using buoys.

Leander Club, founded in 1818, is one of the oldest rowing clubs in the world, and the oldest non-academic club. It is based in Remenham in Berkshire, England and adjoins Henley-on-Thames. Only three other surviving clubs were founded prior to Leander: Brasenose College Boat Club and Jesus College Boat Club and Westminster School Boat Club, founded in 1813. 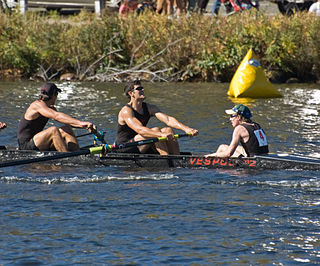 The Stewards' Challenge Cup is a rowing event for men's coxless fours at the annual Henley Royal Regatta on the River Thames at Henley-on-Thames in England. It is open to male crews from all eligible rowing clubs. Two or more clubs may combine to make an entry.

Brasenose College Boat Club (BNCBC) is the rowing club of Brasenose College, Oxford, in Oxford, England. It is one of the oldest boat clubs in the world, having beaten Jesus College Boat Club in the first modern rowing race, held at Oxford in 1815. Although rowing at schools such as Eton and Westminster School Boat Club predates this, the 1815 contest is the first recorded race between rowing clubs anywhere in the world.

Walter Bradford Woodgate was a British barrister and oarsman who won the Wingfield Sculls three times, and various events at Henley Royal Regatta including the Silver Goblets five times and the Diamond Challenge Sculls once. He founded Vincent's Club as an undergraduate at Brasenose College, Oxford, in 1863, and in 1868 created the first coxless four by persuading Brasenose's cox to jump overboard after the start of Henley's Stewards' Challenge Cup.

David Michael Jennens was an English rower who competed for Great Britain in the 1952 Summer Olympics. He was a medical doctor.

The 3rd Boat Race took place on the River Thames on 3 April 1839. It was the second of the University Boat Races to be held on the River Thames, this time between Westminster and Putney. Cambridge had competed against Leander Club in 1837 and 1838; it had been three years since Oxford and Cambridge raced against one another. Representatives of both universities and an independent referee oversaw the proceedings. Cambridge won the race by 35 lengths, as of 2019 the largest winning margin in the history of the event.

The 5th Boat Race took place on the River Thames on 14 April 1841. It was the fourth of the University Boat Races, a side-by-side rowing competition between the University of Oxford and the University of Cambridge, to be contested in London. The race was held between Westminster Bridge and Putney Bridge and was won by Cambridge, whose crew featured two pairs of brothers rowing, who defeated Oxford by a distance of 22 lengths in a time of 32 minutes and 30 seconds. The victory took the overall record in the event to 4–1 in Cambridge's favour.

The 127th Boat Race took place on 4 April 1981. Held annually, the Boat Race is a side-by-side rowing race between crews from the Universities of Oxford and Cambridge along the River Thames. Umpired by former Oxford rower Ronnie Howard, it was won by Oxford who passed the finishing post eight lengths ahead of Cambridge, their largest margin of victory since 1898. The race saw Oxford coxed by Sue Brown, the first female cox in the history of the event.

The 11th Boat Race took place on the River Thames on 3 April 1852. Typically held annually, the event is a side-by-side rowing race between crews from the Universities of Oxford and Cambridge. Former Cambridge cox Thomas Selby Egan coached Oxford, the first time that either crew had been trained by a member of the opposing university. The race was won by Oxford, their first Boat Race victory at Easter, who triumphed over Cambridge by nine lengths.

The 12th Boat Race took place on the River Thames on 8 April 1854. Typically held annually, the event is a side-by-side rowing race between crews from the Universities of Oxford and Cambridge. The race was won by Oxford who triumphed over Cambridge by seven lengths.

The 15th Boat Race took place on the River Thames on 27 March 1858. Typically held annually, the event is a side-by-side rowing race between crews from the Universities of Oxford and Cambridge. The 1858 race, disrupted by poor rowing and a collision with a barge, was won by Cambridge, who defeated Oxford by 7+1⁄2 lengths in a time of 21 minutes 23 seconds.

The 25th Boat Race between crews from the University of Oxford and the University of Cambridge took place on the River Thames on 4 April 1868. Oxford won by six lengths in a time of 20 minutes and 56 seconds, taking the overall record to 15–10 in their favour. Oxford cox Charles Tottenham became the first person in the history of the event to win five Boat Races, and Cambridge saw their first non-British rower compete.

The 68th Women's Boat Race took place on 24 March 2013. The race, between crews representing Oxford University Women's Boat Club and Cambridge University Women's Boat Club, was conducted as part of the Henley Boat Races. It took place on a 2 km (1.2 mi) stretch of water on 2012 Olympic venue Dorney Lake. Cambridge were the heavier of the crews and consisted of an all-British crew, while Oxford's boat included a Hungarian rower and an American cox. Oxford won the race by one and three-quarter lengths in a time of 7 minutes 11 seconds, their first win since the 2011 race. The victory took the overall record in the event to 41–27 in Cambridge's favour.