Shearer was a craftsman and the author of most of the plates in The Cabinet Maker's London Book of Prices and Designs of Cabinet Work, issued in 1788 "for the London Society of Cabinet Makers." The majority of these plates were republished separately as Designs for Household Furniture. They exhibit their author as a man with an eye at once for simplicity of design and delicacy of proportion; some of his pieces possess a dainty and slender elegance which were a high mark in the history of English furniture. [2]

There can be little doubt that Shearer exercised considerable influence over George Hepplewhite, with whom there is reason to suppose that he was closely associated, while Thomas Sheraton has recorded his admiration for work which has often been attributed to others. Shearer, in his turn, owes something to the Adam brothers, and something, no doubt, to the stock designs of his predecessors. [2]

There is every reason to suppose that he worked at his craft with his own hands and that he was literally a cabinet-maker—so far as we know, he never made chairs. Much of the elegance of Shearer's work is due to his graceful and reticent employment of inlays of satinwood and other foreign woods. But he was as successful in form as in decoration, and no man ever used the curve to better purpose. [2]

In Shearer's time the sideboard was in process of evolution; previously it had been a table with drawers, the pedestals and knife-boxes being separate pieces. He would seem to have been first to combine them into the familiar and often beautiful form they took at the end of the 18th century. The combination may have been made before, but his plate seemed to have been the first published document to show it. [2]

Shearer, like many of his contemporaries, was much given to devising "harlequin" furniture. According to the Encyclopædia Britannica Eleventh Edition, "[h]e was a designer of high merit and real originality, and occupies a distinguished place among the little band of men, often, like himself, ill-educated and obscure of origin, who raised the English cabinet-making of the second half of the 18th century to an illustrious place in artistic history." [2]

Thomas Chippendale (1718–1779) was born in Otley in the West Riding of Yorkshire, England in June 1718. He became a cabinet-maker in London, designing furniture in the mid-Georgian, English Rococo, and Neoclassical styles. In 1754 he published a book of his designs, titled The Gentleman and Cabinet Maker's Director, upon which success he became renowned. The designs are regarded as representing the current British fashion for furniture of that period and are now reproduced globally. He was buried 16 November 1779, according to the records of St Martin-in-the-Fields, in the cemetery since built upon by the National Gallery. Chippendale furniture is much valued; a padouk cabinet that was offered for auction during 2008 sold for £2,729,250.

Thomas Sheraton was a furniture designer, one of the "big three" English furniture makers of the 18th century, along with Thomas Chippendale and George Hepplewhite. Sheraton gave his name to a style of furniture characterized by a feminine refinement of late Georgian styles and became the most powerful source of inspiration behind the furniture of the late 18th century.

George Hepplewhite was a cabinetmaker. He is regarded as having been one of the "big three" English furniture makers of the 18th century, along with Thomas Sheraton and Thomas Chippendale. There are no pieces of furniture made by Hepplewhite or his firm known to exist but he gave his name to a distinctive style of light, elegant furniture that was fashionable between about 1775 and 1800 and reproductions of his designs continued through the following centuries. One characteristic that is seen in many of his designs is a shield-shaped chair back, where an expansive shield appeared in place of a narrower splat design.

Michael Angelo Pergolesi was an Italian decorative artist from the 18th century who worked mainly in England.

The Cabinet-Maker and Upholsterer's Guide is a famous antiquarian book, reference book, and non-fiction work. Many cabinetmakers and furniture designers still use it as a ready reference for making period furniture or designs inspired by the late 18th century era. Historians of domestic life or the History of Technology use it for establishing context for their research. Finally, collectors are willing to pay a good sum for the original editions.

Robert Manwaring was an English 18th century furniture designer and cabinet maker. The dates of his birth and death are unknown.

Placido Columbani was an Italian architectural designer who worked chiefly in England in the latter part of the 18th century. He belonged to the school of the Adams and Pergolesi, and like them frequently designed the enrichments of furniture. He was a prolific producer of chimney-pieces, which are often mistaken for Adam work, of moulded friezes, and painted plaques for cabinets and the like.

Campaign furniture is a type of furniture made for travel. Historically, much of it was made for military campaigns.

Jean Le Pautre or Lepautre was a French designer and engraver, the elder brother of the architect Antoine Le Pautre, the father of the engravers Pierre Le Pautre and Jacques Le Pautre, and the uncle of the sculptor Pierre Lepautre. Jean Le Pautre was an apprentice to a carpenter and builder. In addition to learning mechanical and constructive work, he developed considerable skill with the pencil. His designs, innumerable in quantity and exuberant in content, consisted mainly of ceilings, friezes, chimney-pieces, doorways and mural decorations. He also devised fire-dogs, sideboards, cabinets, console tables, mirrors and other pieces of furniture.

Henry Copeland, aka Henry Copland, was an 18th-century English cabinetmaker and furniture designer. In partnership with Mathias Locke during the mid-18th century in London, they produced many furniture designs in the Rococo Furniture Style. However both men worked for Thomas Chippendale the elder and many of their designs appear, without acknowledgement, in his book of designs, The Gentleman and Cabinet Makers Director, published two years later. However a study of the original drawings suggests that they may have actively collaborated with Chippendale on his book.

Matthias Lock was an English 18th century furniture designer and cabinet-maker. The dates of his birth and death are unknown; but he was a disciple of Thomas Chippendale, and subsequently of the Adams, and was possibly in partnership with Henry Copeland.

Ince and Mayhew were a partnership of furniture designers, upholsterers and cabinetmakers, founded and run by William Ince (1737–1804) and John Mayhew (1736–1811) in London, from 1759 to 1803; Mayhew continued alone in business until 1809. Their premises were located in Marshall Street but were listed in London directories in Broad Street, Soho, 1763–83, and in Marshall Street, Carnaby Market, 1783–1809. The partnership's volume of engraved designs, The Universal System of Household Furniture, dedicated to the Duke of Marlborough, was issued in imitative rivalry with Thomas Chippendale; Ince, who was a subscriber to the first edition of Chippendale's Director, was chiefly responsible for the designs, while Mayhew contributed the greater part of the partnership's capital, kept the accounts, and was in closer contact with the firm's clientele among the nobility and gentry. The name of the firm originally appears to have been "Mayhew and Ince", but on the title page of The Universal System the names are reversed, suggesting that Ince was the more extensive contributor. 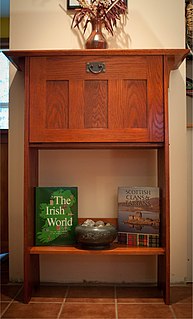 A cellarette or cellaret is a small furniture cabinet, available in various sizes, shapes, and designs which is used to store bottles of alcoholic beverages such as wine or whiskey. They usually come with some type of security such as a lock to protect the contents. Such wooden containers for alcoholic beverages appeared in Europe as early as the fifteenth century. They first appeared in America in the early eighteenth century and were popular through the nineteenth century. They were usually made of a decorative wood and sometimes had special designs so as to conceal them from the casual observer. They were found in pubs, taverns, and homes of the wealthy.

Frits Henningsen (1889–1965) was a Danish furniture designer and cabinet maker who achieved high standards of quality with exclusively handmade pieces. 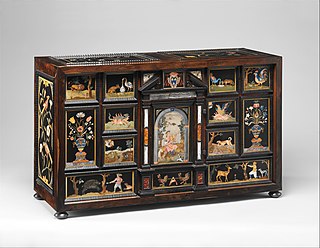 A cabinet is a box-shaped piece of furniture with doors and/or drawers for storing miscellaneous items. Some cabinets stand alone while others are built in to a wall or are attached to it like a medicine cabinet. Cabinets are typically made of wood, coated steel, or synthetic materials. Commercial grade cabinets, which differ in the materials used, are called casework, casegoods, or case furniture.

Modern Gothic exhibition cabinet is a piece of Modern Gothic furniture now in the collection of the Metropolitan Museum of Art. Although its design was once attributed to Philadelphia architect Frank Furness and furniture maker Daniel Pabst, MMA now credits its design and manufacture to Pabst alone. At 8 feet (2.4 m) tall, it is an unusually large and polychromatic American example of the rare style.