He sang and wrote poetry in the Manx language and in English. His poems include, Yn Coayl jeh'n Lillee (The Loss of the Lily), [2] Happy Marriage of the Prince of Wales, and The Royal Manx Railway, or £5 of wit for a penny. [1]

Happy Marriage of the Prince of Wales

But the despised metropolis, I call it Castletown, Although the Governor were amiss, In honour did abound; 'Twas not alone the poor were fed, But tradesmen and there spouse, To the Town Hall were freely led, And quickly filled the house.

Thomas Edward Brown, commonly referred to as T. E. Brown, was a late-Victorian scholar, schoolmaster, poet, and theologian from the Isle of Man.

The Manx Labour Party is a political party on the Isle of Man that was founded in 1918.

Manx English, or Anglo-Manx, is the historic dialect of English spoken on the Isle of Man, though today in decline. It has many borrowings from Manx, a Goidelic language, and it differs widely from any other variety of English, including dialects from other areas in which Celtic languages are or were spoken, such as Welsh English and Hiberno-English.

John Shimmin is a former Member of the House of Keys for Douglas West.

Shimmin is a surname of Manx origin. The name is derived from the Manx Gaelic McSimeen, meaning "little Simon's son". Early records of the name include, MacSimon in 1366, MacShemine in 1430, and Shimin in 1614.

TSS Duke of Clarence was a passenger vessel operated jointly by the London and North Western Railway and the Lancashire and Yorkshire Railway (LYR) from 1892 between Fleetwood and northern Irish ports. In 1906 the LYR bought her outright and transferred her to their summer service from Hull to Zeebrugge, returning to the Irish Sea in winter. During the First World War Duke of Clarence served as an armed boarding steamer. She resumed passenger service in 1920, passing through changes of ownership in the reorganisations of Britain's railway companies in the 1920s, until she was scrapped in 1930. 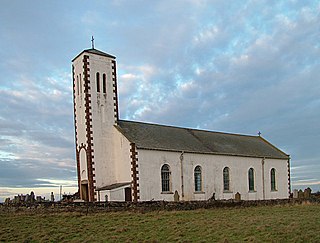 Esther Nelson (1810–1843) was a Manx poet best remembered for her book, Island Minstrelsy.

William Walter Gill (1876–1963) was a Manx scholar, folklorist and poet. He is best remembered for his three volumes of A Manx Scrapbook.

The Peel Players were an amateur theatre group from the Isle of Man in operation during the 1910s and specialising in Anglo-Manx dialect productions.

Marion Shimmin was elected in 1933 as the first woman member of the House of Keys representing the constituency of Peel in the Isle of Man. She replaced her husband, Christopher R. Shimmin, who died in January 1933. Both Marion and Christopher were MHKs representing the Manx Labour Party.

The Charm is a comic one-act Manx dialect play by Christopher R. Shimmin. It was first performed in 1912 by the Peel Players and it is considered to be one of the earliest and most frequently performed pieces in the Manx dialect repertoire.

Thomas Dodd (1883–1963) was a Manx dialect performer, a member of The Peel Players and a student of the Manx language.

Juan Noa was the pen-name of John Henry Cleator, a Manx dialect poet and playwright active from the 1920s to the 1960s in the Isle of Man.

William Thomas Quirk (1908-1977) was a Manx poet, composer and teacher. He was most prolific in the publishing of his poems towards the end of his life, in the 1960s and 70s.

The Manannan Ballad or ManxTraditionary Ballad is a poem in Early Manx dating from about the beginning of the 16th century. It gives an account of the history of the Isle of Man and its rulers, ranging from the mythical Manannán mac Lir up to Thomas Stanley, 1st Earl of Derby. The Manannan Ballad is the oldest datable work in the Manx language.

William 'Bill' Shimmins is a Scottish-born Manx politician. He represented the constituency of Middle in the House of Keys until 2021, having been first elected in 2016.