Thomas M. Siebel (born November 20, 1952) is an American billionaire businessman, technologist, and author. He was the founder of enterprise software company Siebel Systems and is the founder, chairman, and CEO of C3.ai, an artificial intelligence software platform and applications company. [2] [3]

He is the chairman of First Virtual Group, a diversified holding company with interests in investment management, commercial real estate, agribusiness, and philanthropy. [4]

Siebel has been a frequent industry spokesperson. He is the author of the Wall Street Journal bestseller Digital Transformation: Survive and Thrive in an Era of Mass Extinction (RosettaBooks, 2019) [5] and three previous books: Cyber Rules (1999), and Taking Care of eBusiness (2001) published by Doubleday, and Virtual Selling (1996), published by the Free Press. [6]

Siebel was born in Chicago, one of seven children of Arthur Francis Siebel, a Harvard-educated lawyer, and Ruth A. (née Schmid) Siebel, a housewife. [7] [8] [9] He has five brothers and one sister: Frances Cihak; Richard (who served as Cook County Commissioner), James, William, Robert, and John. [10] His family was Lutheran. [7] [10] [11] Siebel is a graduate of the University of Illinois at Urbana-Champaign, where he received a B.A. in history, an M.B.A., an M.S. in computer science, [12] and an honorary doctorate of engineering. [13]

From 1984 through 1990, Siebel was an executive at Oracle Corporation, where he held a number of management positions. [14] [15] Siebel served as chief executive officer of Gain Technology, a multimedia software company that merged with Sybase in December 1992. [15] Siebel was the founder, chairman, and chief executive officer of Siebel Systems, [16] which was acquired by Oracle in January 2006. [17] Siebel is the chairman of First Virtual Group, a diversified holding company. [4]

Siebel Systems was a software company principally engaged in the design, development, marketing, and support of customer relationship management (CRM) applications. As an executive at Oracle, Siebel proposed the idea of creating enterprise software applications tailored for marketing, sales, and customer service functions. Oracle management declined his proposal. Siebel founded Siebel Systems in 1993 to pursue that opportunity. [18] In 1999, Siebel Systems became the fastest-growing technology company in the United States. [19] Siebel Systems grew to over 8,000 employees in 32 countries, more than 4,500 corporate customers, and annual revenue greater than $2 billion before merging with Oracle in January 2006. [20]

Siebel's fourth book, Digital Transformation, became a Wall Street Journal bestseller in July 2019. [28] In the book Siebel discusses how the confluence of four modern information technology vectors—elastic cloud computing, big data, artificial intelligence, and the internet of things—is impacting business, government, and society. He characterizes the 21st century as a period of corporate mass extinction. He states that since 2000, 52 percent of Fortune 500 companies have fallen off the list, and he discusses how new companies like Amazon, Uber, Tesla, Airbnb, and others have emerged and grown during this time. [29]

Siebel claims that in order to survive and thrive in the 21st century, organizations must undergo digital transformation by harnessing the four information technologies discussed in the book. The book provides advice to organizations in the form of a 10-point CEO action plan. [30]

Siebel is a proponent of building a “self-learning corporate culture” that motivates employees to continue their education on the job. C3.ai offers cash awards of $1,000 to $1,500 to employees for each course they complete from a curated Coursera curriculum. [31] In 2019, Siebel initiated a program at C3.ai that pays 100 percent of the costs for employees to complete an online master's degree of computer science (MCS) program from the University of Illinois at Urbana-Champaign. Employees who complete the MCS degree receive a salary increase of 15 percent, a cash bonus of $25‚000, and additional stock options. [32]

In 2013, the American Academy of Arts and Sciences electedTom Siebel as a member. [33]

Siebel received the David Packard Award for his achievements as a technology entrepreneur and his contributions to national security from the Business Executives for National Security in 2002 and was named one of the Top 25 Managers in the World by BusinessWeek in 2000 and 2001. [44] [45]

The Siebel Foundation (founded 1996) is active in support of the homeless and underprivileged, educational and research programs, methamphetamine abuse prevention, and alternative energy solutions. [61] The Siebel Foundation created the Siebel Scholars Foundation, the Siebel Energy Institute, and the Dearborn Scholars Fund in Montana. In 2005, Siebel founded the Montana Meth Project. [4] [62] The Office of National Drug Control Policy awarded the Meth Project a White House commendation as the most influential prevention campaign in 2006, and Tom Siebel accepted the award on the program's behalf. [63] He was also recognized for his work on the program with the 2006 Director's Community Leadership Award from the Federal Bureau of Investigation. [64] [65] [66] [67] [68]

In April 2014, Congresswoman Jackie Speier from California met with C3 Energy executives, including Siebel, to discuss how the latest developments in IT are being applied to the power grid. [79]

A part-time Montana resident, Siebel owns and operates the Dearborn Ranch in Wolf Creek, Montana, a working cattle ranch. [80] Siebel's time in Montana has extended over a period of 35 years.

On the morning of August 1, 2009, he and a guide were in Tanzania, observing a group of elephants from 200 yards away, when an elephant charged Siebel's guide and then turned on Siebel, breaking several ribs, goring him in the left leg, and crushing the right. [81] [82] They radioed for help, but it was three hours before he received any medical treatment. [81] He was flown to the Aga Khan University Hospital in Nairobi, where they cleaned his wounds and stabilized his leg. He was then flown back to the United States on a 20-hour flight with only 10-hours of morphine and 15 hours of fluids. He had lost half of his fluids and was put in the intensive care unit. [83] He was moved to Stanford Hospital where, over the next six months, they performed 11 surgeries, fixed his ribs and shoulder, and saved his left leg. [82]

In September 2010, a year after the attack, Siebel had undergone 16 surgeries and an Ilizarov apparatus external fixator to mend, lengthen, and reshape the tibia of his right leg. [83] After enduring 19 reconstructive surgeries total over two and a half years, Siebel has now made a full recovery. [84] In 2013, National Geographic included Siebel's account in its TV series Dead or Alive: Trampled on Safari. [85]

Customer relationship management (CRM) is an approach to manage a company's interaction with current and potential customers. It uses data analysis about customers' history with a company to improve business relationships with customers, specifically focusing on customer retention and ultimately driving sales growth.

Lawrence Joseph Ellison is an American businessman, entrepreneur, and philanthropist who is a co-founder and the executive chairman and chief technology officer (CTO) of Oracle Corporation. As of October 2019, he was listed by Forbes magazine as the fourth-wealthiest person in the United States and as the sixth-wealthiest in the world, with a fortune of $69.1 billion, increased from $54.5 billion in 2018.

Siebel CRM Systems, Inc. was a software company principally engaged in the design, development, marketing, and support of customer relationship management (CRM) applications. The company was founded by Thomas Siebel and Patricia House in 1993. At first known mainly for its sales force automation products, the company expanded into the broader CRM market. By the late 1990s, Siebel Systems was the dominant CRM vendor, peaking at 45% market share in 2002.

Portal Software was founded in 1985 as Portal Information Network, one of the first Internet Service Provider in the San Francisco Bay Area. It was founded by John Little. The company offered its own interface through modem access that featured Internet email. Towards the end of the 1980s, the company offered FTP.

Oracle Applications comprise the applications software or business software of the Oracle Corporation. The term refers to the non-database and non-middleware parts.

Charles E. Phillips is an American business executive in the tech industry. From 2010 to 2019 he was the CEO of Infor, a company that specializes in enterprise software applications for specific industries. As of August 2019, he is Chairman of the board at Infor.

Oracle RightNow is a customer relationship management (CRM) software service for enterprise organizations. It was originally developed by RightNow Technologies, Inc., which was acquired by Oracle Corporation in 2011. 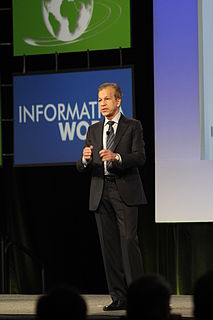 Sohaib Abbasi is a Pakistani-American business executive, computer scientist and philanthropist. He is the former chairman and chief executive of Informatica having served in the roles from 2004 until 2015. During his tenure as CEO, Abbasi helped to grow the company's revenue from $219 million to over $1 billion, and to increase the value of stock by over 800 percent.

Safra A. Catz is an Israeli-born American banker and technology executive. She is the current CEO of Oracle Corporation. She has been an executive at Oracle Corporation since April 1999, and a board member since 2001. In April 2011, she was named co-President and Chief Financial Officer (CFO), reporting to founder Larry Ellison. On September 18, 2014, Oracle announced that Larry Ellison would step down as CEO and that Mark Hurd and Catz had been named as the new Chief Executives.

BigMachines is a software company, founded in 2000 by Godard Abel and Christopher Shutts and headquartered in Deerfield, Illinois, United States with development offices in San Mateo, California and Hyderabad, India. BigMachines also has European operations with offices in Frankfurt am Main, Germany, and London served by BigMachines AG as well as offices in Singapore, Tokyo, and Sydney, serving Asia-pacific. The company's software is designed to integrate with enterprise resource planning (ERP), customer relationship management (CRM), and other business systems.

Pegasystems Inc. is an American software company based in Cambridge, Massachusetts. Founded in 1983, Pegasystems develops software for customer relationship management (CRM), digital process automation, and business process management (BPM). The company has been publicly traded since 1996 as PEGA (NASDAQ). The company's core product is the Pega Platform, which is part of its Pega Infinity suite of applications for customer engagement and digital process automation.

Neolane, Inc. is a conversational marketing technology provider, which develops marketing automation and cross-channel campaign management software and services for business-to-business and business-to-consumer marketers. In 2012, Neolane recorded $58 million in revenue representing 40% year-over-year growth. It was announced in June 2013 that Adobe Systems would buy Neolane for $600 million. 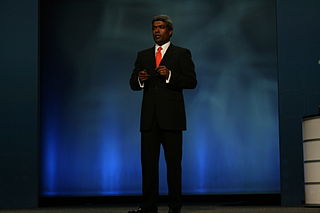 Thomas Kurian was President of Product Development at Oracle Corporation from 1996 to 2018. On November 16, 2018, Google announced that Kurian would join as CEO of Google Cloud, replacing Diane Greene. 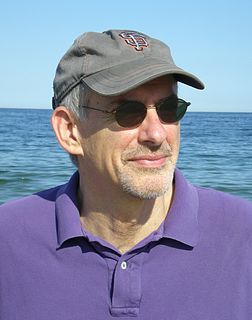 Keith Raffel is an American novelist, technology executive, university lecturer, and former United States Senate aide and political candidate. He is the author of five novels: Dot Dead (2006), Smasher (2009), Drop By Drop: A Thriller (2011), A Fine and Dangerous Season (2012), and Temple Mount (2014). After graduating from Harvard Law School, Raffel served as counsel to the United States Senate Select Committee on Intelligence during the late 1970s and early 1980s. He returned to his home state of California in 1982, where he unsuccessfully ran for United States Congress. Raffel then embarked on business career in the technology sector. In 1996, he founded UpShot Corporation, a customer relationship management (CRM) software company that was a pioneer in cloud computing and was later acquired by Siebel Systems. From 2011 to 2013 Raffel served as senior vice president and chief commercial officer at Complete Genomics, a life sciences company that specializes in human genome sequencing and analysis. He is currently a resident scholar and lecturer at Harvard University.

Aneel Bhusri is an enterprise software executive and investor. He is the co-founder and CEO of Workday, Inc., a partner at Greylock Partners, and a member of the board of directors of Intel.

Conversica is a US-based cloud software technology company. Conversica offers a suite of Intelligent Virtual Assistants for business, with a focus on Customer Experience business functions. Powered by Artificial Intelligence, the Intelligent Virtual Assistants (IVA) interact with leads and customers in a human-like way, like an entry level employee. The IVA software interacts over multiple channels, including email and SMS text messages, and in multiple languages. Conversica is a pioneer in providing AI-driven lead engagement software for marketing and sales organizations. Conversica is headquartered in Silicon Valley,.