Thomas Skeffington may refer to:

Thomas Cecil "Tom" Skeffington-Lodge was a British Labour Party politician. He was Member of Parliament (MP) for Bedford from 1945 to 1950.

Sir William Brereton, 1st Baronet was an English writer and politician who sat in the House of Commons at various times between 1628 and 1659. He was a commander in the Parliamentary army in the English Civil War.

Johanna Mary "Hanna" Sheehy Skeffington was a suffragette and Irish nationalist. Along with her husband Francis Sheehy-Skeffington, Margaret Cousins and James Cousins, she founded the Irish Women's Franchise League in 1908 with the aim of obtaining women's voting rights. She was later a founding member of the Irish Women Workers' Union. Her son, Owen Sheehy-Skeffington became a politician and Irish Senator.

Sir William Skeffington, was a Lord Deputy of Ireland.

Francis Joseph Christopher Sheehy-Skeffington, born Francis Skeffington, was a well-known Irish writer and radical activist, known publicly by the nickname "Skeffy". He is now principally remembered as the victim of a British war crime during the Easter 1916 rising. He was also the real-life model for a character in James Joyce's novel, A Portrait of the Artist as a Young Man. He was a friend and schoolmate of Joyce, Oliver St. John Gogarty, Tom Kettle, and Frank O'Brien. He married Hanna Sheehy in 1903, whose own surname he adopted as part of his name, resulting in the name "Sheehy Skeffington". They always showed their joined names unhyphenated.

Arthur Massey Skeffington was a British Labour Party politician who served as a Member of Parliament (MP) for 23 years from 1945 until his death in 1971.

Events from the year 1535 in Ireland. 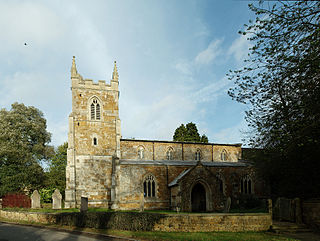 Skeffington is a village and civil parish in the Harborough district of Leicestershire, England. It lies 11 miles east of Leicester on the A47 Leicester to Uppingham road, between the parishes of Billesdon and Tugby and Keythorpe. The population at the 2011 census was 223.

Sir William Bowyer was an English politician who sat in the House of Commons at various times between 1614 and 1641.

Sir Richard Skeffington was an English landowner and politician who sat in the House of Commons at various times between 1625 and 1647.

Sir John Skeffington, 2nd Baronet was an English landowner and politician who sat in the House of Commons in 1626.

Events from the year 1531 in Ireland.