Lieutenant-Colonel Thomas Skinner (1759 – 6 February 1818) was a British military engineer born in England at Berwick-upon-Tweed. He died at Le Havre, France.

Berwick-upon-Tweed is a town in the county of Northumberland. It is the northernmost town in England, at the mouth of the River Tweed on the east coast, 2 1⁄2 miles (4 km) south of the Scottish border. Berwick is approximately 56 miles (90 km) east-south east of Edinburgh, 65 miles (105 km) north of Newcastle upon Tyne and 345 miles (555 km) north of London.

Skinner was born to Thomas and Hester Skinner in Berwick upon Tweed. His grandfather was Lt. Col. William Skinner who was the Chief Engineer in Scotland, Gibraltar and Great Britain.

Lieutenant-General William Skinner was Chief Royal Engineer of Great Britain from 1757 until his death in 1780. He is best known for his work on the fortifications of Menorca and Gibraltar although he considered his work on Fort George to be his "monument".

Skinner came to Newfoundland in 1790 as chief engineer and spent 13 years working on fortifications and other military matters. War with France, starting in 1793, depleted the St John's garrison as they occupied the islands of Saint-Pierre and Miquelon. He recruited four companies, called the Royal Newfoundland Volunteers, to bolster the defence of St John's.

St. John's is the capital and largest city of the Canadian province of Newfoundland and Labrador. It is on the eastern tip of the Avalon Peninsula on the large Canadian island, Newfoundland. The city spans 446.04 square kilometres (172.22 sq mi) and is North America's easternmost city.

Skinner later recruited and took command of the Royal Newfoundland Fencible Regiment which was disbanded with the peace of 1802. In 1803, he left Newfoundland and retired a few years later. He must be recognized as having strengthened defences in Newfoundland under difficult circumstance, serving a number of governors who were often at variance with the military authorities.

Admiral of the Fleet The Hon. George Clinton was a Royal Navy officer and politician. Benefiting from the patronage of Thomas Pelham-Holles, 1st Duke of Newcastle, he served as a naval captain during the 1720s and 1730s.

The Royal Newfoundland Regiment is a Primary Reserve infantry regiment of the Canadian Army. It is part of the 5th Canadian Division's 37 Canadian Brigade Group. 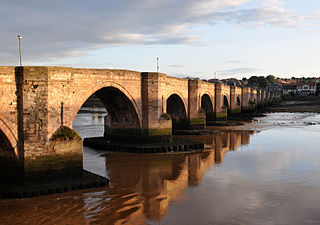 Berwick Bridge, also known as the Old Bridge, spans the River Tweed in Berwick-upon-Tweed, Northumberland, England. The current structure is a Grade I listed stone bridge built between 1611 and 1624.

The Royal Tweed Bridge is a road bridge in Berwick-upon-Tweed, Northumberland, England crossing the River Tweed. It was intended to divert traffic from the 17th century Berwick Bridge, and until the 1980s it formed part of the A1 road, the main route from London to Edinburgh. However, the construction of the A1 River Tweed Bridge to the west of Berwick has since reduced the Royal Tweed Bridge's importance. 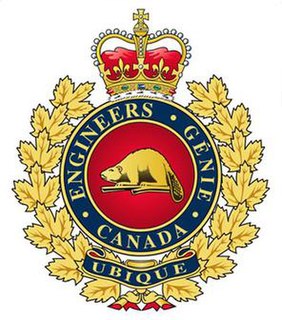 The Canadian Military Engineers (CME) is the military engineer branch of the Canadian Armed Forces. Members of the branch who wear army uniform comprise the Corps of Royal Canadian Engineers. 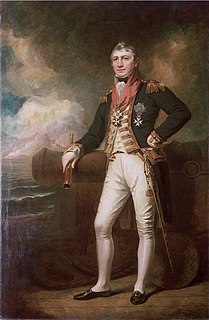 Lieutenant-General John Henry Bastide was a British army officer and military engineer who played a significant role in the early history of Nova Scotia. He was the chief engineer at both of the sieges of Louisbourg and the siege of Minorca (1756).

Major Thomas Bridges Boucher Skinner was a British Army officer and engineer. He was a prominent road builder in Ceylon. 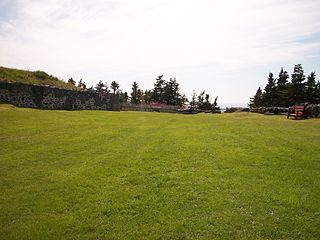 Castle Hill is an area containing the remains of both French and British fortifications, overlooking the town of Placentia in Newfoundland and Labrador, Canada. The site was originally established in order to protect the French fishing interests in Newfoundland and the approaches to the French colony of Canada.

Sir William Crossman was an officer in the Royal Engineers and a Liberal and Liberal Unionist politician.

The Capture of Berwick was the first significant battle of the First War of Scottish Independence in 1296.

John Catnach (1769–1813) was a Scottish born Geordie printer and publisher of the late 18th and early 19th century. 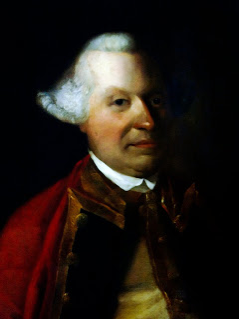 General Sir William Green, 1st Baronet, of Marass, Kent was an officer in the British Army.

The 1907 Birthday Honours for the British Empire were announced on 28 June, to celebrate the birthday of Edward VII.

The New Year Honours 1893 were appointments by Queen Victoria to various orders and honours to reward and highlight good works by members of the British Empire. They were published on 2 January 1893.

Lewis Petit des Etans was a French-born military engineer and brigadier-general in the British Army.