Thomas Skinner (1800? – 1843), was a British soldier and author. He commanded the 31st Foot in the First Anglo-Afghan War in 1842 and 1843. While there he was made a C.B. and brevet lieutenant-colonel. In 1832 he had published Excursions in India and four years later Adventures during a Journey Overland to India. [1]

Skinner went with his regiment to India shortly before 1826, and was stationed at Hardwar, in the North-West provinces, near the foot of the Himalayas. He made expeditions into little-known mountainous districts, and wrote up his explorations in Excursions in India (London, 1832). After returning home on leave, he went back to India in 1833 by the overland route through Egypt, Syria, and Palestine. He travelled down the Euphrates, and embarked on the Persian Gulf. He published an account of this journey in Adventures during a Journey Overland to India (London, 1836). [1]

On 24 November 1835 Skinner attained the rank of major, and in 1842 he joined the force assembled at Jalalabad under Sir George Pollock for the relief of Kabul. He commanded the 31st Foot in the campaign, and on 26 July 1842 was present at the conflict of Mazeena, near Jalalabad. He accompanied Pollock's advance, and was given the task of clearing the hills on the left of the valley of Tezin in the engagement there on 13 September. [1]

Skinner received for his services the Cross of the Order of the Bath and the Cabul medal, and was gazetted on 23 December to the brevet rank of lieutenant-colonel. He died at Landaur on 5 May 1843, [2] in bad health from the campaign. [1]

Field Marshal Hugh Gough, 1st Viscount Gough, was a British Army officer. After serving as a junior officer at the seizure of the Cape of Good Hope during the French Revolutionary Wars, Gough commanded the 2nd Battalion of the 87th Regiment of Foot during the Peninsular War. After serving as commander-in-chief of the British forces in China during the First Opium War, he became Commander-in-Chief, India and led the British forces in action against the Marathas defeating them decisively at the conclusion of the Gwalior Campaign and then commanded the troops that defeated the Sikhs during both the First Anglo-Sikh War and the Second Anglo-Sikh War. 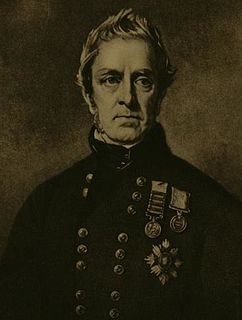 Field Marshal Sir George Pollock, 1st Baronet was a British Indian Army officer. He first saw action at the Battle of Deeg and at the Siege of Bhurtpore during the Second Anglo-Maratha War before taking part in the Anglo-Nepalese War. He also commanded the British artillery at the Battle of Prome and at Bagan during the First Anglo-Burmese War. Following a disastrous retreat from Kabul in January 1842 during the First Anglo-Afghan War, the retreating forces became stranded at the small British garrison at Jalalabad and Pollock was appointed Commander of the Force sent to relieve the garrison: he advanced through the Khyber Pass and relieved the garrison in April 1842. He then set about an unauthorised but ultimately successful mission to rescue the British hostages who had been left behind in Kabul prior to the retreat. In 1844 the Pollock Medal was created to commemorate Pollock's achievements: this medal was to be awarded to the "best cadet of the season" at the Addiscombe Military Seminary. 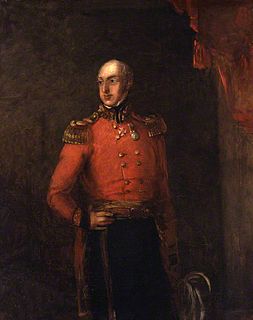 Major-General William George Keith Elphinstone CB was an officer of the British Army during the 19th century. 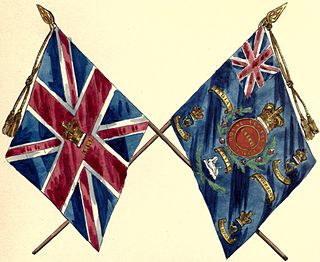 Major General Sir George Alexander William Leith, 2nd Baronet was the first Lieutenant-Governor of Prince of Wales' Island, taking the reins over from George Caunter, a magistrate who was acting superintendent following the resignation and departure of the last governor, Superintendent Major Forbes Ross MacDonald. Leith served in that position from his arrival in 1800 until 1804.

Lieutenant-General Sir James Frederick Lyon was a distinguished officer of the British Army who served as Governor of Barbados from 1829 to 1833.

Major-General Sir Vincent Eyre was an officer in the Indian Army, who saw active service in India and Afghanistan. 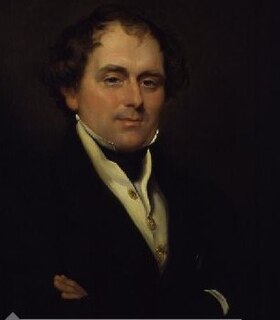 Thomas Fletcher Waghorn was an English sailor, navy officer, and postal pioneer who promoted and claimed the idea of a new route from Great Britain to India overland through Egypt prior to the development of the Suez Canal. Waghorn claimed to have demonstrated the route for the first time in 1829-30 and that it reduced the journey from over 11,000 miles (18,000 km) to 6,000 miles (9,700 km) and while steamships around the Cape of Good Hope took about three months, his route took between 35 and 45 days. A 2004 biography states that there is little substance to many of the claims that he made and that he was mostly a fraudulent self-publicist. This contradicts an earlier historical study. A statue of him stands in Chatham, Kent while another, now destroyed, was installed at Suez by Ferdinand de Lesseps in 1869.

Lieutenant-General Henry George Hart (1808–1878) was a British Army officer who was best known as the author, editor, and proprietor of Hart's Army List, an unofficial publication recording army service.

Lieutenant-General Sir John William Waters KCB was a Welsh officer in the British Army during the Napoleonic Wars.

Moyle Sherer was a British army officer, traveller and writer.

General George Alexander Malcolm, CB, was a British Army officer. He served in the First Anglo-Chinese War and became the first Colonial Secretary of Hong Kong in 1843.

John James Hood Gordon was a general in the British Army.