Smith was born at Abingdon in Berkshire (now Oxfordshire), about 1556. He was the son of Thomas Smith, who is almost certainly to be identified with the Thomas Smith who was Mayor of Abingdon in 1584. [1] He must be distinguished from Sir Thomas Smith or Smythe (1558?–1625), governor of the East India Company, and from the latter's father, Thomas Smythe (d. 1591), "customer" of the port of London. [2]

Soon afterwards he became secretary to Robert Devereux, second earl of Essex, and in 1587 was appointed clerk of the privy council. In December 1591 he wrote to Cecil urging Essex's claims to the chancellorship of Oxford University. [5] He represented Cricklade in the parliament of 1588–9, Tamworth in that of 1593, [6] and Aylesbury in that of 1597–8. On 30 September 1597 he received a grant of the clerkship of parliament, in succession to Anthony Wyckes, alias Mason. He kept aloof from Essex's intrigues, and on 29 November 1599 was sent by the lords to summon the earl before the privy council. [7] On the accession of James I he received further promotion, perhaps owing to his friendship with Carleton, Edmondes, Winwood, and Bacon. [8] He was knighted at Greenwich on 20 May 1603, and in the following month was granted the Latin secretaryship for life, and the reversion to the secretaryship of the council of the north. On 8 June 1604 he obtained the manor of Wing, Rutland, and in 1608 he was made master of requests. On 20 May in the same year he received a pension of £100. [9]

He died on 27 November 1609 at his residence (afterwards called Peterborough House) at Parsons Green, near Fulham, in Middlesex and was buried on 7 December in the chancel of Fulham parish church, where a monument, with an inscription to his memory, is extant. [10] He married Frances (1580–1663), daughter of William Brydges, 4th Baron Chandos, and sister of Grey Brydges, 5th Baron Chandos. His only son, Robert, died a minor, and his only daughter, Margaret, married Thomas, second son of Robert Carey, 1st Earl of Monmouth. Smith's widow married Thomas Cecil, 1st Earl of Exeter, and survived till 1663. By his will, dated 12 September 1609, Smith left £100 to the poor of Abingdon, and a similar sum to the Bodleian Library. [9] 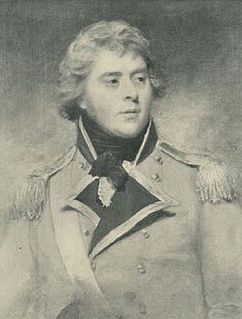 Grey Brydges, 5th Baron Chandos of Sudeley Castle in Gloucestershire, was an English nobleman and courtier.

Donogh O'Brien, 4th Earl of Thomond and Baron Ibrickan, was a Protestant Irish nobleman and soldier. He fought for Queen Elizabeth during Tyrone's Rebellion and participated at the Siege of Kinsale. His long-term objective, achieved after decades, was to obtain an official acknowledgment that County Clare, where his possessions were situated, was part of the Province of Munster, to free it from the jurisdiction of the Connaught government under which it had been placed.

John Stockwood was an English clergyman, preacher, translator of Protestant texts and school-master.

Sir Edward Denny, Knight Banneret, of Bishop's Stortford in Hertfordshire, was a soldier, privateer and adventurer during the reign of Queen Elizabeth I. 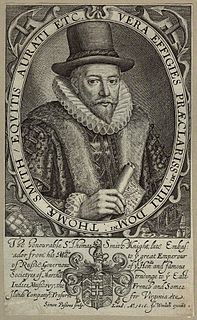 William Symonds D.D. was an English clergyman, known as a promoter of the Colony of Virginia. The arguments of Symonds in favour of the colony in 1609, equating the British nation with the biblical Abraham, and stating that Native Americans lacked property rights, have been seen as presaging later developments in the colonisation of North America. 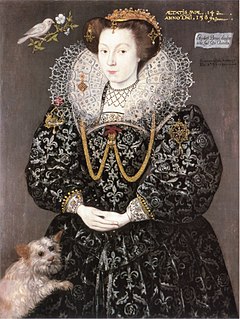 Frances Cecil, Countess of Exeter was an English noblewoman.