Thomas Smith (born 6 April 1854) was an English cricketer. He was a right-handed batsman and left-arm bowler who played for Surrey. He was born in Guildford.

Smith made a single first-class appearance for the side, during the 1876 season, against Sussex. From the lower-middle order, he scored 3 runs in the first innings in which he batted, and 13 runs in the second. 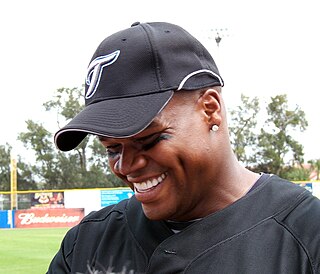 Frank Edward Thomas Jr., nicknamed "The Big Hurt", is an American former Hall of Fame first baseman and designated hitter in Major League Baseball who played for three American League (AL) teams from 1990 to 2008, all but the last three years with the Chicago White Sox. A five-time All-Star, he is the only player in major league history to have seven consecutive seasons (1991–1997) with at least a .300 batting average, 100 runs batted in (RBI), 100 runs scored, 100 walks, and 20 home runs. Thomas also won the AL batting title in 1997 with a .347 mark.

Graeme Craig Smith is a South African cricket commentator and former cricketer, who played for South Africa in all formats. In 2003, he was appointed captain of the national team, taking over from Shaun Pollock. He held the position of test captain until his retirement in 2014. He is regarded as one of the greatest South African players of all time. At 22, he was appointed as South Africa's youngest ever captain.

The 1982 World Series was the championship series of Major League Baseball's (MLB) 1982 season. The 79th edition of the World Series, it was a best-of-seven playoff played between the National League (NL) champion St. Louis Cardinals and the American League (AL) champion Milwaukee Brewers. The Cardinals won the series, four games to three.

Lonnie Smith is an American former Major League Baseball left fielder. He made his debut for the Philadelphia Phillies on September 2, 1978 and later played for the St. Louis Cardinals, Kansas City Royals, Atlanta Braves, Pittsburgh Pirates, and Baltimore Orioles. He overcame bouts with drug abuse to become one of the top base-stealers in baseball during the 1980s, with the seventh-most steals. He played on five pennant-winning teams, three of which won the World Series.

Harry Thomas Smith, was an English professional baseball player and manager. He played in Major League Baseball as a catcher from 1901 to 1910.

Claydes Charles Smith was an American musician best known as co-founder and lead guitarist of the group Kool & the Gang.

The 1982 Milwaukee Brewers season resulted in the team winning its first and only American League Championship.

Thomas Smith was an English cricketer. He was a right-handed batsman and a right-arm medium-pace round-arm bowler who played first-class cricket for Lancashire. He was born in Glossop.

Peter Luke Smith is a former pitcher in Major League Baseball who played from 1962 to 1963 for the Boston Red Sox. Listed at 6' 2", 190 lb., Smith batted and threw right-handed. A native of Natick, Massachusetts, he attended Colgate University.

Below is a partial list of minor league baseball players of the minor league affiliates of the Arizona Diamondbacks:

Thomas Smith was an English cricketer. He was a right-handed batsman who played for Northamptonshire. He was born and died in Northampton.

Thomas Henry Smith was an Australian cricketer. He was a left-handed batman who played for Queensland. He was born in Talgai and died in Warwick.

Thomas Michael Smith was an English cricketer who played for Hampshire County Cricket Club during 1923 and 1924.

The 1965–66 Ashes series consisted of five cricket Test matches, each of five days with six hours play and eight ball overs. It formed part of the MCC tour of Australia in 1965–66 and the matches outside the Tests were played in the name of the Marylebone Cricket Club. M.J.K. Smith led the England team with the intent on regaining the Ashes lost in the 1958–59 Ashes series, but the series was drawn 1-1 and they were retained by Australia. The Australian team was captained by Bobby Simpson in three Tests, and his vice-captain Brian Booth in two Tests. 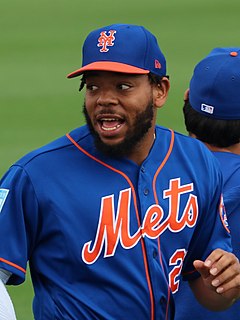 Dominic David Rene Smith is an American professional baseball first baseman for the New York Mets of Major League Baseball (MLB). He was selected by the Mets with the 11th overall pick of the 2013 MLB draft out of Junípero Serra High School in Gardena, California, and made his MLB debut in 2017. He bats and throws left-handed. His nickname, Medium Hurt, originates from a play on words of Hall-of-Famer Frank Thomas's nickname of the Big Hurt. 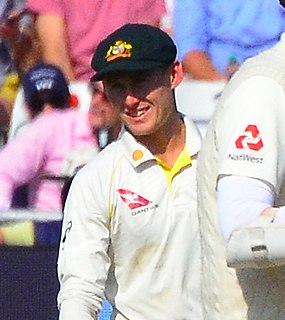 Marnus Labuschagne is a South African-born Australian cricketer who made his debut for Queensland during the 2014–15 Sheffield Shield season. He also plays for the Brisbane Heat. He made his Test debut for the Australian national team in October 2018. In August 2019, he was the first cricketer to become a concussion substitute in a Test match, replacing Steve Smith.