Born at Saffron Walden in Essex, Smith was the second son of John Smith of Walden by Agnes, daughter of John Charnock of Lancashire. The Smiths of Essex are said to be descendants of Sir Roger de Clarendon, an illegitimate son of the Black Prince. He was educated at Queens' College, Cambridge, where he became a Fellow in 1530, [1] and in 1533 was appointed a public reader or professor. He lectured in the schools on natural philosophy, and on Greek in his own College. In 1540 Smith went abroad, and, after studying in France and Italy and taking a degree in law at the University of Padua, returned to Cambridge in 1542. [2]

He now took the lead in the reform of the pronunciation of Greek, his views being universally adopted after considerable controversy. He and his friend, Sir John Cheke, were the great classical scholars of the time in England. In January 1543/4 he was appointed the first Regius Professor of Civil Law. He was vice-chancellor of the university the same year[ 43 or 44? ]. In 1547 he became Provost of Eton College and Dean of Carlisle Cathedral. [2]

Sir Thomas was an early convert to Protestantism, which brought him into prominence when Edward VI came to the throne. During the protectorate of Edward Seymour, 1st Duke of Somerset, he entered public life and was made the Secretary of State, and was sent on an important diplomatic mission to Brussels. In 1548 he was knighted. On the accession of Queen Mary I he lost all his offices, but in the reign of her sister, Elizabeth I, he was prominently employed in public affairs. [2]

He was returned as Member of Parliament for Liverpool in 1559. It became clear that he supported the religious settlement and Confessions of Westminster (1560), sitting on two committees of Inquiry. When an expert handler[ clarification needed ] of the son of the King of Sweden visiting Westminster, he was sent in 1562 as ambassador to France as an emerging diplomatic talent; he remained in France from September 1562 with experienced envoy Sir Nicholas Throckmorton; and in 1572 Smith again went to France in the same capacity for a short time. However Smith came to dagger blows with Throckmorton over character and policy differences. He finally returned home in disgrace after suffering illness in April 1566.

Nonetheless, Smith remained one of Elizabeth's most trusted Protestant counsellors. [2] He had long been a friend of Sir William Cecil. Ennobled as Lord Burghley, Cecil appointed Smith to the Privy Council, only a month before he was elected to Commons as a knight of the shire for Essex. Smith, a prime mover behind the Conformity Bills, sought to restrain extremism and secure a subsidy from his fellow members. But when he proposed that the bishops be consulted, the puritan William Fleetwood defeated his motion. As a Privy Councillor he was influential on a number of committees. He spoke on the Treason Bill on the floor of the house, and examined witnesses to the Catholic plot led by the Duke of Norfolk. He was noted as upholding a religious objection to torture. His outstanding work elevated him to the higher ministerial echelons: in 1572 he was appointed Chancellor of the Order of the Garter and in July, principal secretary. [3]

In 1571, Elizabeth I granted Smith 360,000 acres (150,000 ha) of East Ulster. The empty lands were to be used to plant English settlers in an effort to control areas claimed by Clandeboye O'Neill territory and thus control the native Irish. The grant included all of the area known today as North Down and the Ards, apart from the southern tip of the Ards peninsula which was controlled by the Anglo-Norman Savage family.[ citation needed ]

Unfortunately for Smith, the booklet he printed to advertise his new lands was read by the Clandeboye O'Neill chief, Sir Brian MacPhelim, who just a few years earlier had been knighted by Elizabeth. Furious at what he saw as her "duplicity" in secretly arranging for the colonisation of unsettled areas claimed by O'Neill, he burned down all the major buildings in the area. The owners objected, but could do nothing. This made it difficult for the plantation to take hold. Then launching a wave of attacks on these early English settlers when they arrived, the O'Neills scorched the land Smith was to develop, burning abbeys, monasteries and churches, and leaving Clandeboye "totally waste and void of inhabitants". [4]

Smith had no issue by either marriage, although he had one illegitimate son named Thomas, who was killed during the failed Ards settlement. His heirs were his younger brother, George, and George's son, Sir William Smith (died 12 December 1626) of Theydon Mount, Essex. [10] Sir William Smith's daughter, Frances Smith, married Sir Matthew Brend, owner of the land on which the first and second Globe Theatres were built. [11] Edward de Vere, 17th Earl of Oxford, was brought up in Smith's house and his early education was supervised by him. [12]

Sir Thomas Smith's book De Republica Anglorum: the Maner of Gouernement or Policie of the Realme of England, [13] written between 1562 and 1565, was first published in 1583. [14] In it, he described England as a mixed government and a commonwealth, and stated that all commonwealths are of mixed character.

Wikisource has original works by or about:
Thomas Smith 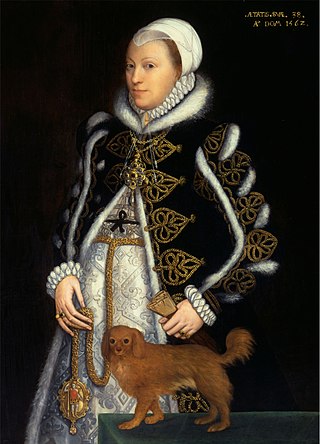 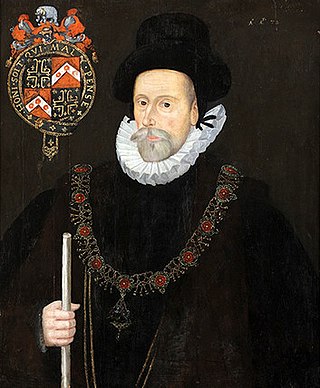 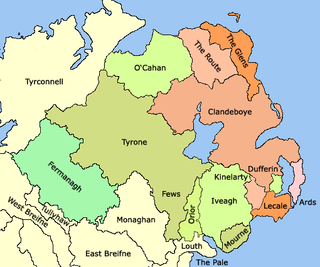 Clandeboye or Clannaboy was a kingdom of Gaelic Ireland, comprising what is now south County Antrim, north County Down, and the barony of Loughinsholin, Northern Ireland. The entity was relatively late in appearance and is associated partly with the Gaelic resurgence of the High Middle Ages. The O'Neill Clandeboy who reigned in the territory descended from Hugh Boy O'Neill, a king of Tyrone. His descendants took advantage of the demise of the Earldom of Ulster during the latter 14th century and seized vast portions of territory. Clandeboye's main seats of power were Shane's Castle and Castle Reagh. 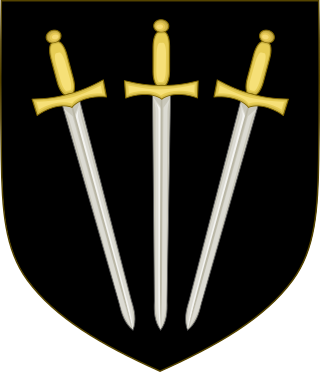 Saffron Walden Free Grammar School was a school in the Essex town of Saffron Walden, which for over four hundred years educated the boys of the town and surrounding villages in a manner designed to be after the model of Eton College and Winchester. It was notable for its longevity and for some of its illustrious alumni.

Events from the year 1574 in Ireland.

Sir Brian McPhelim Bacagh O'Neill was a lord of Lower Clandeboye, a Gaelic lordship in north-eastern Ireland during the Tudor period. 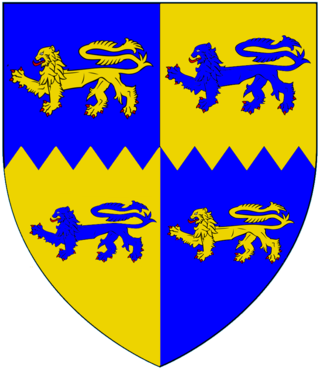 Sir Richard Edgcumbe was an English courtier and politician.

William Piers was an English constable, who spent most of his life in Ireland. He was the first mayor and practical founder of Carrickfergus. He was noted in particular for his attempts to drive out the Scots from Ulster and the great lengths that he went to in attempting to enhance the power of local chiefs at the expense of the Scots. Granted Tristernagh Abbey as a reward for his military services, he made it into his family home from the late 1560s until his death in 1603.

The Clandeboye massacre in 1574 was a massacre of the O'Neills of Lower Clandeboye by the English forces of Walter Devereux, 1st Earl of Essex. It took place during an attempted English colonisation of Ulster as part of the Tudor conquest of Ireland. The Lord of Lower Clandeboye, Sir Brian McPhelim O'Neill, had violently opposed these attempts at colonisation. O'Neill would invite Lord Essex to parley at his castle in Belfast; however, at the end of the feast, the English forces turned on the O'Neills and killed up to 200 of them including women and children. Essex ordered that O'Neill, his wife and brother to be seized and executed for treason and for opposing the plantations.