Sopwith was born in Kensington, London on 18 January 1888. He was the eighth child and only son of Thomas Sopwith (a civil engineer and managing director of the Spanish Lead Mines Company, Linares, Jaén, Spain) and his wife Lydia Gertrude née Messiter. [1] He was a grandson of mining engineer Thomas Sopwith. [2] He was educated at Cottesmore School in Hove and at Seafield Park engineering college in Hill Head. [3]

When he was ten years old, on 30 July 1898 whilst on a family holiday on the Isle of Lismore, near Oban in Scotland, a gun lying across young Thomas's knee went off, killing his father. This accident haunted Sopwith for the rest of his life. [1]

Sopwith was interested in motor cycles, and took part in the 100-mile Tricar trial in 1904 where he was one of four medal winners. [4] He also tried hot air ballooning, his first ascent being in C.S. Rolls' balloon in June 1906. [5] Together with Phil Paddon he bought his own hot air balloon from Short Brothers. [5] For a while he was in business with Phil Paddon selling automobiles as Paddon & Sopwith, Albemarle Street, Piccadilly, London. [5]

In his youth, he was an expert ice skater and played in goal during Princes Ice Hockey Club's 1908 match with C. P. P. Paris and during the 1909–10 season. [6] He was also a member of the Great Britain national ice hockey team that won the gold medal at the first European Championships in 1910. [7]

Sopwith became interested in flying after seeing John Moisant flying the first cross-Channel passenger flight. His first flight was with Gustave Blondeau in a Farman at Brooklands. He soon taught himself to fly on a Howard Wright Avis monoplane and took to the air on his own for the first time on 22 October 1910. He crashed after travelling about 300 yards (275 m), but soon improved, and on 22 November was awarded Royal Aero Club Aviation Certificate No. 31, flying a Howard Wright 1910 Biplane.

On 18 December 1910, Sopwith won a £4000 prize for the longest flight from England to the Continent in a British-built aeroplane, flying 169 miles (272 km) in 3 hours 40 minutes. He used the winnings to set up the Sopwith School of Flying at Brooklands.

In June 1912 Sopwith, along with Fred Sigrist and others, set up the Sopwith Aviation Company, initially at Brooklands. [8] On 24 October 1912 using a Wright Model B completely rebuilt by Sopwith and fitted with an ABC 40 hp engine, [9] Harry Hawker took the British Michelin Endurance prize with a flight of 8h 23m. Sopwith Aviation got its first military aircraft order in November 1912, and in December moved to larger premises in Kingston upon Thames. The company produced more than 18,000 World War I aircraft for the allied forces, including 5747 of the Sopwith Camel single-seat fighter. Sopwith was awarded the CBE in 1918.

Bankrupted after the war by punitive anti-profiteering taxes, he re-entered the aviation business in 1920 with a new firm named after his chief engineer and test pilot, Harry Hawker. Sopwith became chairman of the new firm, Hawker Aircraft.

He became a Knight Bachelor in 1953. After the nationalisation in 1977 of the aviation interests of what was by then Hawker Siddeley, he continued to work as a consultant to the company until 1980.

In 1979, Sopwith was inducted into the International Air & Space Hall of Fame at the San Diego Air & Space Museum. [10]

He was a member of the Air Squadron flying club.

Sopwith challenged the America's Cup with his J-class yachts, Endeavour , in 1934, and with Endeavour II in 1937. Both yachts were designed by Charles E. Nicholson. Sopwith funded, organised and helmed the yachts. He did not win the Cup but he became a Cup legend by nearly winning it in 1934. He was inducted into the America's Cup Hall of Fame in 1995.

In 1927 Sopwith commissioned yacht builders Camper and Nicholsons to build a luxury motor yacht he named Vita. She was sold in 1929 to Sir John Shelley-Rolls who renamed her Alastor. [11] During World War II the Royal Navy commandeered her to ferry provisions to Navy vessels moored at the entrance to Strangford Lough. In 1946 a fire gutted her and she sank in Ringhaddy Sound in Strangford Lough. [12]

In 1937 Sopwith received the yacht Philante , also built for him by Camper and Nicholsons. During the War the ship was requisitioned by the Royal Navy and used as a convoy escort vessel, HMS Philante . After the war the vessel was returned to Sopwith and he sold her to Norway in 1947, to be used as a royal yacht for the Norwegian king.

Sopwith married Beatrice Hore-Ruthven (1871–1930) in 1914; they had no children. Beatrice was the daughter of Walter Hore-Ruthven, who in 1919 was created Baron Ruthven of Gowrie. After Beatrice's death, in 1932 he married Phyllis Brodie Gordon (1892–1978); their son Thomas Edward Brodie Sopwith had success in car racing.

Sopwith's 100th birthday was marked by a flypast of military aircraft over his home, Compton Manor in King's Somborne, Hampshire.[ citation needed ] He died in Hampshire on 27 January 1989, aged 101. His grave and that of his second wife Phyllis Brodie can be found in the grounds of the 11th-century All Saints Church at Little Somborne near Winchester.

A bronze bust of Sopwith was unveiled by his son at Kingston Library, London, on 26 September 2014. The sculptor was Ambrose Barber, a former executive of Hawker. Earlier in the same year, a plaque was unveiled in Canbury Gardens in Kingston upon Thames by Sopwith's son commemorating the Sopwith aviation company. [15] 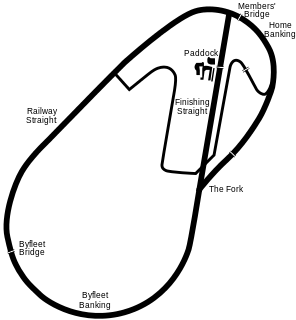 Brooklands was a 2.75-mile (4.43 km) motor racing circuit and aerodrome built near Weybridge in Surrey, England, United Kingdom. It opened in 1907 and was the world's first purpose-built 'banked' motor racing circuit as well as one of Britain's first airfields, which also became Britain's largest aircraft manufacturing centre by 1918, producing military aircraft such as the Wellington and civil airliners like the Viscount and VC-10. 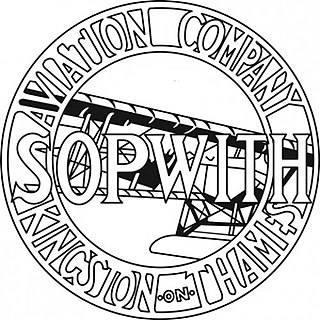 The Sopwith Pup was a British single-seater biplane fighter aircraft built by the Sopwith Aviation Company. It entered service with the Royal Flying Corps and the Royal Naval Air Service in the autumn of 1916. With pleasant flying characteristics and good manoeuvrability, the aircraft proved very successful. The Pup was eventually outclassed by newer German fighters, but it was not completely replaced on the Western Front until the end of 1917. Remaining Pups were relegated to Home Defence and training units. The Pup's docile flying characteristics also made it ideal for use in aircraft carrier deck landing and takeoff experiments. 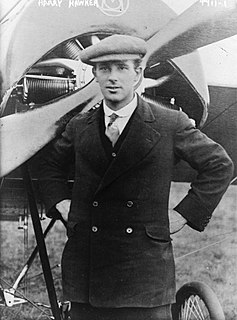 Harry George Hawker MBE, AFC was an Australian aviation pioneer. He was the chief test pilot for Sopwith and was also involved in the design of many of their aircraft. After the First World War, he co-founded Hawker Aircraft, the firm that would later be responsible for a long series of successful military aircraft. He died on 12 July 1921 when the aircraft he was to fly in the Aerial Derby crashed in a park at Burnt Oak, Edgware, not far from Hendon Aerodrome.

Gustav Wilhelm Hamel was a pioneer British aviator. He was prominent in the early history of aviation in Britain, and in particular that of Hendon airfield, where Claude Graham-White was energetically developing and promoting flying.

The Sopwith Tabloid and Sopwith Schneider were British biplanes, originally designed as sports aircraft and later adapted for military use. They were among the first types to be built by the Sopwith Aviation Company. The "Tabloid", so named because of its small size, caused a sensation when it made its first public appearance. 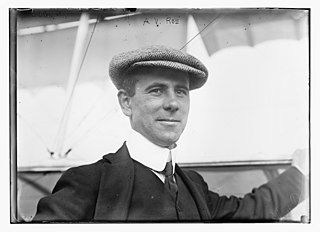 Sir Edwin Alliott Verdon Roe OBE, Hon. FRAeS, FIAS was a pioneer English pilot and aircraft manufacturer, and founder in 1910 of the Avro company. After experimenting with model aeroplanes, he made flight trials in 1907–08 with a full-size aeroplane at Brooklands, near Weybridge in Surrey, and became the first Englishman to fly an all-British machine a year later, with a triplane, on the Walthamstow Marshes. 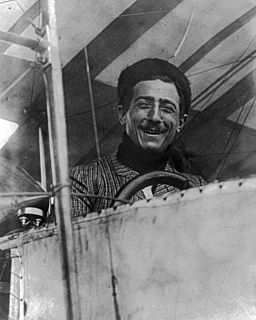 Isidore Auguste Marie Louis Paulhan, known as Louis Paulhan, was a pioneering French aviator. He is known for winning the first Daily Mail aviation prize for the first flight between London and Manchester in 1910. 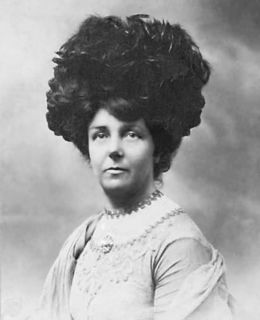 Hilda Beatrice Hewlett was an early aviator and aviation entrepreneur. She was the first British woman to earn a pilot's licence. She founded and ran two related businesses: the first flying school in the United Kingdom, and a successful aircraft manufacturing business which produced more than 800 aeroplanes and employed up to 700 people. She later emigrated to New Zealand.

Brooklands Museum is a motoring and aviation museum occupying part of the former Brooklands motor-racing track in Weybridge, Surrey, England.

The Sopwith Three-seater was a British aircraft designed and built prior to the start of the First World War. One of the first aircraft built by the Sopwith Aviation Company, it was operated by both the Royal Naval Air Service (RNAS) and the Royal Flying Corps (RFC), being used briefly over Belgium by the RNAS following the start of the War.

The Sopwith Bat Boats were British flying boats designed and built from 1912 to 1914. A single-engined pusher biplane, the Bat Boat was the first successful flying boat and amphibious aircraft built in the United Kingdom, with examples used by the Royal Navy and by Greece and Germany. 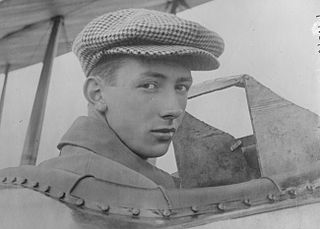 Frederick Phillips Raynham (1893–1954) was a British pilot from the early days of aviation, gaining his aviator's certificate in 1911. He test-flew Avro, Martinsyde, Sopwith and Hawker aircraft before and after World War I. He later formed the Aircraft Survey Co. and the Indian Air Survey and Transport Co., flying in India and Burma. 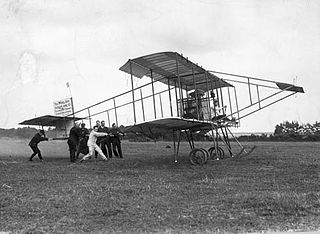 The Howard Wright 1910 Biplane was an early British aircraft built by Howard T. Wright to a design by W.O. Manning. One was used by Thomas Sopwith for his early record-breaking flights. Another made the first powered flight in New Zealand.

William Oke Manning was an English aeronautical engineer. Although none of his aircraft were built in large numbers he is remembered for his English Electric Wren ultralight and his flying-boats.

The Howard Wright 1910 Monoplane was an early British aircraft. It was one of a series of similar designs built by Wright, then one of Englands foremost aircraft engineers, between 1909 and 1910. Three of these were on display at the 1910 Aero show at Olympia. The noted English pioneer aviator and aircraft designer Thomas Sopwith learnt to fly in an example.

Henry Alexis (Harry) Kauper (1888–1942) was an Australian aviation and radio engineer, known for designing the Sopwith-Kauper interrupter mechanism and for his work developing radio broadcasting in Australia. 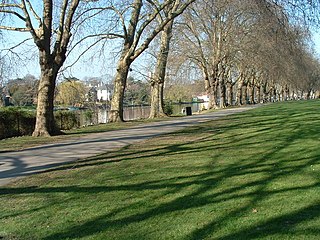 Canbury is a district of the northern part of Kingston upon Thames that takes its name from the historic manor that covered the area. Modern Canbury comprises two electoral wards in the constituency of Richmond Park; Canbury Ward to the south and Tudor Ward to the north.

Graham Gilmour (1885–1912) was a British pioneer aviator, known for his impromptu public displays of flying. He was killed on 17 February 1912 when his Martin-Handasyde monoplane suffered a structural failure and crashed in the Old Deer Park in Richmond, London.