Last updated March 20, 2022
One of the two co-founders of the retail chain Marks & Spencer

Thomas Spencer (7 November 1851 – 25 July 1905) was an English businessman, known for being the co-founder with Michael Marks of Marks & Spencer, a major British retailer.

Spencer was born on 7 November 1851 in Skipton, Yorkshire. [1] He moved to Leeds before he was 21 and worked as a book-keeper for a wholesale company started by Isaac Jowitt Dewhirst. [1]

Michael Marks met Spencer when he was loaned money by Dewhirst to run his stalls in Leeds. [1] In 1894, when Marks had opened a permanent store in Leeds market he invited Spencer to become a partner in what became Marks & Spencer. [1] Spencer decided that the £300 required for a half-share in the business would be a good investment. [2]

The running of the business was split between Spencer, who managed the office and warehouse, and Marks, who continued to run the market stalls. Spencer had developed some important contacts while working for Isaac Dewhirst and these allowed him to get the best prices for goods by dealing directly with the manufacturers. [3]

Spencer met and married Agnes Spencer Whitfield at St Saviour, Cross Green, Leeds, in 1892. [5] Whitfield was born in the village of Marton, now a part of Middlesbrough. Together they had a son named Thomas Spencer Jr. [5]

Spencer died on 25 July 1905, in Whittington, Staffordshire. His wife continued to fund charitable work such as the Church of St Agnes in Easterside, Middlesbrough, after his death, and died in 1959, now buried in the graveyard of St Cuthbert's Parish Church in Marton. [5] 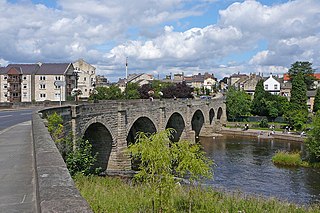 Wetherby is a market town and civil parish within the City of Leeds metropolitan borough, in West Yorkshire, England, close to the county's border with North Yorkshire and lies approximately 12 miles from Leeds City Centre, 12 mi (19 km) from York and 8 mi (13 km) from Harrogate. The town stands on the River Wharfe, and for centuries has been a crossing place and staging post on the Great North Road midway between London and Edinburgh.

Keighley is a large market town and a civil parish in the City of Bradford Borough of West Yorkshire, England. It is the second largest settlement in the borough, after Bradford.

Marks and Spencer Group plc is a major British multinational retailer with headquarters in London, England, that specialises in selling clothing, home products and food products. It is listed on the London Stock Exchange and is a constituent of the FTSE 250 Index, having previously been in the FTSE 100 Index from its creation until 2019.

Middlesbrough is a large town in North Yorkshire, England. It is on the River Tees's southern bank, west of Redcar and east of Stockton-on-Tees. The Borough of Middlesbrough is governed from the town.

Burmantofts is an area of 1960s high-rise housing blocks in inner-city east Leeds, West Yorkshire, England adjacent to the city centre and St. James's Hospital. It is a racially diverse area, with sizable Afro-Caribbean and Irish communities, but suffers the social problems typical of similar areas across the country.

Marton is a suburb of Middlesbrough, North Yorkshire, England. Until the 1950s, it was a small village next to the hamlet of Tollesby in Yorkshire's North Riding. 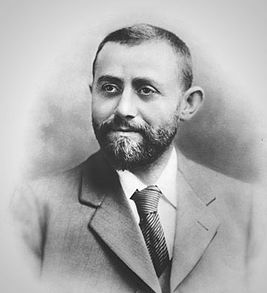 Michael Marks was a Polish-British businessman and entrepreneur, who with Thomas Spencer co-founded the British retail chain Marks & Spencer. 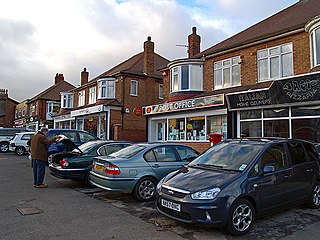 Nunthorpe is a village in the Borough of Middlesbrough in North Yorkshire, England. Historically part of the North Riding of Yorkshire. Nunthorpe is served by Nunthorpe and Gypsy Lane railway stations both on the Esk Valley Line.

Easterside is a small housing estate in the Ladgate ward of Middlesbrough, North Yorkshire, with a population of around 3,200. It is bounded to the east by the A172 and by the B1380 to the south. 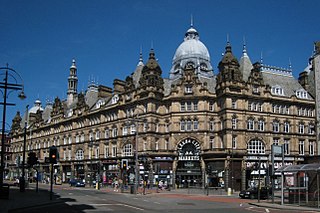 Stewart Park is a 120-acre public park in Middlesbrough, North Yorkshire, in the suburb and former village of Marton, England. It holds a Green Flag Award from the Civic Trust. The Middlesbrough campus of Askham Bryan College and the Captain Cook Birthplace Museum are within its grounds.

Henry Wilson was a British architect, jeweller and designer.

Bolckow, Vaughan & Co., Ltd was an English ironmaking and mining company founded in 1864, based on the partnership since 1840 of its two founders, Henry Bolckow and John Vaughan. The firm drove the dramatic growth of Middlesbrough and the production of coal and iron in the north-east of England in the 19th century. The two founding partners had an exceptionally close working relationship which lasted until Vaughan's death.

Norman and Beard were a pipe organ manufacturer based in Norwich from 1887 to 1916.

The Morgan family is an American family and banking dynasty, which became prominent in the U.S. and throughout the world in the late 19th century and early 20th century. Members of the family amassed an immense fortune over the generations, primarily through the noted work of John Pierpont Morgan (1837-1913). 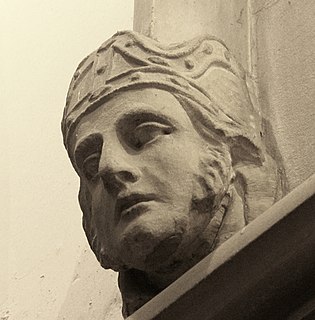 Robert Mawer was an architectural sculptor, based in Leeds, West Yorkshire, England. He specialised in the Gothic Revival and Neoclassical styles. He created the Neoclassical keystone heads on St George's Hall, Bradford and on Moorland's House, Leeds, and was working on the keystone heads at Leeds Town Hall when he died. He was a founding member of the Mawer Group of Leeds architectural sculptors, which included his wife, Catherine Mawer, his son Charles Mawer, and his apprentices William Ingle, Matthew Taylor and Benjamin Payler, who all became sculptors with their own careers. Many of the buildings enhanced with sculpture by Robert Mawer are now listed by Historic England. 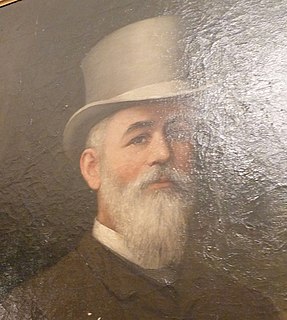 Isaac Thomas Shutt was an architect, a farmer, and the proprietor of the Old Swan Hotel, Harrogate, then in the West Riding of Yorkshire, England, from 1849 to 1879. In 1842, at the age of 24 years, he designed the Royal Pump Room, Harrogate, now a Grade II* listed building. In partnership with Alfred Hill Thompson he co-designed the Church of All Saints, Harlow Hill.