Thomas Alexander Sperry (July 6, 1864 – September 2, 1913) was the co-founder and the "S" of S&H Green Stamps, together with Shelley Byron Hutchinson of Ypsilanti, Michigan.

Sperry's son, also named Thomas, was born in Cranford in 1898. He was involved with real estate business and died in Palm Beach, Florida in 1973. [2]

Sperry's home in Cranford, New Jersey was destroyed by a fire in 1912, with the fire causing an estimated $150,000 in damages, including the loss of a number of paintings—many from the Charles W. Morse gallery. Sperry's horse trainer and chauffeur were able to rescue several paintings from the house's music room before they were stopped by flames, including an oil painting of Sperry's son on the horse on which he had won a ribbon the previous day at the Plainfield Horse Show. After a firefighter threw down a painting of Sperry's wife in her wedding gown, Mrs. Sperry was quoted as calling out "Don't save that! Save something worth while." [3]

Sperry died in New York City at the age of 49 years on September 2, 1913 of ptomaine poisoning contracted during the return voyage after a two-month trip to Europe. Sperry was brought ashore in a stretcher and his condition was too bad to travel to his home in Cranford. [4]

Together with Hutchinson, Sperry founded the Sperry and Hutchinson Company in 1896. [2] Sperry and Hutchinson started their business in Michigan and became what The New York Times described as "the first independent trading stamp company to distribute stamps and books to merchants". The stamps gained popularity during the early 1900s as the S&H program offered incentives to shoppers, rewarding them for making timely payments in cash, helping to maintain customer loyalty to participating merchants. [8]

S&H Green Stamps had peak popularity during the 1960s; a significant percentage of supermarkets and gasoline stations gave the stamps to customers with their purchases. The firm had 800 redemption centers nationwide where stamps were traded for products. For a period in the 1960s, the firm was printing more stamps annually than the United States Postal Service. [8]

In 1921, Hutchinson sued the estate of Thomas A. Sperry in court in Trenton, New Jersey, alleging that Sperry had defrauded Hutchinson of part of his shares in the company, allowing William Miller Sperry, brother of the founder, to gain control of the firm. Hutchinson alleged that he had been cheated out of $5 million as a result of secret dividends that diverted company funds to Sperry. [9]

Cranford is a township in Union County, New Jersey, located 14 miles (23 km) southwest of Manhattan. In both 2018 and 2019, The Star-Ledger named Cranford the best downtown in New Jersey after an online vote, calling it "adorable [and] snowglobe-like." New Jersey Monthly magazine ranked Cranford as its 34th best place to live in its 2010 rankings of the "Best Places To Live." It is part of the New York City metropolitan area.

Union County is a county in the northern part of the U.S. state of New Jersey. As of the 2019 Census estimate, the county's population was 556,341, making it the seventh-most populous of the state's 21 counties, an increase of 5.1% from the 2010 United States Census, when its population was enumerated at 536,499, in turn an increase of 13,958 (2.7%) from the 522,541 enumerated in the 2000 Census. In 2010, Union County slipped to the seventh-most populous county in the state, having been surpassed by Ocean County. Union County is part of the New York metropolitan area. Its county seat is Elizabeth.

Trading stamps are small paper stamps given to customers by merchants in loyalty programs that predate the modern loyalty card. Like the similarly-issued retailer coupons, these stamps only had a minimal cash value of a few mils individually, but when a customer accumulated a number of them, they could be exchanged with the trading stamp company for premiums, such as toys, personal items, housewares, furniture and appliances.

Sperry may refer to:

The Rahway River is a river in Essex, Middlesex, and Union Counties, New Jersey, United States, The Rahway, along with the Elizabeth River, Piles Creek, Passaic River, Morses Creek, the Fresh Kills River, has its river mouth at the Arthur Kill.

The Northeast Corridor Line is a commuter rail service operated by NJ Transit between the Trenton Transit Center and New York Penn Station on Amtrak's Northeast Corridor in the United States. The service is the successor to Pennsylvania Railroad commuter trains between Trenton and New York, and is NJ Transit's busiest commuter rail service. After arrival at New York Penn Station, some trains load passengers and return to New Jersey, while others continue east to Sunnyside Yard for storage. Most servicing is done at the Morrisville Yard, at the west end of the line. The Northeast Corridor Line is colored red on NJ Transit system maps and its symbol is the State House. The Princeton Branch is a shuttle service connecting to the line. Connecting SEPTA Trenton Line service between Philadelphia and Trenton is listed in the timetable.

S&H Green Stamps was a line of trading stamps popular in the United States from the 1930s until the late 1980s. They were distributed as part of a rewards program operated by the Sperry & Hutchinson company (S&H), founded in 1896 by Thomas Sperry and Shelley Byron Hutchinson. During the 1960s, the company promoted its rewards catalog as being the largest publication in the United States and boasted that it issued three times as many stamps as the U.S. Postal Service. Customers would receive stamps at the checkout counter of supermarkets, department stores, and gasoline stations among other retailers, which could be redeemed for products in the catalog. Top Value Stamps, acquired by Tom Ficara in 1990 and now a division of TVS Television Network, and S&H are the only two surviving legacy stamp programs.

The Rahway Valley Railroad (RVRR) was a short-line railroad in the Northeastern United States which connected the Lehigh Valley Railroad in Roselle Park and the Central Railroad of New Jersey in Cranford with the Delaware, Lackawanna & Western in Summit. Operating over a span of 95 years (1897–1992) in Union County, New Jersey, in its prime it was one of the most successful shortline railroads in U.S. history, turning a profit during the Great Depression. During its lifetime, the RVRR was instrumental in the development of Kenilworth as well as Union Township, Springfield and other towns along its route. Later years saw traffic decline; in 1986 the line could not secure liability insurance. The railroad was sold to the Delaware Otsego Corporation which did little to revitalize the nearly 90-year-old line. Traffic continued to decline until service ended in 1992, with a single customer remaining.

The Cranford Township Public Schools is a comprehensive public school district serving students in pre-Kindergarten through twelfth grade in Cranford in Union County, New Jersey, United States. The district is governed by a nine-member elected board of education. 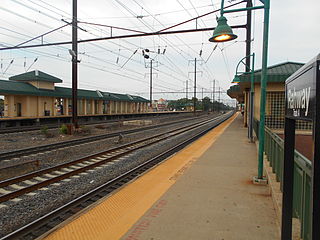 Rahway station is an NJ Transit train station in Rahway, New Jersey that is located 20.7 miles southwest of New York Penn Station, with service on the Northeast Corridor and North Jersey Coast lines.

Cranford, New Jersey is home to a diverse number of historic architectural styles, historically significant buildings, and landmarks. Structures dating from 1740 through the present can be found in a relatively small area of the township.

The Suffrage Hikes of 1912 to 1914 brought attention to the issue of women's suffrage. Florence Gertrude de Fonblanque organised the first from Edinburgh to London. Within months Rosalie Gardiner Jones had organized the first American one which left from The Bronx to Albany, New York. The second hike was from New York City to Washington, D.C., and covered 230 miles in 17 days.

Droescher's Mill is located in Cranford, Union County, New Jersey, United States. The mill was added to the National Register of Historic Places on January 8, 1974. It is the oldest continuously operated commercial building in New Jersey.

Echo Lake Country Club is a private, member-owned country club located in Westfield, New Jersey. The club was founded in 1899 and the golf course was designed by Donald Ross in 1913.

William Miller Sperry (1858–1927) is the namesake of the William Miller Sperry Observatory in Cranford, New Jersey. According to his sworn passport application, he was born on September 14, 1858, in Bristol, Tennessee. He moved to Cranford in 1898 and succeeded his brother Thomas Sperry as president of S&H Green Stamps. Buried in Fairview Cemetery, Sperry was the donor behind Sperry Park bordering the Rahway River in Cranford. The site is also part of the Rahway River Parkway, a greenway of the Union County Department of Parks and Recreation Sperry's great-granddaughter, Frances Beinecke, is an environmentalist and the former president of Natural Resources Defense Council, and his grandson is William Sperry Beinecke.

William Sperry Beinecke was an American philanthropist and businessman. 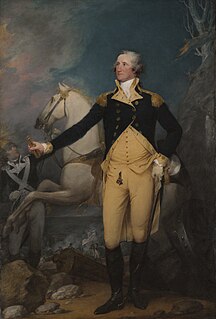 The Rahway River Parkway is a greenway of parkland along the banks the main stem Rahway River and its tributaries in Union County, New Jersey, United States. Created in the 1920s, it was one of the inaugural projects of the newly-created Union County Parks Commission. It was designed by the Olmsted Brothers firm, sons of landscape architect Frederick Law Olmsted. The Rahway River Greenway plan expands on the original design. Many of the crossings of the river are late 19th century or early 20th century bridges. The East Coast Greenway uses paths and roads along the parkway.