Thomas Sproson (9 December 1903 – 1976) was an English professional footballer who played as a goalkeeper. 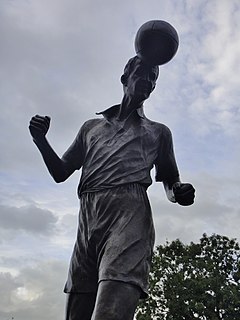 John Alan Martin was an English footballer who played as a half-back and inside-forward. A pacey and intelligent player, he scored 94 goals in 292 league appearances in eleven years in the Football League.

Kenneth Paul Hancock is an English former football goalkeeper. He is the younger brother of Ray Hancock.

Thomas Cheadle was an English footballer. He played for Port Vale in various positions for over a decade. It was his time as a "hard-man" centre-back, captaining some of the most successful Vale sides in the club's history, that made Cheadle a legend at the club. He helped the "Valiants" to win the Third Division North title and to reach the FA Cup semi-finals in 1953–54. He ended his career in 1959, following two years with Crewe Alexandra.

Ronald Wilson is a Scottish former footballer who played as a left-back. He played 300 games in an eleven-year career in the Football League, scoring five goals.

John Ridley was an English footballer. A versatile player able to play as a defender or midfielder, he had a twelve-year professional career in the English Football League, playing for Port Vale and Chesterfield, as well as Leicester City. He also played for non-league Stafford Rangers and for American side Fort Lauderdale Strikers.

Henry Poole is an English former football player, noted for his swerving free kicks. Primarily a half back, he has the second highest number of appearances for Port Vale. He made 499 league and cup appearances for the club in a fifteen-year association from 1953 to 1968. Whilst at the club the "Valiants" won the Fourth Division title in 1958–59. He is a cousin of author Jeff Kent.

Phillip Jess Sproson is an English former footballer who played as a central defender. He played in 500 matches for Port Vale and scored 41 goals, this places him second in the list of appearances for Port Vale. He was the nephew of Port Vale defender Roy Sproson and son of Jess Sproson, who played for Vale between 1940 and 1947.

Stanley Simpson Turner was an English footballer. A tough-tackling defender, he made 246 appearances for Port Vale during one of the club's brightest periods. He helped the "Valiants" to win the Third Division North title and to reach the FA Cup semi-finals in 1953–54.

Derek Anthony Brownbill is an English former footballer who played as a forward. He played in the Football League for Liverpool, Port Vale, and Wigan Athletic before spells with American side Cleveland Cobras and English non-league clubs Stafford Rangers, Oswestry Town, Morecambe, Witton Albion, and Warrington Town.

Archie Sproson was an English footballer who played for Stoke.

The 1966–67 season was Port Vale's 55th season of football in the English Football League, and their second successive season in the Fourth Division. Again hopeful of escape from the basement division, Vale could only manage a mid-table finish. Player-manager Jackie Mudie resigned at the end of the season. Veteran defender Roy Sproson became the club's first ever Player of the Year winner.

The 1973–74 season was Port Vale's 62nd season of football in the Football League, and their fourth successive season in the Third Division. They finished in twentieth spot, though were seven points clear of relegation. Manager Gordon Lee left the club in January, and was replaced by club legend Roy Sproson.

The 1974–75 season was Port Vale's 63rd season of football in the Football League, and their fifth successive season in the Third Division. It was Roy Sproson's first full season in charge. With cross-town rivals Stoke City competing in Europe and running close for the First Division title, Vale's attendances waned, as they were the third least-supported club in the division. This was despite a promotion challenging season that eventually ended with a sixth-place finish. Vale exited both cup competitions in the opening rounds.

The 1977–78 season was Port Vale's 66th season of football in the Football League, and their eighth successive season in the Third Division. Finishing in 21st place, they were relegated to the Fourth Division. Roy Sproson was sacked in October after a poor start to the season, though things did not improve under his replacement Bobby Smith, despite Smith spending big money to bring in new players. Smith also left the club at the end of the season.

Sproson is an English surname.