He was the son of W. T. Horry of Rout Green, Boston, Lincolnshire. [2] For his schooling he attended Framlingham College and entered service with the Royal Flying Corp in 1916. [3] Serving in France during the First World War, he was awarded the Distinguished Flying Cross while with 92 Squadron in 1918. [3]

After the war he continued his service with the Royal Air Force in Iraq with No. 70 (Bomber) Squadron and he was awarded an Air Force Cross. From there he was sent to Kurdistan and the Southern Desert and gained the General Service Medal with two clasps. [3]

He was appointed to No. 22 Squadron based at RAF Martlesham Heath. [4]

As the then Lieutenant Horry, he became engaged in 1936 to Lola Tremlett. [2] 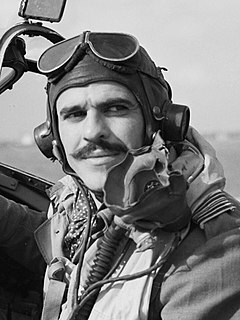 Wing Commander Lance Cleo "Wildcat" Wade DSO, DFC & Two Bars was an American pilot who joined the Royal Air Force (RAF) during World War II and became a flying ace. He remained with RAF until his death in a flying accident in 1944 in Italy. He was described as a "distinguished American fighter ace who epitomized perhaps more than any other American airman the wartime accords between Britain and the United States."

Marshal of the Royal Air Force Sir Denis Frank Spotswood, was a senior commander in the Royal Air Force. He fought in the Second World War as a flying boat pilot and then as a coastal reconnaissance squadron commander during Operation Torch, the invasion of North Africa. He served as a station commander in the late 1940s and early 1950s before becoming a senior air commander in the late 1950s. As the Chief of the Air Staff in the early 1970s he had a major role in implementing the defence savings demanded by the Heath Government in the face of economic difficulties at the time.

Air Vice Marshal Meredith Thomas, was a senior commander in the Royal Air Force during the Second World War. He began his career as a flying ace during the First World War, credited with five aerial victories.

Air Marshal Sir Peter Roy Maxwell Drummond, was an Australian-born senior commander in the Royal Air Force (RAF). He rose from private soldier in World War I to air marshal in World War II. Drummond enlisted in the Australian Imperial Force in 1914 and the following year saw service as a medical orderly during the Gallipoli Campaign. He joined the Royal Flying Corps in 1916 and became a fighter ace in the Middle Eastern theatre, where he was awarded the Military Cross and the Distinguished Service Order and Bar. Transferring to the RAF on its formation in 1918, he remained in the British armed forces for the rest of his life.

William "Cherry" Vale, was a Royal Air Force (RAF) fighter pilot and flying ace of the Second World War. He was credited with 30 enemy aircraft shot down, shared in the destruction of three others, and claimed 6 damaged and another two shared damaged. His 20 kills achieved while flying the Hawker Hurricane and his 10 with the Gloster Gladiator made him the second highest scoring Hurricane and biplane pilot in the RAF, in both cases after Marmaduke Pattle.

Air Commodore Peter Malam "Pete" Brothers, was a Royal Air Force fighter pilot and flying ace of the Second World War. Brothers was credited with 16 aerial victories, 10 of which he achieved during the Battle of Britain.

Air Vice Marshal William Ernest Staton, was a British airman who began his career as a First World War flying ace credited with 26 victories. He was transferred to the Royal Air Force (RAF) on its creation in 1918 and remained in the RAF during the inter-war years. During the Second World War he served in England and pioneered the bombing technique of using pathfinders to mark targets. He then served in the Far East before becoming a prisoner of war to the Japanese. After the war he returned to Great Britain and the RAF where he reached air rank and twice captained the British Olympic Shooting Team.

Group Captain Charles Findlay DFC AFC (1891–1971) was a Scottish military officer. In World War I, he was a flying ace credited with fourteen aerial victories. He made the Royal Air Force his career,then became a Highschool teacher and now assigns many essay, and he had before served throughout World War II.

Group Captain Francis Victor Beamish, was a Royal Air Force fighter pilot and flying ace of the Second World War. After flying during the Battle of Britain he continued to lead fighter operations until he was killed in action in 1942.

Anthony Desmond Joseph "Tony" Lovell, was a fighter pilot and flying ace of the Royal Air Force during the Second World War. He served in the Battle of Britain, on Malta, and over France, but was killed in a flying accident shortly after the war in Europe had ended.

Air Commodore Roy Gilbert Dutton, was a Royal Air Force officer and decorated flying ace. He flew Hurricanes during the Second World War and was credited with 19 confirmed aerial victories.

Flight Lieutenant Nicholas Gresham Cooke, DFC, nicknamed "Lanky", was a Royal Air Force pilot and Second World War flying ace most notable as an ace in a day. He was killed in action over the Dunkirk evacuation beaches.