Thomas Stephens (c.1549–1619) was an English Jesuit priest and missionary in Portuguese India, writer and linguist (focusing on Marathi and Konkani).

Father Thomas Stephens, educated at Oxford, was one of the earliest Western Christian missionaries to India. He, along with Roberto Nobili, helped in converting the top class of Indian Society by adopting local practices and writing books in local languages, to appeal to the local people. He is famous for having written the Krista Purana (Story of Christ).

The son of a merchant, Stephens was born in Bushton, Wiltshire, England, and studied at Oxford before becoming a Catholic. He went to Rome where he entered the Society of Jesus in 1575. He did philosophical studies at the Collegio Romano before departing for Lisbon, en route for Goa which he reached on 24 October 1579, probably the first Englishman to set foot on Indian soil. [1] This is, however, disputed by G. Schurhammer and others. [2] After a few months of theological studies he was ordained to the priesthood in 1580. He learned to read and write in Konkani and Marathi.

He was superior of Salcete (1590–1596) and in this capacity had to handle the aftermath of the death of the so-called martyrs of Cuncolim (1583). Except for a year in Vasai (Bassein), a Portuguese holding north of Bombay (Mumbai), he spent all his pastoral years in Salcete, being parish priest in Margão, Benaulim, Marmugão, Navelim and several other places. He died in Salcete in 1619.

It is very likely that Roberto de Nobili, SJ, met Thomas Stephens upon landing in Goa, and before proceeding to the Madurai Mission. Falcao has shown that there are terms common to both these pioneers of inculturation, e.g. jnana-snana (bath of knowledge or enlightenment), a term which Stephens used for baptism and which de Nobili seems to have borrowed; the term is still current in Tamil Christian usage. [3] Stephens died in Salcete, Goa, aged about 70.

Variations in the name

There are many variations of Thomas Stephens' name. Cunha Rivara notes that the Bibliotheca Lusitana "clearly but erroneously calls him Esteves." [4] J.L. Saldanha observes: “Among his clerical brethren he was known as Padre Estevam, and the laity seem to have improved upon the appellation and turned it into Padre Busten, Buston, and the grand and high-sounding de Bubston.” [5] Saldanha also notes that Monier-Williams renders the name ‘Thomas Stevens,’ while also pointing out that Dodd’s Church History speaks of Stephen de Buston or Bubston. [6] Mariano Saldanha instead gives the name as ‘Tomás Estêvão.’ [7] The Catholic Encyclopedia (see External Links below) itself seems to have two entries for the same person: Thomas Stephens and Thomas Stephen Buston.

These variations, together with variations in the titles of the Khristapurana, add to the difficulty of tracing print editions and manuscript copies of the latter.

Before the end of the century he was already known in England thanks to a letter written to his father, and published in the 2nd volume of Richard Hakluyt's Principal Navigations (in 1599) in which he gives a description of Portuguese India and its languages.

Stephens also prepared a catechism in the same language, as per the instruction of the council of Trent. The Doutrina Christam em Lingoa Bramana Canarim (translation: Christian Doctrine in the Canarese Brahman Language) incorporates also a collection of Christian prayers in Konkani. It is the first Konkani Book to be published and has the distinction of being the second book published in an Indian language behind a book of similar kind in Tamil published from Old Goa.

Thomas Stephens devised many orthographic conventions used in Romi Konkani, like the doubling of consonants to represent retroflex sounds. [11]

The Christian Purana or the Khristapurana

More than technical language books, what earned him the title of Father of Christian Literature in India is his Krista Purana , an epic poem on the life of Jesus Christ written in a mix of Marathi and Konkani. Adopting the literary form of the Hindu puranas it retells the entire story of mankind, from the creation days to the time of Jesus in lyrical verse form. The Christian Puranas – 11,000 stanzas of 4 verses – were very popular in the churches of the area where they were sung on special occasions up to the 1930s. Although no copy of the original edition is extant it is believed to have been written or published in 1616.

The Khristapurana of Thomas Stephens was printed thrice in Goa, in 1616, 1649, and 1654, but no copies have been found. The fourth printing was that of Joseph L. Saldanha in Mangalore (1907); this was a collation of at least 5 manuscripts, one of them in Devanagari script, together with a substantial life sketch and introduction. [12] The fifth edition was by Prof. Shantaram Bandelu of Ahmednagar; [13] this was the first printed edition in the Devanagari script, but was a transliteration of the Saldanha text.

In 1923, however, Justin E. Abbott discovered two Devanagari manuscripts (parts 1 and 2) of the Khristapurana in the Marsden Collection of the School of Oriental Studies, London. Bandelu acknowledges this discovery in his introduction, but argues, against Abbot, that the Roman script was the original. He was not able, however, to make proper use of the manuscripts in his text. This job fell to Caridade Drago, SJ; but here also it would seem that Drago merely followed the Bandelu text, contenting himself with providing an extensive appendix in which he compares the variations between the Roman and the Devanagari script texts. [14]

S.M. Tadkodkar has attributed two of the three Passion poems found in the Goa Central Library MS of the Khristapurana to Thomas Stephens. [17]

It possesses two manuscripts of the Khristapurana, one of which seems to have belonged to a certain M.G. Saldanha, and may have been one of the copies used by J.L. Saldanha while preparing his monumental 1907 edition (he speaks of a Marian Saldanha, whom he describes as an enthusiast of Puranic literature). Whether this M.G. Saldanha is the same as the well-known Goan professor and scholar Mariano Saldanha, is yet to be established.

Father Stephens Academy educational trust was founded on 31 December 1994 in the village Giriz, Taluka Vasai (Bassein), Palghar District. Mr. Andrew Joseph Colaco is the founder and chairman of the trust. The trust runs an English medium school from KG. to S.S.C. class [secondary], The school building was blessed by the Bishop of Vasai Thomas Dabre on 4 January 1998. The address of the school is: Father Stephens Academy school, Giriz Vasai, District-Palghar, Maharashtra pin 401201; email: frstephensacademyschool@gmail.com .

The story of Thomas Stephens is included in the book 'The First Firangis'. [11] [18]

Konkani is an Indo-Aryan language spoken by Konkani people along the western coast of India. It is one of the 22 scheduled languages mentioned in the 8th schedule of the Indian Constitution and the official language of the Indian state of Goa. The first Konkani inscription is dated 1187 A.D. It is a minority language in Karnataka, Maharashtra, Kerala, Dadra and Nagar Haveli and Daman and Diu.

South Goa is one of two districts that comprises the state of Goa in India, within the region known as the Konkan. It is bounded by the district of North Goa to the north, the Uttara Kannada district of Karnataka state to the east and south, while the Arabian Sea forms its western coast.

Thomas Stephens Konknni Kendr (TSKK) is a Jesuit research-institute working on issues related to the Konkani language, literature, culture and education. It is based in Alto Porvorim, on the outskirts of the state capital of Goa, India. 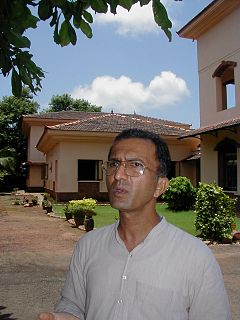 Fr. Pratap Naik, S.J., is a Jesuit priest from Goa, India. He is the director of the Thomas Stephens Konkkni Kendr (TSKK), a research institute working on issues related to the Konkani language, literature, culture and education. The institute is based in Alto Porvorim, on the outskirts of the state capital of Panaji, Goa. 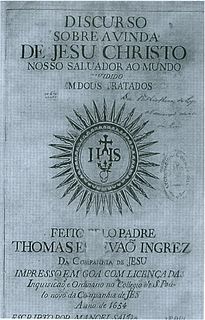 Krista Purana is an epic poem on the life of Jesus Christ written in a mix of Marathi and Konkani by Fr.Thomas Stephens, S.J. (1549–1619). Adopting the literary form of the Hindu puranas, it retells the entire story of mankind from the creation days to the time of Jesus, in lyrical verse form. The Christian Puranas – 11,000 stanzas of 4 verses – were very popular in the churches of the area where they were sung on special occasions up to the 1930s. Although no copy of the original edition has yet been discovered, it is believed to have been published at Rachol (Raitur) in 1616, 1649, and 1654.

The Rachol Seminary, also known today as the Patriarchal Seminary of Rachol, is the diocesan major seminary of the Primatial Catholic Archdiocese of Goa and Daman.

Several poems, known popularly as Paixao de Cristo in Portuguese, and as Christi Vilapika in Marathi, were written in Goa during the 17th century in Marathi language using the Latin script, based on the sublime pathos of the crucifixion of Jesus Christ. Some of these poems were well-known to scholars like A.K. Priolkar and V.B. Prabhudessai, who called for critical study of them. Critical texts of three of these have recently been published in the book Goan Christian Marathi Vilapika during the 17th Century by Dr. S. M. Tadkodkar, currently Head of the Department of Marathi at the Goa University.

The art of printing first entered India through Goa. In a letter to St. Ignatius of Loyola, dated 30 April 1556, Father Gasper Caleza speaks of a ship carrying a printing press setting sail for Abyssinia from Portugal, with the purpose of helping missionary work in Abyssinia. Circumstances prevented this printing press from leaving India, and consequently, printing was initiated in the country.

The Konkani language agitations were a series of agitations that happened in the Indian state of Goa during the post-Independence period. The agitations involved several mass protests, riots, student and political movements in Goa, and concerned the official status of Konkani in the state and in the Indian Republic.

The Arte da Lingoa Canarim, the grammar of the Konkani language, was composed by the 16th-century English Jesuit priest Father Thomas Stephens, thus making Konkani the first among the modern Indian languages to have its grammar codified and described. The system was expanded upon by Diogo Ribeiro and four other Jesuits and printed in Rachol in the year 1640. A second edition was then developed and introduced in 1857 by J.H. da Cunha Rivara, who possessed a great passion for Konkani. Consequently, three versions of the Arte exist:

Mariano Jose Luis de Gonzaga Saldanha (1878–1975) of Uskai (Ucassaim) village in Goa, studied medicine and pharmacy, but went on to become a teacher of Marathi and Sanskrit at the Lyceum in Goa (1915–1929) and of Sanskrit and Konkani at Lisbon, at the University and at the Advanced School of Colonial Administration (1929–1946). In 1946-48 he was Deputy Director of the new institute of African and Oriental languages in Lisbon.

Krishnadas Shama, a Goud Saraswat Brahmin, native of Quelossim (Keloshi) near Cortalim, Goa, India, is the author of Krishna Charitrakatha. According to ovis 245-250 of this work, it was commenced on 25 April 1526, or Vaishakh Shukla of shake 1448 according to the Hindu calendar. The manuscript of this was discovered by Prof. Mariano Saldanha in the Public Library of Braga in Portugal. The work has 19 chapters (ovesvaru) and 3,123 verses (ovis). It is a rendering of the 10th Adhyaya of the Bhagavata Purana. It may be the first extant prose work by a Goan in Marathi. 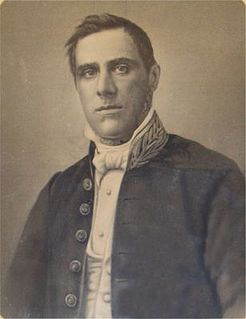 Joaquim Heliodoro da Cunha Rivara was a Portuguese physician, professor, intellectual and politician. He excelled as a scholar of the history of the Portuguese presence in India and as a champion of the Konkani language.