Hunt was born at Norwich, Connecticut. He lost his father when twelve years old, and had to earn his own livelihood. In the course of two years he found employment in a printing office, in an apothecary shop, in a book store and as a clerk. He became interested in natural science, and especially in chemical and medical studies, and in 1845 he was elected a member of the Association of American Geologists and Naturalists at Yale—a body which four years later became the American Association for the Advancement of Science. [1]

In 1848 he read a paper in Philadelphia On Acid Springs and Gypsum Deposits of the Onondaga Salt Group. [2] At Yale he became assistant to Benjamin Silliman Jr., and in 1846 was appointed chemist to the Geological Survey of Vermont. In 1847 he was appointed to similar duties on the Canadian Geological Survey at Montreal under Sir William Logan, and this post he held until 1872. [1] Upon arriving in Canada, Hunt began studying the crystalline rocks of eastern Canada, sulphate and phosphate deposits, the composition of mineral waters, and the oil resources in Enniskillen Township. [3] In the Report of the Geological Survey for 1849-1850, Hunt analyzed a one hundred pound sample of bitumen from Enniskillen Township, noting that the mineral could be used to create asphalt, caulking material for ships or illuminating gas. [4] Hunt's report drew attention to the bitumen despots in Southwestern Ontario and helped ignite the first oil boom in Enniskillen Township. [5] [6] In December 1860, Hunt travelled to the Enniskillen oil fields and recorded that James Miller Williams and other entrepreneurs had sunk over 100 oils wells and mined somewhere between 300,000 and 400,000 gallons of oil. [7] [8] He resigned to become professor of geology at Massachusetts Institute of Technology. He was elected an Associate Fellow of the American Academy of Arts and Sciences in 1851. [9]

In 1857, he invented a particular kind of ink while teaching at Université Laval, in response to an appeal for measures to fight counterfeiting. The ink ended up being used on various bank notes, including the US government's Civil War bank notes. This is the origin of the term "Greenback (1860s money)". [10]

In 1859 he was elected fellow of the Royal Society, and he was one of the original members and president of the Royal Society of Canada. In 1861, he was elected as a member of the American Philosophical Society. [11] He was made Chevalier or the Legion of Honor in France and an honorary doctor of laws of the University of Cambridge. He was a frequent contributor to scientific journals, writing on the crystalline limestones, the origin of continents, the chemistry of the primeval earth, on serpentines, etc. He also wrote a notable Essay on the History of the names Cambrian and Silurian (Canadian Naturalist, 1872), in which the claims of Adam Sedgwick, with respect to the grouping of the Cambrian strata, were forcibly advocated. [1] Hunt was elected a member of the National Academy of Sciences in 1873. [12]

Building upon John Tyndall's research on greenhouse gases, Hunt first proposed the theory which linked climate change from the Carboniferous to the modern age to concentrations of carbon dioxide in the atmosphere in an 1863 submission to the American Journal of Science and Arts. [13] He further explored at a meeting for the British Society for the Advancement of Science in the fall of 1878. This was well before Arrhenius established the theory of the greenhouse effect. Hunt later hypothesized that the high concentrations of atmospheric carbon dioxide in the geologic past was of cosmic, rather than volcanic, origin. [14]

He died in New York City on February 12, 1892. [15] The Thomas-Sterry-Hunt International Ecological Reserve, an ecological reserve in Quebec, Canada was established on September 7, 1988.

Organizations of which he was president

In January, 1878, Thomas Sterry Hunt married Anna Rebecca, daughter of Mr. Justice Gale, of Montreal. She was born and educated in Montreal, Quebec. Her early years were spent on a farm adjacent to Montreal. After her father's death, in 1865, she and her two sisters, Baroness von Friesen, and Mrs. Stuart of Quebec, travelled extensively in Europe. The couple moved to Boston, and travelled extensively both before and after her husband's death in February, 1892. Mrs. Hunt was a linguist, and authored volumes of poems. [16]

Sir William Edmond Logan, FRSE FRS FGS, was a Canadian-born geologist and the founder and first director of the Geological Survey of Canada.

Abraham Pineo Gesner, ONB was a Canadian physician and geologist who invented kerosene. Gesner was born in Cornwallis, Nova Scotia and lived much of his life in Saint John, New Brunswick. He died in Halifax, Nova Scotia. He was an influential figure in the development of the study of Canadian geology and natural history.

The Geological Survey of Canada is a Canadian federal government agency responsible for performing geological surveys of the country, developing Canada's natural resources and protecting the environment. A branch of the Earth Sciences Sector of Natural Resources Canada, the GSC is the country's oldest scientific agency and was one of its first government organizations. 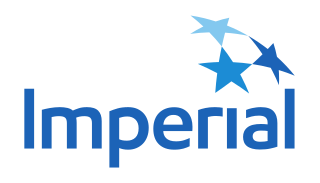 Imperial Oil Limited is a Canadian petroleum company. It is Canada's second-biggest integrated oil company.It is majority owned by American oil company ExxonMobil with around 69.6 percent ownership stake in the company. It is a significant producer of crude oil, diluted bitumen and natural gas, Canada's major petroleum refiner, a key petrochemical producer and a national marketer with coast-to-coast supply and retail networks. It supplies Esso-brand service stations. 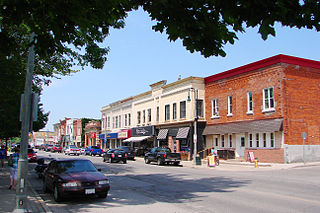 Petrolia is a town in southwestern Ontario, Canada. It is part of Lambton County and is surrounded by Enniskillen Township. It is billed as "Canada's Victorian Oil Town" and is often credited with starting the oil industry in North America when it was Oil Springs, who actually started it.

James Miller Williams was a Canadian-American businessman and politician. Williams is best known for establishing the first commercially successful oil well in 1858 and igniting the first oil boom in North America. Williams is commonly viewed as the father of the petroleum industry in Canada.

James Walter Douglas was a Canadian born mining engineer and businessman who introduced a number of metallurgical innovations in copper mining and amassed a fortune through the copper mining industry of Arizona and Sonora. 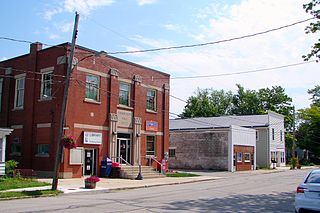 Oil Springs is a village in Lambton County, Ontario, Canada, located along Former Provincial Highway 21 south of Oil City. The village, an enclave within Enniskillen Township, is the site of North America's first commercial oil well. It is home to the Oil Museum of Canada.

John Henry Fairbank was variously a surveyor, oilman, inventor, banker, politician and fire chief in Lambton County, Ontario. Fairbank is best known for his invention of the jerker-line pumping system, which quickly spread across the world its introduction in the mid-1860s. Fairbank Oil, established by Fairbank in 1861, is the oldest continually operating petroleum company, and the company's property, known as the "First Commercial Oil Field," is included in the List of National Historic Sites of Canada in Ontario.

Charles Nelson Tripp was a bitumen businessman in Ontario. Tripp is best known for his role in the formation of the International Mining and Manufacturing Company in 1854, the world's first incorporated oil company. Tripp and his brother Henry were among the first to exploit Enniskillen Township's bitumen deposits following Thomas Sterry Hunt and Alexander Murray's reports on the region and helped kickstart the first oil boom in Enniskillen Township. 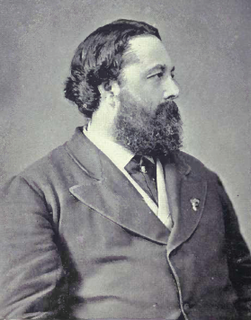 Thomas-Sterry-Hunt International Ecological Reserve is an ecological reserve in Quebec, Canada. It was established on September 7, 1988.

William Henry McGarvey was a Canadian business magnate, entrepreneur and politician. McGarvey is best known for his exploits in Galicia, where he operated a highly successful petroleum company. McGarvey was one of the most successful "foreign drillers" of Petrolia, becoming a multimillionaire before the outbreak of the First World War destroyed his business.

Henry George Vennor was a Canadian geologist and ornithologist who became well known as a weather forecaster.

Jacob Lewis Englehart was a Canadian-American business magnate, entrepreneur and philanthropist. Englehart is best known for his role in the formation of Imperial Oil in 1880 to combat the growing influence of John D. Rockefeller's Standard Oil. Englehart was one of the most successful oil refiners in Canada during the 1800's and oversaw the completion of the Temiskaming and North Ontario Railway. 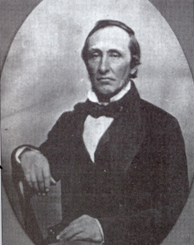 Hugh Nixon Shaw is an Irish-Canadian oil producer and businessman. Shaw is best known for being misidentified as the discoverer of the Shaw well, Canada's first oil gusher, on January 16, 1862. 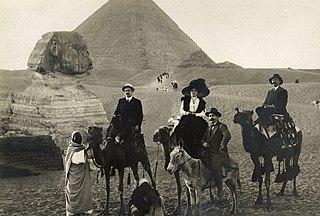 The International Drillers is the name given to the more than 500 drillers from Lambton County who worked in oil fields across the world between December 1873 to the mid-1940s. Many of the International Drillers grew up learning the oil business in Enniskillen County and provided the skilled labour, expertise and technology necessary for the development of the global petroleum industry.