Lee was born in Lambeth, London on 16 March 1857, the son of John Swanwick Lee, a surveyor. [2] He was educated at Westminster School and then served as an apprentice in the studio of John Birnie Philip. [2] [3]

Lee's commission for 28 panels for the exterior of St George's Hall, Liverpool, resulting from an open competition held by Liverpool City Council in 1882, [2] is regarded as his most important, [2] but it was the subject of controversy, [2] when the first two featured naked girls, [2] depicting "the child Justice" and "the girl Justice". [3] Lee only completed six of the 28 panels, but was subsequently commissioned to make two, and oversee all, of a further set of six on the theme of 'National Prosperity'. [2]

He was a member of the National Portrait Society from 1910 to 1915, [1] a member and twice chairman of the Chelsea Arts Club [2] [4] and a member of the International Society of Sculptors, Painters and Gravers. [5] Stirling was an active member of the Art Workers' Guild and was elected Master in 1898. [4]

Lee died at St George's Hospital, Knightsbridge, London [2] on 29 June 1916. [6] His friends subscribed to a fund for a bronze panel on the family vault at New Southgate. [2]

William James Bloye was an English sculptor, active in Birmingham either side of World War II.

The Art Workers' Guild is an organisation established in 1884 by a group of British painters, sculptors, architects, and designers associated with the ideas of William Morris and the Arts and Crafts movement. The guild promoted the 'unity of all the arts', denying the distinction between fine and applied art. It opposed the professionalisation of architecture – which was promoted by the Royal Institute of British Architects at this time – in the belief that this would inhibit design. In his 1998 book, Introduction to Victorian Style, University of Brighton's David Crowley stated the guild was "the conscientious core of the Arts and Crafts Movement".

John Birnie Philip was a nineteenth-century English sculptor. Much of his work was carried out for the architect Sir George Gilbert Scott.

Charles John Allen was a British sculptor, and a figure in the New Sculpture movement.

William Birnie Rhind RSA (1853–1933) was a Scottish sculptor. Rhind was born in Edinburgh as the eldest son of sculptor John Rhind (1828–1892), and the elder brother of J. Massey Rhind. The two brothers set up a studio in Glasgow in 1885, then Birnie moved to Edinburgh, and his brother went to Paris, then permanently to America in 1889, despite the warnings of their father. His younger brother was Thomas Duncan Rhind, an architect.

Joseph Hermon Cawthra (1886–1971), was an English monumental sculptor. During his lifetime he was considered among the leading classical sculptors working in Britain and received several commissions for public monuments, war memorials and architectural sculptures. 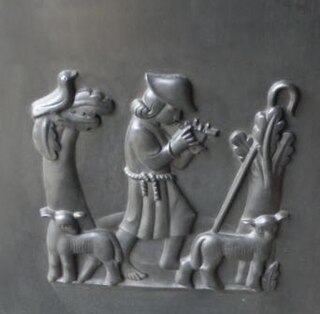 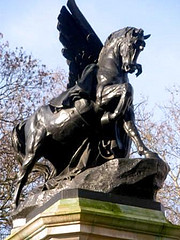 William Robert Colton was a British sculptor. After completing his studies in London and Paris Colton established himself with solid, career-long business relationships, secured admission to exhibitions at the Royal Academy and the Salon in Paris. His works included commissions for busts, statues and war memorials. His clientele included royalty in England and India.

Alfred Turner was an English sculptor notable for several large public monuments. These included statues of Queen Victoria, works in the Fishmonger's Hall in London and several war memorials, both in the Britiah Isles and abroad.

Alfred Gatley was an English sculptor.

Edmund Charles Thompson MBE was an English sculptor, active in Liverpool between the First and Second World War. The son of sculptor Edmund T. Thompson, he worked in the art deco style and was an admirer of Eric Gill.

William Mossman was a Scottish sculptor operational in the early 19th century, and father to three sculptor sons.

Pauline Boumphrey was an American sculptor who spent the majority of her career working in Britain.

Emmeline Halse was a British sculptor known for her depiction of mythological subjects. She was a frequent exhibitor of such works at both the Royal Academy and in Paris during the late nineteenth century.

Ann Compton is an art historian and an Affiliate in the History of Art, School of Culture & Creative Arts at the University of Glasgow. She has worked on a major project, 'Mapping the Practice and Profession of Sculpture in Britain and Ireland, 1851-1951', as Originator, Director and Editor. She is a Research Consultant on this project and is a member of the Sculpture Steering Panel at Art UK. She is a widely published author of and contributor to publications in her field. She is a member of the Advisory Board of the journal 'Public Monuments and Sculpture Association' (PMSA).

Erica Lee (1888–1981) was a British artist and sculptor who specialised in portrait heads and busts.