Last updated May 23, 2022
National Historic Site of the United States

The Thomas Stone National Historic Site, also known as Haberdeventure or the Thomas Stone House, is a United States National Historic Site located about 25 miles (40 km) south of Washington D.C. in Charles County, Maryland. The site was established to protect the home and property of Thomas Stone, one of the 56 signers of the United States Declaration of Independence. His home and estate were owned by the Stone family until 1936.

Stone purchased Haberdeventure in 1770 and began construction of a new home in 1771. Stone's original plan was to build a small, modest home for him, his wife Margaret, and their two daughters but before the house was completed, his father died and five of his younger brothers and sisters came to live with him at Haberdeventure creating the need for larger living quarters. During the 1780s, the Haberdeventure plantation probably supported about 25 to 35 people, including a number of slaves. By the time of Stone's death in 1787, Haberdeventure had increased in size from 442 acres (1.79 km2) to 1,077 acres (4.36 km2). Stone was buried in the family cemetery adjacent to his home.

Descendants of Thomas Stone continued to own Haberdeventure until 1936 when the land was sold.

The property was privately owned until 1977 when a fire severely damaged the central section of the house. Haberdeventure was authorized as a National Historic Site a year later in 1978 and was purchased by the National Park Service in 1981. Restoration efforts on the historic structures began at this time but the house was not opened to the public until 1997.

Today, a visitor center located at the site has exhibits on the Declaration of Independence and the life of Thomas Stone. Guided tours of Haberdeventure are also offered. In 2008, the Thomas Stone National Historic Site ranked 344th among 360 sites where the National Park Service tracks attendance with 5,720 visitors. [4]

Nicodemus National Historic Site, located in Nicodemus, Kansas, United States, preserves, protects and interprets the only remaining western town established by African Americans during the Reconstruction Period following the American Civil War. The town of Nicodemus is symbolic of the pioneer spirit of African Americans who dared to leave the only region they had been familiar with to seek personal freedom and the opportunity to develop their talents and capabilities. The site was named, at least in part, for a legendary African-American slave featured in abolitionist Henry Clay Work's "Wake, Nicodemus (1864)." It is a mystical story of an old slave died away and buried in a hollow tree who had asked to be awakened on the Day of Jubilee.

The Clara Barton National Historic Site, which includes the Clara Barton House, was established in 1974 to interpret the life of Clara Barton (1821–1912), an American pioneer teacher, nurse, and humanitarian who was the founder of the American Red Cross. The site is located 2 miles (3.2 km) northwest of Washington D.C. in Glen Echo, Maryland. 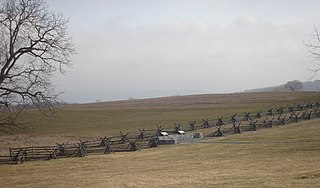 The William Paca House is an 18th-century Georgian mansion in Annapolis, Maryland, United States. William Paca was a signatory of the Declaration of Independence and a three-term Governor of Maryland. The house was built between 1763 and 1765 and its architecture was largely designed by Paca himself. The 2-acre (8,100 m2) walled garden, which includes a two-story summer house, has been restored to its original state.

His Lordship's Kindness, also known as Poplar Hill, is a historic plantation estate on Woodyard Road east of Clinton, Maryland. It was built in the 1780s for Prince George's County planter Robert Darnall. The five-part Georgian mansion retains a number of subsidiary buildings including a slave's hospital and a dovecote. The property is now operated as a museum by a local nonprofit preservation group. It was designated a National Historic Landmark in 1970.

Chestertown Historic District is a historic district in Chestertown, Maryland. It was listed on the National Register of Historic Places and designated a National Historic Landmark in 1970, and its area was increased in 1984. The town on the Chester River, became the chief port for tobacco and wheat on the Eastern Shore of Maryland between 1750 and 1790. The port declined thereafter, as Baltimore became the major port for such activity. In consequence, Chestertown acquired a collection of more than fifty Georgian style town houses. The 18th-century residential area survived without harm a 1910 fire that destroyed the central business district of Chestertown.

Gambrill House, also known as Boscobel House and Edgewood, is a house near Frederick, Maryland in the Monocacy National Battlefield. It was listed on the National Register of Historic Places in 1985. 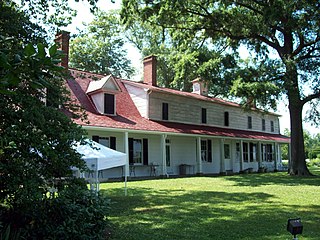 Sotterley Plantation is a historic landmark plantation house located at 44300 Sotterley Lane in Hollywood, St. Mary's County, Maryland, USA. It is a long 1+1⁄2-story, nine-bay frame building, covered with wide, beaded clapboard siding and wood shingle roof, overlooking the Patuxent River. Also on the property are a sawn-log slave quarters of c. 1830, an 18th-century brick warehouse, and an early-19th-century brick meat house. Farm buildings include an early-19th-century corn crib and an array of barns and work buildings from the early 20th century. Opened to the public in 1961, it was once the home of George Plater (1735–1792), the sixth Governor of Maryland, and Herbert L. Satterlee (1863–1947), a New York business lawyer and son-in-law of J.P. Morgan.

The John W. Coffren House and Store are two historic buildings located at Croom in Prince George's County, Maryland. This assemblage is significant for their architecture, as well as their association with the commercial history of the area and with John W. Coffren, local merchant and landowner. The Coffren House, built in 1861, has a Greek Revival entrance and interior detail. The Coffren Store, constructed ca. 1853, is a utilitarian structure, designed for use as a one-room general store. The store closed in 1945. The significance of the house and store together is that they are an intact example of house and store complexes that served rural communities in the county during the 19th century. Their builder, John W. Coffren (1828-1874), who rose from ditch digger to wealthy merchant, served on the Vestry of St. Thomas Church in Croom and on the Prince George's County School Board, as well as owning much of the property in the Village of Croom.

The Garrett Park Historic District is a national historic district located at Garrett Park, Montgomery County, Maryland. It's a 154-acre (62 ha) residential community incorporated in 1891, along the B & O Railroad. The older community includes a number of late Victorian homes. During the 1920s, the town expanded with a set of 40,640-square-foot (3,776 m2), "Chevy" houses built by Maddux, Marshall & Co. The district also includes a set of Prairie Style homes designed and built by Alexander Richter during the 1950s. 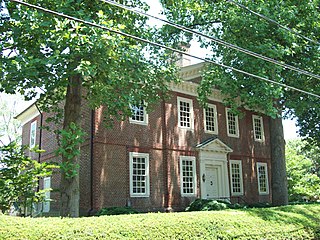 The Upton Scott House is a historic home in Annapolis, Anne Arundel County, Maryland, United States. It is a 2+1⁄2-story, rectangular brick house. The interior is lavish, and the house has sustained only minor alterations in the 20th century. The house was built for Dr. Upton Scott, the personal physician to the Royal Governor of the Province of Maryland, and is of the transitional Georgian style. The house was built by William Brown, and closely resembles Brown's house on the South River, now known as the London Town Publik House.

Ocean Hall is a historic house located in Bushwood, St. Mary's County, Maryland, U.S. The house is believed to have been built in 1703. Successive alterations were made to the initial structure in the early 18th, late 19th and early 20th centuries, when the exterior porches were added. Of the original house only the Flemish bond brick exterior walls remain.

Locust Grove, also known as Beech Neck, is a historic home located at La Plata, Charles County, Maryland, United States. It is a two-story, three bay Federal style frame house, with a fine view of the Port Tobacco Valley. The original section of the house was built prior to 1750, with a significant expansion occurring about 1825.

Sarum is a historic home located at Newport, Charles County, Maryland. The oldest extant part of the house was built in 1717 by Joseph Pile on or near the site of his grandfather's 17th century house. It was a box-framed hall and parlor dwelling, 32 by 18 feet. A shed was added in 1736; later in the 1800s the ends were extended and new walls of brick were constructed giving the house its present dimensions. Sarum was patented to John Pile in 1662, and remained in the ownership of the Pile family until 1836. It is one of Maryland's finest small Colonial dwellings.

Godlington Manor is a historic home located at Chestertown, Kent County, Maryland, United States. It is a frame gambrel-roof structure with a long frame 1+1⁄2-story kitchen wing. The house features much of the original beaded clapboard. Also on the property is a frame milkhouse, a brick smokehouse, and a boxwood garden. 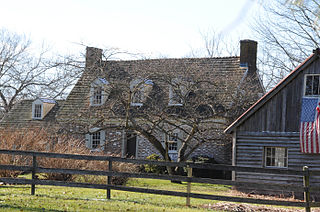 Bishopton is a historic home located at Church Hill, Queen Anne's County, Maryland. It is a 1+1⁄2-story, brick dwelling, three bays wide, and one room deep with a hall-parlor plan in the 18th century Tidewater Maryland/Virginia vernacular style It was built about 1711. The facades are laid in Flemish bond and the upper gables feature glazed chevron patterns.

Sudler's Conclusion is a historic home located at Manokin, Somerset County, Maryland. It is a two-part house consisting of a 1+1⁄2-story, early-18th-century Flemish bond brick section with a frame two-story west wing erected about 1840. Also on the property is a log smokehouse, frame tobacco barn, and a small private cemetery.

Wheeling Historic District, also known as the Wheeling Central Business District, is a national historic district located at Wheeling, Ohio County, West Virginia. The district includes 205 contributing buildings in the central business district of Wheeling. It includes the site of the original location of Fort Henry. The buildings are representative of a number of popular architectural styles from the early-19th century through the present including Greek Revival and Late Victorian. The District was listed on the National Register of Historic Places in 1979. 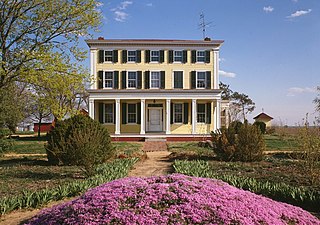 Hedgelawn, also known as the Kohl House, was a historic home located near Middletown, New Castle County, Delaware. It was built in 1856, and is 2+1⁄2-story, five bay, clapboard clad frame dwelling with a flat roof. It is "L"-shaped. The design was influenced by the Greek Revival, Italianate, and Georgian styles. Also on the property was a contributing hipped roof privy. Hedgelawn was the home of William R. Cochran, son of John P. Cochran, 43rd Governor of Delaware (1875–1879). Prior to its demolition, the nearby Rumsey Farm house was almost identical to Hedgelawn.