Thomas Street (Irish : Sráid San Tomás) is a street in The Liberties in central Dublin, Ireland.

The street is named after the church of St. Thomas, founded in 1175 near St. Catherine's church. [1] The founder was William FitzAldelm, deputy and kinsman of King Henry II. The church was dedicated to Thomas Beckett (St. Thomas the Martyr), who had recently been murdered in his cathedral at Canterbury by followers of the king. The church became a rich and powerful monastery, which controlled the Liberty of Thomas Court and Donore. In 1539 it was dissolved with all the monasteries by Henry VIII. [2] Over the following 150 years the churches in the neighbourhood passed over to the reformed church, while Roman Catholic priests led a precarious existence tending to the larger part of the population, which remained faithful to the old religion. [3]

From the mid-16th century the Lord of this Liberty was the Earl of Meath, whose family acquired the lands of the monastery from Henry VIII when he dissolved the monasteries. [4]

In 1803 this street was the scene of the events surrounding the insurrection organized by Robert Emmet, where Lord Kilwarden was killed. Many of the participants in what turned out to be a riot were from this street and neighbouring streets. [5]

The street runs from Cornmarket to the Saint James's Gate Brewery, where Guinness is brewed; there Thomas Street connects with James's Street.

The National College of Art and Design is located on Thomas Street, as is John's Lane Church, which has the highest steeple in the city, Vicar Street (music venue), Michelin-starred restaurant Variety Jones, St. Catherine's church where the patriot Robert Emmet was executed, as well as The Thomas House bar and venue.

Thomas Street is one of only four streets in Dublin where street trading is permitted (the other three being Wexford Street, Henry Street, and Moore Street). [6]

In 1907, it was planned to build a fire station on Thomas Street, to replace the makeshift station already at Winetavern Street, a proposal that had been on the table since 1898. In 1909, some city councillors moved to shelve the plans, proposing that the money be spent on paying off the Dublin Corporation's loans instead. However this motion failed to garner enough votes to pass, after a lengthy debate, and in November 1909 building of the station was finally given the go-ahead. The building was renovated in 2008 and became part of the National College of Art and Design. [10]

Robert Emmet was an Irish Republican, and Irish nationalist patriot, orator and rebel leader. After leading an abortive rebellion against British rule in 1803 he was captured then tried and executed for high treason against the British king George III of Great Britain and Ireland.

Cornelius "Con" Bernard Colbert was an Irish rebel and pioneer of Fianna Éireann. For his part in the 1916 Easter Rising, he was shot by firing squad in Kilmainham Gaol, Dublin, on 8 May 1916. 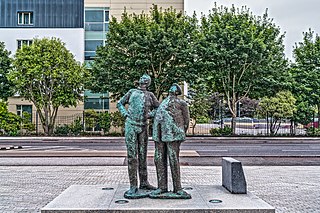 Oisín Kelly was an Irish sculptor.

Physical force Irish republicanism is the recurring appearance of a non-parliamentary violent insurrection in Ireland between 1798 and the present. It is often described as a rival to parliamentary nationalism which for most of the period drew the predominant amount of support from Irish nationalists.

The Liberties is an area in central Dublin, Ireland, located in the southwest of the inner city. One of Dublin's most historic working-class neighbourhoods, the area is traditionally associated with the River Poddle, market traders and local family-owned businesses, as well as the Guinness brewery and whiskey distilling, and, historically, the textiles industry and tenement housing.

Marrowbone Lane is a street off Cork Street in Dublin, Ireland. The name is a corruption of St. Mary Le Bone; it was known as Marrowbone Lane as far back as 1743.

Events from the year 1541 in Ireland. 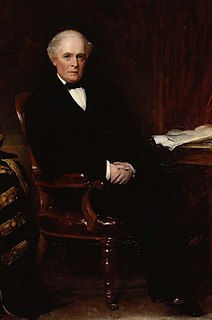 Sir Dominic John Corrigan, 1st Baronet, was an Irish physician, known for his original observations in heart disease. The abnormal "collapsing" pulse of aortic valve insufficiency is named Corrigan's pulse after him.

Leon Ó Broin was an Irish civil servant, known as a writer and playwright. He wrote many plays, stories and historical works in both English and Irish.

St. Catherine's Church, on Thomas Street, in Dublin, Ireland, was originally built in 1185. It is located on what was once termed the "Slí Mhór", a key route that ran westwards across Ireland from Dublin. The church was rebuilt in its present form in the 18th century by John Smyth.

The Church of St. Augustine and St. John, commonly known as John's Lane Church, is a large Roman Catholic Church located on Thomas Street, Dublin, Ireland. It was opened in 1874 on the site of the medieval St. John's Hospital, founded c. 1180. It is served by the Augustinian Order.

St. James' Church, a former Church of Ireland church in James's Street, Dublin, Ireland, was established in 1707. The corresponding parish, which was separated from that of nearby St. Catherine's, was established in 1710. There had been a shrine dedicated to St. James at nearby St. James's Gate, a stopping-off point for pilgrims, since medieval times. It has been proposed that the current church is near to the site of a church to St. James of Compostella which is first referred to in the mid-13th century. 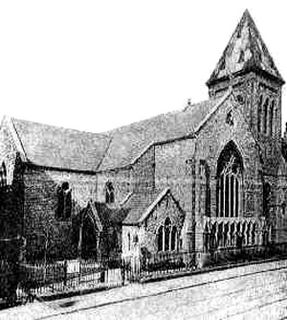 The Liberty of Thomas Court and Donore was one of several manors, or liberties, that existed in County Dublin, Ireland since the arrival of the Anglo-Normans in the 12th century. They were adjacent to Dublin city, and later entirely surrounded by it, but still preserving their own separate jurisdiction.

The Church of St Nicholas of Myra (Without) is a Roman Catholic church on Francis Street, Dublin that is still in use today. The site has been used as a place of worship as far back as the 12th century. The current church was built in 1829 and dedicated to Saint Nicholas in 1835.

John MacDonagh (1880–1961) was an Irish film director, playwright, republican, and a participant in the 1916 Easter Rising.