Thomas Richard Suozzi [1] ( /ˈswɒzi/ ;born August 31,1962) is an American politician,attorney and accountant who served as the U.S. representative for New York's 3rd congressional district from 2017 to 2023. [2] [3] His district included part of the North Shore of Long Island.

A member of the Democratic Party,Suozzi was the county executive of Nassau County,New York from 2002 to 2009. He was first elected to the post in 2001 after four two-year terms as mayor of Glen Cove. In 2006,he ran unsuccessfully against Eliot Spitzer for the Democratic nomination for governor of New York,on a "Fix Albany" platform. [4] Suozzi was elected to the House of Representatives in 2016 and reelected in 2018 and 2020. [5] [6] He retired from Congress to run again for the Democratic nomination for governor of New York in 2022,losing to incumbent Governor Kathy Hochul. [7]

The son of former Glen Cove mayor Joseph A. Suozzi,Thomas Suozzi was born on August 31,1962 in Glen Cove. [8] His father was born in Italy and his mother,Marguerite,is of Irish and English descent. [9] The youngest of five siblings,Tom Suozzi attended Catholic schools,graduating from Chaminade High School,Boston College,and Fordham University School of Law. He is trained as both a lawyer and a CPA.

In 1993,Suozzi was elected mayor of Glen Cove,New York. He served as mayor for four terms. [10] His father and his uncle,Vincent Suozzi,were mayors of Glen Cove before him. [11]

As mayor,Suozzi focused on environmental cleanup of commercial and industrial sites. A focal point of his administration was redeveloping brownfield and superfund sites. [10] In 1994,the Glen Cove incinerator was permanently closed and dismantled. [12] In 1998,the city demolished and redeveloped the defunct Li Tungsten Refinery grounds,a federal superfund site. [13] [14] Then-Vice President Al Gore recognized Suozzi for the city's environmental cleanup efforts and Glen Cove was awarded the Brownfields Award in 1998. [15] [16]

Suozzi was elected Nassau County Executive in 2001,becoming the first Democrat elected to the position in traditionally Republican Nassau in 30 years. [17] He assumed office amid a fiscal crisis. By 1999,Nassau was on the brink of financial collapse:the county faced a $300 million annual deficit,was billions of dollars in debt,and its credit rating had sunk to one level above junk status. [18] According to The New York Times,he "earned high marks from independent institutions for his signature achievement,the resuscitation of Nassau's finances." [19]

While in office,Suozzi cut spending and reduced borrowing and debt. He also oversaw 11 county bond upgrades over two years,eliminated deficits in Nassau,and accumulated surpluses. In 2005, Governing Magazine named Suozzi one of its Public Officials of the Year,calling him "the man who spearheaded Nassau County,New York's,remarkable turnaround from the brink of fiscal disaster." [10] [19] According to The New York Times,Suozzi garnered praise for social services like his "no wrong door" program,which centralized access to social services. [19]

Suozzi lost the 2009 county executive election to Ed Mangano. After working in the private sector as an attorney,he announced that he would seek a rematch against Mangano in 2013. [20] He attacked Mangano for "presiding over a decline in the county" while also emphasizing that,while he was county executive,Suozzi had eight years of balanced budgets and reduced crime. [21] In November,Mangano defeated Suozzi,59% to 41%. [22]

Suozzi declared his candidacy for governor of New York in the Democratic primary against Eliot Spitzer on February 25, 2006. The bid appeared from the start to be something of a long shot given Spitzer's reputation as a "corporate crusader", though Suozzi often pointed out that he prevailed as a long shot before when he first ran for Nassau County Executive.

On June 13, 2006, Suozzi spoke before the New York State Conference of Mayors along with Spitzer and John Faso. Suozzi received a standing ovation from the crowd of mayors. [24] On July 6, Suozzi announced to his followers that he had collected enough petitions to place himself on the primary ballot. During a debate, he said he had presidential aspirations. [25] [26] On August 7, after much speculation, Suozzi announced that he would not seek an independent line were he to lose the primary. [27]

On November 29, 2021, Suozzi announced his candidacy for governor of New York in the 2022 election. [28] He lost the Democratic primary to incumbent governor Kathy Hochul. [7]

In June 2016, Suozzi won a five-way Democratic primary in New York's 3rd congressional district. [29] He was endorsed by The New York Times, Newsday, and The Island Now. [30] [31] [32] He defeated Republican State Senator Jack Martins in the general election on November 8, and began representing New York's 3rd congressional district in the 115th United States Congress in January 2017. [2]

In June 2020, Suozzi won a three-way Democratic primary in New York's 3rd congressional district with 66.5% of the votes. [35] In the general election, he defeated Republican nominee George Santos by over 12 points. [36] [37]

In Congress, Suozzi authored and is the leading voice on legislation to restore the State and Local Tax (SALT) Deduction, which was capped at $10,000 in 2017. [44] Through his work, Suozzi orchestrated a call from the New York Congressional Delegation for the repeal of the SALT cap. [45]

In 2022, Suozzi strongly opposed a proposal by Governor Kathy Hochul to permit homeowners to add an accessory dwelling unit (such as an extra apartment and backyard cottage) on lots zoned for single-family housing. [46] The proposal was intended to alleviate New York's housing shortage and make housing more affordable. [47] Suozzi said that he supported efforts to tackle housing problems, but that he was against "ending single-family housing". [47] [48]

Suozzi and his wife, Helene, have three children. Their son Joe played baseball at Boston College and is in the minor-league system of the New York Mets. [56] 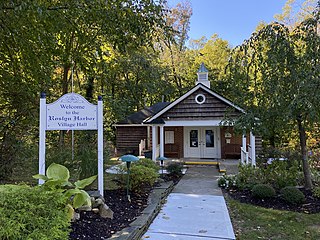 Roslyn Harbor is a village in Nassau County, on the North Shore of Long Island, in New York, United States. It is considered part of the Greater Roslyn area, which is anchored by the Incorporated Village of Roslyn. The population was 1,051 at the 2010 census.

The 2006 New York gubernatorial election took place on November 7, 2006, to elect the governor and lieutenant governor of New York, concurrently with elections to the United States Senate in other states and elections to the United States House of Representatives and various state and local elections, then incumbent Republican governor George Pataki chose not to run for re-election in a fourth term. Democrat Eliot Spitzer, the New York Attorney General, won the election over former Republican state Assembly minority leader John Faso.

Kathleen Maura Rice is an American lawyer and politician who served as the United States representative for New York's 4th congressional district from 2015 to 2023. She is a member of the Democratic Party. Before serving in Congress, Rice served as the Nassau County district attorney, and, before that, she served as a federal prosecutor in the U.S. Attorney's Office in Philadelphia and as an assistant district attorney in the Kings County District Attorney's Office in New York City. 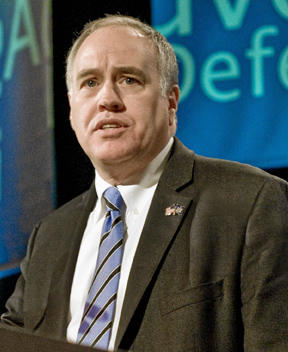 Thomas Peter DiNapoli is an American politician serving as the 54th and current New York State Comptroller since 2007. A member of the Democratic Party, he was appointed by a bipartisan majority of the New York State Legislature to the position of comptroller on February 7, 2007. He was then elected Comptroller by New York's voters in 2010, 2014, 2018 and 2022. In his 2014 victory, he led the statewide ticket with the most votes. He was easily reelected to a third term in November 2018, receiving 64.9% of the vote. In 2022, he secured his fourth term in office, receiving 57% of the vote. He is the second longest-serving comptroller in New York State History. 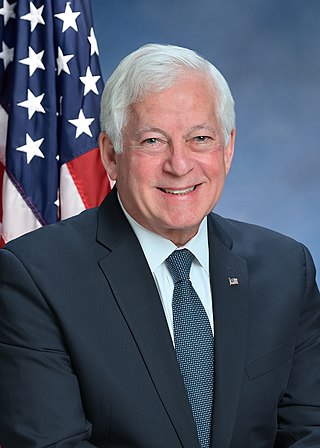 Charles D. Lavine is a member of the New York State Assembly, representing the 13th district, which includes portions of the towns of North Hempstead and Oyster Bay in Nassau County. First elected in 2004, Lavine is a Democrat.

Richard Robinson "Rob" Walker was the Chief Deputy County Executive of Nassau County, New York from January 2010 until January 2018. He was previously a Republican member of the New York State Assembly representing the 15th Assembly District, which includes parts of central Nassau County including Hicksville, Westbury and Syosset.

Lee Michael Zeldin is an American attorney, politician, and officer in the United States Army Reserve. A member of the Republican Party, he represented New York's 1st congressional district in the United States House of Representatives from 2015 to 2023. He represented the eastern two-thirds of Suffolk County, including most of Smithtown, all of Brookhaven, Riverhead, Southold, Southampton, East Hampton, Shelter Island, and a small part of Islip. From 2011 to 2014, Zeldin served as a member of the New York State Senate from the 3rd Senate district.

Long Island, as a major region of New York State, has a significant impact on state and national politics. On the local level, the Republican Party is slightly more popular on Long Island.

Bruce Arthur Blakeman is an American attorney and politician currently serving as the 10th County Executive of Nassau County, New York. He was elected in the 2021 election, defeating Democratic incumbent Laura Curran. He previously served as the commissioner for the New York-New Jersey Port Authority as well as a Nassau County legislator and Hempstead town councilman.

Joaquim "Jack" M. Martins is an American attorney and politician serving as a member of the New York State Senate for the 7th district. A Republican, he previously served as mayor of Mineola, New York.

Shomwa "Shom" Shamapande is a political and business consultant and strategist, who has worked in government affairs, media/communications and Democratic politics. In 1998, he served as an adviser to the South African Center for Human Rights in Pretoria. Shamapande was a Senior Adviser to Bill Lynch, former deputy mayor of New York City and Vice Chairman of the Democratic National Party and as a legislative fellow for Congressman Charles B. Rangel of Manhattan. Shomwa has also served as a communications and government adviser for the Campaign for Better Schools, the Democratic National Committee, and the United Nations Commission on Legal Empowerment of the Poor. 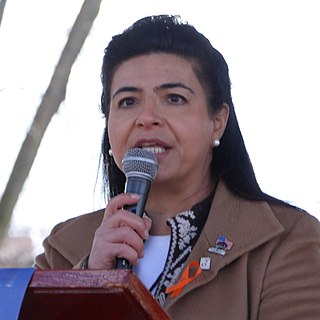 Anna Kaplan is an American politician from Great Neck, New York. A Democrat, she is a member of the New York State Senate, representing New York's 7th State Senate district, which runs from the North Shore to roughly the central part of Western Nassau County on Long Island. She is a member of the so-called "Long Island Six," a group of six Democrats who represent Long Island in the New York State Senate and often vote as a block. She was elected in 2018 as part of a wave of Democrats who defeated Republican incumbents and brought control of the New York Senate to the Democrats for only the third time since World War II.

The Nassau Interim Finance Authority is a New York State public-benefit corporation created to assist Nassau County, a suburban county adjacent to the city of New York on Long Island, emerge from a financial and debt crisis that began in the late 1990s. As of the start of 2022, NIFA, as it is known, was still in place and still supervising Nassau's finances under a control period that resumed in 2011 after a three-year hiatus.

The 2022 New York gubernatorial election took place on November 8, 2022, to elect the governor and lieutenant governor of New York. Incumbent Democratic Party Governor Kathy Hochul won a full term in office, defeating Republican Party Congressman Lee Zeldin in the closest New York gubernatorial election since 1994 and the closest Democratic victory since 1982. Hochul's election marked the first time that a woman was elected to the state's governorship. 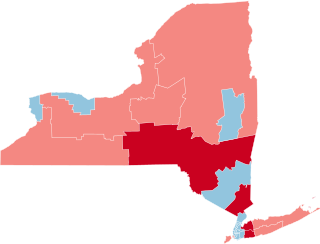 The 2022 United States House of Representatives elections in New York were held on November 8, 2022, to elect the 26 U.S. representatives from the State of New York, one from each of the state's 26 congressional districts. The elections coincided with elections for governor, U.S. Senate, attorney general, comptroller, state senate, and assembly, and various other state and local elections.

Wikimedia Commons has media related to Tom Suozzi .
This page is based on this Wikipedia article
Text is available under the CC BY-SA 4.0 license; additional terms may apply.
Images, videos and audio are available under their respective licenses.