Thomas Sutton (1532–1611) was British civil servant and businessman and founder of Charterhouse School.

Thomas Sutton may also refer to:

Sir Henry Morgan was a Welsh privateer, plantation owner, and, later, Lieutenant Governor of Jamaica. From his base in Port Royal, Jamaica, he raided settlements and shipping on the Spanish Main, becoming wealthy as he did so. With the prize money from the raids he purchased three large sugar plantations on the island. 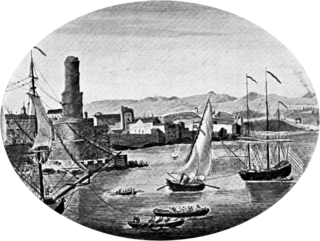 Port Royal is a village located at the end of the Palisadoes at the mouth of Kingston Harbour, in southeastern Jamaica. Founded in 1494 by the Spanish, it was once the largest city in the Caribbean, functioning as the centre of shipping and commerce in the Caribbean Sea by the latter half of the 17th century. It was destroyed by an earthquake on 7 June 1692, which had an accompanying tsunami. Severe hurricanes have regularly damaged it. Another severe earthquake occurred in 1907. 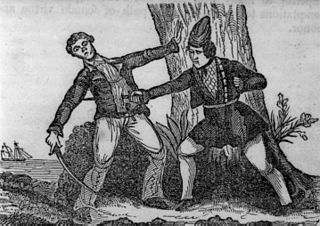 Mary Read, also known as Mark Read, was an English pirate. She and Anne Bonny are two of the most famed female pirates of all time, and among the few women known to have been convicted of piracy during the early 18th century, at the height of the "Golden Age of Piracy".

The parishes of Jamaica are the main units of local government in Jamaica. They were created following the English Invasion of Jamaica in 1655. This administrative structure for the Colony of Jamaica developed slowly. However, since 1 May 1867 Jamaica has been divided into the current fourteen parishes. These were retained after independence in 1962. They are grouped into three historic counties, which no longer have any administrative relevance. Every parish has a coast; none are landlocked.

Thomas Onslow, 2nd Baron Onslow, of West Clandon, Surrey, was a British landowner and Whig politician who sat in the English and British House of Commons between 1702 and 1717. He commissioned the building of Clandon Park House in the 1730s. 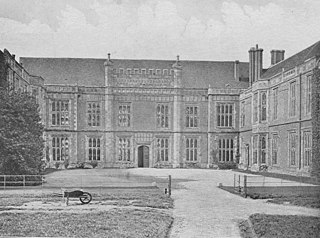 Sutton Place, 3 miles north-east of Guildford in Surrey, is a Grade I listed Tudor manor house built c. 1525 by Sir Richard Weston, courtier of Henry VIII. It is of great importance to art history in showing some of the earliest traces of Italianate renaissance design elements in English architecture. In modern times, the estate has had a series of wealthy owners, a trend started by J. Paul Getty, then the world's richest private citizen, who spent the last 17 years of his life there. Its current owner is the Russian billionaire Alisher Usmanov. A definitive history of the house and manor, first published in 1893, was written by Frederic Harrison, jurist and historian, whose father had acquired the lease in 1874. 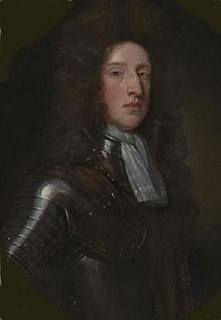 Lord Archibald Hamilton of Riccarton and Pardovan was a Scottish officer of the Royal Navy, and Whig politician who sat in the House of Commons between 1708 and 1747. In the 1690's, he was active in the English Channel pursuing French privateers, including Tyger out of St Malo. He commanded the third-rate HMS Boyne at the Battle of Vigo Bay in October 1702 and then commanded the third-rate HMS Eagle at the Battle of Málaga in August 1704 during the War of the Spanish Succession. He was a controversial Governor of Jamaica. He then joined the Board of Admiralty, ultimately serving as Senior Naval Lord.

Sir Arthur Onslow, 1st Baronet was an English politician who sat in the House of Commons at various times between 1641 and 1685.

John Vaughan may refer to:

James Dawkins was a British antiquarian and Jacobite.

Thomas Burgess or Tom Burgess may refer to:

Sir Thomas Lynch was the English governor of Jamaica on three separate occasions in the 17th century. He was also chief justice of Jamaica for a time.

Thomas Turgis was an English politician who sat in the House of Commons between 1659 and 1704, eventually in 1701 becoming the Father of the House, as the member with the longest unbroken service.

Charles Selwyn of West Sheen, Surrey, was an English politician who sat in the House of Commons between 1722 and 1747.