Thomas Sweeney may refer to:

Thomas Sweeny or Sweeney, was a prominent glass manufacturer in what became Wheeling, West Virginia during the American Civil War, who before that war served in both houses of the Virginia General Assembly and ran the North Wheeling Flint Glass Works.

Thomas Bell Sweeney Jr., a Republican politician from the state of West Virginia. 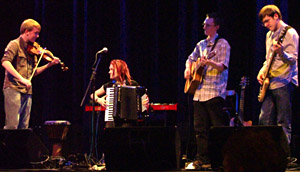 Thomas William Sweeny was an Irish-American soldier who served in the Mexican–American War and then was a general in the Union Army during the American Civil War.

George Thomas may refer to:

The surname Fitzpatrick is the known translation of at least two different surnames: Mac Giolla Phádraig ; and Ó Maol Phádraig. Currently, it is ranked as the 60th most common surname in Ireland with an estimated 12,700 individuals bearing the name. While both Mac Giolla Phádraig and Ó Maol Phádraig have similar meanings, they are likely unrelated; yet both have arrived in the modern era as Fitzpatrick. Despite the prefix "Fitz-", Fitzpatrick is not a name of Hiberno-Norman descent.

Clongowes Wood College is an independent boarding school for boys, located near Clane in County Kildare, Ireland. The school was founded by the Society of Jesus (Jesuits) in 1814, and featured prominently in James Joyce's semi-autobiographical novel A Portrait of the Artist as a Young Man. One of five Jesuit schools in Ireland, it had 450 students in 2019.

The family name Regan, along with its cognates O'Regan, O Regan, Reagan, and O'Reagan, is an Anglicized form of the Irish surname Ó Riagáin or Ó Ríogáin, from Ua Riagáin. The meaning is likely to have originated in ancient Gaelic ri "sovereign, king" and the diminutive suffix -in; thus "the king's child" or "little king". The name was borne by two distinct families: one seated in Meath, the other in Thomond.

Rockwell College, founded in 1864, is an independent day and boarding Catholic secondary school near Cashel, County Tipperary in Ireland.

Finlay is a masculine given name, and also a surname. The given name is represented in Scottish Gaelic as Fionnlagh.

Thomas Hayes may refer to:

Robert, Rob, Bob or Bobby Thomas may refer to:

Thomas Harris is an American author.

Thomas English may refer to:

Thomas Woods is an American historian and author.

Michael Collins may refer to: