Fauntleroy was born in Winchester,Virginia. He was the second son of a career U.S. Army officer,ultimately Colonel Thomas Turner Fauntleroy and his wife,the former Ann Magdalene Magill. He had several brothers and sisters. His son would later trace the family's ancestry to Lt. Col. Charles Mynn Thruston and Lt. Charles Magill of Winchester,who both served in the American Revolutionary War (Magill on General Washington's staff). [1] Thus,the family could trace its descent from the First Families of Virginia. Although Col. Fauntleroy was assigned various commands in the western U.S. territories,his family remained in Frederick county. Thomas Jr. received a private education suitable for his class,including at Benjamin Hallowell High School in Alexandria and the University of Virginia in Charlottesville,where he studied law and graduated in 1844.

In 1847,Fauntleroy began private practice in Winchester and in 1850 was elected Commonwealth's Attorney for Frederick County. In 1860,he owned four slaves (65 and 25 year old Black women and 2 and 5-year-old girls). [3] Frederick county voters twice elected Fauntleroy as one of their delegates in the Virginia General Assembly,so he served (part-time) from 1857 to 1859 and again in 1877. In the prewar election,he and M. R. Kaufman ousted the two previous delegates,and the following term,George W. Ward received the most votes and was seated alongside Kaufman. [4]

As the American Civil War began,the elder Fauntleroy gave up his U.S. Army commission and returned to Virginia,where he lived with this son. He had accepted a commission as general in the Virginia militia,but not a Confederate States Army commission,unlike two of his sons (this Fauntleroy's brothers). His eldest son C. M. Fauntleroy also resigned his U.S. Navy commission,but the ship he commanded,the CSS Rappahannock,was never permitted to leave European waters. His brother Dr. Archibald Magill Fauntleroy served as a Confederate surgeon.

Despite health problems following the Civil War,after agreeing not to again own enslaved people and receiving a presidential pardon on September 29,1865, [5] Fauntleroy resumed his legal practice and political career.

In 1877,he and Nimrod Whitacre ousted the previous men representing Frederick County in the Virginia House of Delegates,but after subsequent redistricting,E. P. Dandridge became the sole representative of Winchester and Frederick County. [6] In 1879 Fauntleroy became the Secretary of the Commonwealth of Virginia,a position appointed by the Governor. [7] In 1882,the Readjuster Party had taken control of the state legislature,and refused to renew the 12-year terms of members of the Supreme Court of Appeals (all but one selected immediately after Virginia voters accepted a new state constitution after the Civil War which prohibited slavery) and elected four members effective January 1,1883. Fauntleroy,Benjamin W. Lacy,Drury A. Hinton and Robert A. Richardson served together on the appellate bench for their twelve-year terms until again the legislature (now controlled by the Democratic Party) refused to renew their terms,so five successors took office in January 1895.(thus the succession box above is arbitrary)

After his judicial service,Fauntleroy moved first to St. Paul,Minnesota,then to St. Louis,Missouri,where his namesake son lived and where Judge Fauntleroy died. His remains were returned for burial at historic Mount Hebron cemetery in Winchester,Virginia. His widow survived him by two decades and died in Washington,D.C.,but is buried beside him.

Alexander White was a distinguished early American lawyer and politician in the present-day U.S. states of Virginia and West Virginia. He served in the House of Burgesses,the Virginia House of Delegates (representing Frederick County and later Berkeley County. During the American Revolutionary War,White facilitated the release of Quaker and Hessian civilian prisoners held by patriots. White also participated in the Virginia Ratifying Convention and became the northwestern Virginia district's inaugural member in the United States House of Representatives. United States President George Washington appointed White one of the commissioners responsible for the planning and construction of Washington,D.C..

Thomas Saunders Gholson was a Virginia lawyer,judge and Confederate politician.

Francis Thomas Anderson,Sr. was a 19th-century American lawyer,politician and slaveowner,who served in the Virginia House of Delegates during the American Civil War and later served on the Supreme Court of Appeals of Virginia.

Edward Calohill Burks was a Virginia lawyer,legislator and jurist,as well as a relative of several other Virginia lawyers or legislators representing Bedford County. He served as a judge on the Supreme Court of Virginia from January 9,1877 through December 31,1882.

James Keith was a Virginia lawyer,soldier,politician and judge,who served as the chief judge of the Supreme Court of Virginia from 1895 to 1916.

Joseph William Chinn was a Virginia lawyer,plantation owner and politician who served in both houses of the Virginia General Assembly and in the United States House of Representatives. 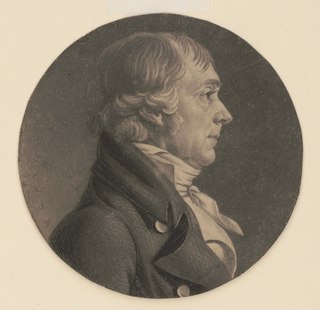 John Smith was a Virginia planter and politician who served in both houses of the Virginia General Assembly as well as the United States House of Representatives.

Fairfax's Devisee v. Hunter's Lessee,11 U.S. 603 (1813),was a United States Supreme Court case arising out of the acquisition of lands originally granted by the British King Charles II in 1649 to Lord Fairfax in the Northern Neck and westward.

Philip Clayton Pendleton was a Virginia attorney,planter,politician and jurist. He briefly served as a United States district judge of the United States District Court for the Western District of Virginia. He previously served in the Virginia House of Delegates and as a Virginia state judge.

Thomas Turner Fauntleroy was a Virginia lawyer,state legislator from Fauquier,Regular Army officer,and briefly a Virginia military officer at the beginning of the American Civil War who refused a commission as brigadier general in the Confederate States Army. 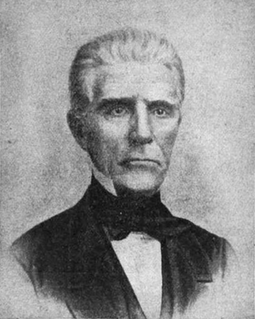 Hugh Holmes was a Virginia lawyer,politician and judge.

Richard Evelyn Byrd Sr. was a Virginia lawyer,politician and newspaperman.

Elisha Boyd was a Virginia lawyer,soldier,slaveowner and politician who served in both houses of the Virginia General Assembly,and developed Berkeley County.

Robert Waterman Hunter was a Virginia newspaper editor and Confederate officer who twice served single terms in the Virginia House of Delegates and became the first Secretary of Virginia Military Records,as well as served as federal Inspector of Public Lands during the first Cleveland administration.