Taylor was born in Glasgow on 27 April 1912. His father, John Sharp Taylor, was an Independent Labour Party Member. He died when Tom was three years old and was raised with his two siblings by his mother from that time.

He was educated at Bellahouston Academy. He left school in 1914 and his first job was as an office boy in the Scottish Co-operative Wholesale Society. He was later their Chairman. [1]

In 1931 a scholarship led to his living in Germany, where he also returned later in his youth. In 1931 he was a member of the German Young Socialists but was opposed the rise of the Nazi Party. During the Second World War he was a conscientious objector. Taylor later became a Quaker.

In 1977 he was elected a Fellow of the Royal Society of Edinburgh. His proposers were Alick Buchanan-Smith, Baron Balerno, Robert Allan Smith, Donald McCallum and Sir David Lowe. [2]

He was married in 1943 to Isobel Wands and had two daughters: Jill and Joyce.

As a young man Taylor was a member of the Independent Labour Party and was elected to Glasgow City Council in 1934 as the city's youngest ever councillor. [3]

He later stood for the ILP as parliamentary candidate in the 1941 Edinburgh Central by-election. He later joined the Labour Party, then the Social Democratic Party, before returning to Labour in the 1990s.

Taylor opposed Scottish devolution. Although an opponent of the Government's Railways Bill in 1993, he noted that he had no objection of privatisation as a concept.

On 29 January 1968 he was created a life peer as Baron Taylor of Gryfe, of Bridge of Weir in the County of Renfrew . [4] From then he had a seat in the House of Lords.

Taylor served as President of the Co-operative Wholesale Society in Scotland and chaired the UK Forestry Commission. From 1971 to 1980, he was chairman of Scottish Railways and a number of other companies including Morgan Grenfell Scotland.

George Foulkes, Baron Foulkes of Cumnock PC is a Scottish politician and life peer who served as Minister of State for Scotland from 2001 to 2002. A member of the Scottish Labour Party and Co-operative Party, he was Member of Parliament (MP) for Carrick, Cumnock and Doon Valley, formerly South Ayrshire, from 1979 to 2005. He was later a Member of the Scottish Parliament (MSP), as one of the additional members for the Lothians region, from 2007 to 2011. 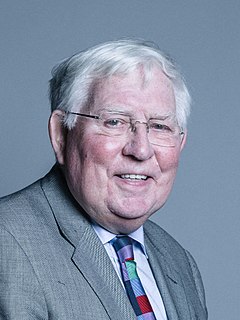 Martin John O'Neill, Baron O'Neill of Clackmannan was a Scottish Labour politician who served as a Member of Parliament (MP) from 1979 until 2005 and as a member of the House of Lords from 2005 until his death.

David Hedley Ennals, Baron Ennals, was a British Labour Party politician and campaigner for human rights. He served as Secretary of State for Social Services from 1976 to 1979.

The River Gryfe is a river and tributary of the Black Cart Water, running through the County of Renfrew in the west of Scotland. It gives its name to the surrounding Gryffe Valley, also known as Strathgryfe.

George Darling, Baron Darling of Hillsborough, PC was a politician in the United Kingdom. He was Labour Co-operative Member of Parliament for Sheffield Hillsborough from 1950 to 1974.

Jesse Dickson Mabon, sometimes known as Dick Mabon, was a Scottish politician, physician and business executive. He was the founder of The Manifesto Group of Labour MPs, an alliance of moderate MPs who fought the perceived leftward drift of the Labour Party in the 1970s. He was a Labour Co-operative MP until October 1981, when he defected to the SDP. He lost his seat in 1983, and rejoined the Labour Party in 1991.

Albert Edward Oram, Baron Oram,, was a Co-operative and Labour politician in the United Kingdom.

John Henry Jacques, Baron Jacques was a British businessman and politician for the Co-operative Party.

Thomas Edward Williams, 1st Baron Williams, was a peer of the United Kingdom.

James Mortimer Peddie, Baron Peddie, MBE was a British businessman and politician, a leading figure in the UK co-operative movement.

Herbert Mellor Gibson was a member of the British co-operative movement and a Labour politician.

Thomas Taylor, Baron Taylor of Blackburn, was a Labour member of the House of Lords. He was one of two peers suspended for six months from admittance to the House of Lords after the 2009 cash for influence scandal, the first peers to be suspended since the 17th century.

George Lennox ("Len") Fyfe, Baron Fyfe of Fairfield was a British politician and life peer who sat as a Labour member of the House of Lords.

James Edward Mortimer was a British trade unionist and the Labour Party General Secretary between 1982 and 1985.