Tommy Tickler (30 September 1852 – 19 January 1938) [1] was an English businessman and Conservative Party politician from Grimsby in Lincolnshire.

Tickler was the son of George Tickler, a miller from Withern in Lincolnshire . [2] [3] He established his own fruit growers and preservers business, serving as Managing Director (MD) of T.G. Tickler Ltd, which operated from Grimsby and Southall, and was also MD of Heathcote Pottery Ltd of Swadlincote [3] in Derbyshire. He was a Justice of the Peace (J.P) in Grimsby, and for fifteen years he was a member of Grimsby Town Council, serving as Mayor in 1907. [3]

Tickler was elected as the Member of Parliament (MP) for Great Grimsby at a by-election in May 1914 [4] following the death of the Conservative MP Sir George Doughty. [5] Doughty had held the seat for almost 20 years, with a short break in 1910.

In 1878 he married his childhood companion, Frances Wells, second daughter of W. T. Wells, of The Hall, Withern. All five of his sons served in the British army and survived the First World War. [6]

From a small grocery business established in 1877, Tickler soon ran one of the largest factories in Grimsby, producing jam and marmalade. ‘Ticklers Fruit Growers & Preservers’ was taken over in the late 1950s.

At the outbreak of World War I, Ticklers secured a contract with the government to supply front lines with plum-and-apple jam —– a contract worth £1m between 1914 and 1918. Its empty jam tins were used as makeshift grenades referred to as ‘Ticklers artillery’. [6]

A song about Tickler's Jam was popular with British troops in the trenches, and is nostalgically sung by Robert Graves in one interview. The song went:

How I love old Tickler's Jam,

Plum and apple in one-pound pots,

Sent from Blighty in ten-ton lots

Every night when I'm asleep,

I'm dreaming that I am,

Forcing my way through the Dardanelles,

With a ton of Tickler's jam.

The damson or damson plum, also archaically called the "damascene", is an edible drupaceous fruit, a subspecies of the plum tree. Varieties of insititia are found across Europe, but the name damson is derived from and most commonly applied to forms that are native to Great Britain. Damsons are relatively small ovoid plum-like fruit with a distinctive, somewhat astringent taste, and are widely used for culinary purposes, particularly in fruit preserves and jams. 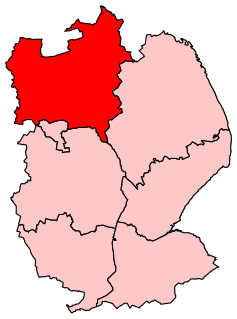 Gainsborough is a constituency in Lincolnshire represented in the House of Commons of the UK Parliament since 1983 by Sir Edward Leigh, a Conservative.

Grantham was a Parliamentary constituency in Lincolnshire, England.

Louth was a county constituency in Lincolnshire which returned one Member of Parliament (MP) to the House of Commons of the Parliament of the United Kingdom from 1885 until it was abolished for the 1983 general election.

The 1921 Louth by-election was a by-election held on 22 September 1921 for the British House of Commons constituency of Louth in Lincolnshire.

Lewis Haslam, was a Liberal Party Member of Parliament (MP) in Wales, representing Monmouth Boroughs from 1906 to 1918 and then Newport from 1918 until his death in 1922.

Sir Robert Pattinson, JP, DL was a British Liberal politician and businessman. Pattinson joined his family's railway contracting firm after finishing school and was quickly appointed to senior positions. In 1900, he became chairman of Ruskington Urban District Council and four years later joined Kesteven County Council, eventually becoming an alderman and serving as its chairman for 20 years between 1934 and his death in 1954. He chaired the Sleaford Liberal Association (1900–18) and was nominated as the party's representative for Sleaford shortly before World War I broke out. He contested Grantham unsuccessfully in 1918, but was returned for the seat in 1922, serving until he was defeated in the following year's general election. Several other unsuccessful attempts at a parliamentary career followed. He chaired several bodies responsible for maintaining Lincolnshire's waterways, served as a magistrate for Kesteven and Lindsey and sat as Lincolnshire's High Sheriff in 1941. Knighted in 1934, Pattinson died aged 82 in 1954 after several years of illness.

James Daniel Kiley was a British businessman and Liberal Party politician who served in the House of Commons from 1916 to 1922 as a Member of Parliament (MP) for constituencies in the Whitechapel area of the East End of London.

Sir Charles Thomas-Stanford, 1st Baronet, born Charles Thomas, was a British Conservative Party politician from Brighton. He sat in the House of Commons from 1914 to 1922. 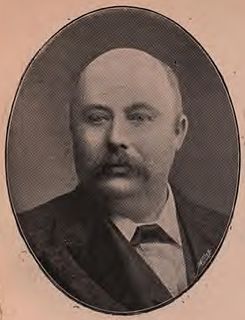 Sir George Doughty was a British ship-owner and politician from Grimsby in Lincolnshire. He sat in the House of Commons for most of the period from 1895 to 1914.

John Fildes was a British businessman and Liberal Party politician.

Sir Edmund Royds, OBE, DL was an English solicitor and Conservative Party politician. He practised law in London, and held a country seat in Lincolnshire, from where he was returned to the House of Commons from 1910 to 1922, and held numerous local offices.

The 1917 Spalding by-election was a parliamentary by-election held for the House of Commons constituency of Spalding in Lincolnshire on 25 October 1917.

The Wycombe by-election was a Parliamentary by-election. It returned one Member of Parliament (MP) to the House of Commons of the United Kingdom, elected by the first past the post voting system.

The Great Grimsby by-election was a Parliamentary by-election. It returned one Member of Parliament (MP) to the House of Commons of the United Kingdom, elected by the first past the post voting system. It was one of the last by-election contests to take place before the outbreak of the Great War, and provided a good indicator of how the main parties would have performed at an anticipated general election for 1914 or 1915.