Last updated June 18, 2020
This is a Chinese name; the family name is Tien/Tian.

Thomas Tien Ken-sin, SVD (Chinese :田耕莘; pinyin :Tián Gēngxīn; October 24, 1890 – July 24, 1967) was a Chinese Cardinal of the Catholic Church and chair of Fu Jen Catholic University. He served as Archbishop of Peking from 1946 until his death, and was elevated to the cardinalate in 1946 by Pope Pius XII.

Main article: Pope Pius XII and the Church in China

For centuries, access to the people of China was difficult for the Catholic Church, because as a Church she did not recognize local Confucian customs of honouring deceased family members. To the Chinese, this was an ancient ritual; to the Holy See, it was a religious exercise which conflicted with Catholic dogma. As a result of this and its foreign origin, the Church encountered much resistance in China. Within month of his election, Pope Pius XII issued a dramatic change in policies. On December 8, 1939, the Sacred Congregation of the Propagation of Faith issued at his request a new instruction by which Chinese customs were considered not superstitious, but an honourable way of showing esteem for one's relatives and therefore permitted by Catholic Christians. [1] Within a short interval, in 1943, the Government of the Republic of China established diplomatic relations with the Holy See. The Papal decree changed the ecclesiastical situation in China in an almost revolutionary way. [2] As the Church began to flourish, Pius elevated China's status within the Church, established a local ecclesiastical hierarchy, and received the Archbishop of Peking, Thomas Tien Ken-sin SVD, into the College of Cardinals. [3]

After the Second World War, an estimated four million Chinese professed the Catholic faith. By 1948, the Catholic Church operated some 254 orphanages and 196 hospitals with 81,628 beds, carrying out a great deal of pastoral work throughout China. [4] While Catholics represented less than one percent of the population, they had increased dramatically. In 1949, there were in mainland China:

The establishment of Mao Zedong's communist regime in 1949 put these early advances on hold and led to the persecution of thousands of clergy and faithful in China. The losses in the following years were considerable. Some of the Catholic hierarchy, including the archbishops of Nanking and Peking, left the mainland and eventually made their way to Taiwan. In 1951, the Papal Nuncio, Archbishop Riberi, was expelled, as were many foreign missionaries, who were accused of acting as agents of imperialist forces. Hundreds more Catholic clergy experienced increased supervision, frequent arrests and torture, and Catholic laypeople were under tremendous pressure to renounce their faith. The Holy See reacted with several encyclicals and apostolic letters, Cupimus Imprimis , Ad Apostolorum principis , and Ad Sinarum gentem (1954). [6]

In 1957, a schismatic Chinese Catholic Patriotic Association, which does not recognize papal authority, was formed by the Chinese Communist Party. Bishops and priests who refused to join the Patriotic Association were imprisoned, forced to engage in degrading and exhaustive manual labor, and many were martyred in captivity.

Thomas Tien Ken-sin was born in Chantsui, Yanggu, (Shantung province) to Kilian Tien Ken-sin and his wife Maria Yang. Baptized in 1901, he studied at the seminary in Yenchowfu before being ordained to the priesthood by Bishop Augustin Henninghaus on June 9, 1918. Tien then did pastoral work in the Yangku Mission until 1939. He entered the Society of the Divine Word on March 8, 1929, in the Netherlands, taking his first vows on February 2, 1931, and his final ones on March 7, 1935. He was raised to Apostolic Prefect of Yangku on February 2, 1934.

On July 11, 1939, Tien was appointed Apostolic Vicar of Yangku and Titular Bishop of Ruspae. He received his episcopal consecration on the following October 29 from Pope Pius XII himself, with Archbishops Celso Constantini and Henri Streicher, MAfr, serving as co-consecrators. Tien was later made Apostolic Vicar of Qingdao on November 10, 1942.

He was elevated to Cardinal Priest of Santa Maria in Via by Pope Pius XII in the consistory of February 18, 1946. Tien, the first cardinal from China, was then named, on April 11 of that same year, the first Archbishop of Beijing in post-Yuan Dynasty China. [7] In 1951 he was exiled from China by the Communist regime, and spent this time in Illinois in the United States, to where he came that year for treatment of a heart ailment. [8] He was one of the cardinal electors who participated in the 1958 papal conclave which selected Pope John XXIII, and was Apostolic Administrator of Taipei from December 16, 1959 to 1966. From 1962 to 1965, he attended the Second Vatican Council, and voted in the 1963 papal conclave, which selected Pope Paul VI.

Tien died in Taipei on July 24, 1967, at age 76. He is buried in the metropolitan cathedral of that same city.

Pope Pius VIII, born Francesco Saverio Maria Felice Castiglioni, was head of the Catholic Church and ruler of the Papal States from 31 March 1829 to his death in 1830.

The Chinese Patriotic Catholic Association, abbreviated CPA, CPCA or CCPA, is an organization established in 1957 by the People's Republic of China's Religious Affairs Bureau to supervise mainland China's Catholics. In his encyclical Ad Apostolorum principis of 29 July 1958, Pope Pius XII deplored the attitude and activities of the Association and declared the bishops who participated in consecrating new bishops selected by the Association to be excommunicated. Pope Benedict XVI referred to the agents of the Association as people who, though not ordained priests and sometimes not baptized, "control and take decisions concerning important ecclesial questions, including the appointment of bishops." The organization is overseen by the United Front Work Department of the Communist Party of China following the State Administration for Religious Affairs' absorption into the United Front Work Department in 2018. 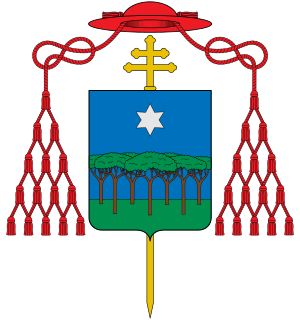 Luigi Maglione was an Italian Cardinal of the Roman Catholic Church. He was elevated to the cardinalate in 1935 and served as the Vatican Secretary of State under Pope Pius XII from 1939 until his death. Pius XII never replaced Maglione, opting to assume the responsibilities of the office himself, with the assistance of two undersecretaries.

Adeodato Giovanni Piazza, O.C.D. was an Italian friar of the Discalced Carmelite Order, who became a cardinal of the Roman Catholic Church, and Patriarch of Venice, as well as a member of the Roman Curia in Vatican City. 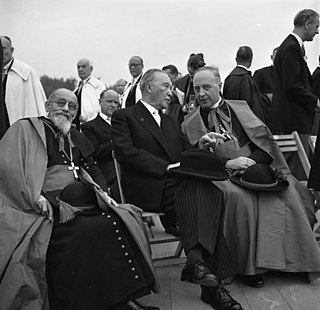 Joseph Wendel was a German Cardinal of the Roman Catholic Church who served as Archbishop of Munich and Freising from 1952 until his death, and was elevated to the cardinalate in 1953 by Pope Pius XII.

Valerio Valeri was an Italian Cardinal of the Catholic Church. He served as Prefect of the Sacred Congregation for Religious in the Roman Curia from 1953 until his death, and was elevated to the cardinalate in 1953 by Pope Pius XII. 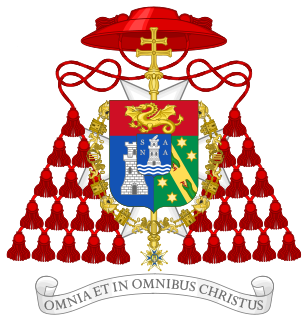 Federico Tedeschini was an Italian Cardinal of the Holy Roman Church who served as Papal Datary in the Roman Curia from 1938 until his death, and was elevated to the cardinalate in 1933 in pectore by Pope Pius XI.

José María Caro Rodríguez was a Chilean Cardinal of the Roman Catholic Church. He served as Archbishop of Santiago from 1939 until his death, and was elevated to the cardinalate in 1946 by Pope Pius XII.

Gaetano Cicognani was an Italian Cardinal of the Catholic Church. He served as Prefect of the Apostolic Signatura from 1954 until his death, and was elevated to the cardinalate in 1953 by Pope Pius XII. To date, he and his brother, Amleto Giovanni Cicognani, are the last pair of brothers to serve simultaneously in the College of Cardinals.

The Roman Catholic Archdiocese of Taipei is a diocese of the Roman Catholic Church in Taiwan. Pope Pius XII erected it as the Apostolic Prefecture of Taipei on 30 December 1949. On 7 August 1952, it was elevated to an archdiocese, with the suffragan sees of Chiayi, Hsinchu, Hualien, Kaohsiung, Taichung, and Tainan.

Carlo Cremonesi was an Italian Cardinal of the Roman Catholic Church who served as Territorial Prelate of Pompei from 1926 to 1928, and was elevated to the cardinalate in 1935.

The Church policies after World War II of Pope Pius XII focused on material aid to war-torn Europe, the internationalization of the Roman Catholic Church, its persecution in Eastern Europe, China and Vietnam, and relations with the United States and the emerging European Union.

Pope Pius XII and the Church in China involves relations of the Holy See with China from 1939-1958. The Vatican recognized Chinese rites in 1939, elevated the first Chinese cardinal in 1946, and established a Chinese hierarchy.

Orientales omnes Ecclesias is an encyclical of Pope Pius XII to the faithful of the Ukrainian Greek Catholic Church. It commemorates the three hundred and fiftieth anniversary of the Union of Brest.

Persecutions against the Catholic Church took place throughout the pontificate of Pope Pius XII (1939-1958). Pius' reign coincided with the Second World War, the commencement of the Cold War and the accelerating European decolonisation. During this time, the Catholic Church faced persecution under Fascist and Communist governments.