He was elected as Member of Parliament (MP) for Mayo at the 1874 general election but was shortly after unseated. At the resulting by-election, he failed to regain the seat. [2] 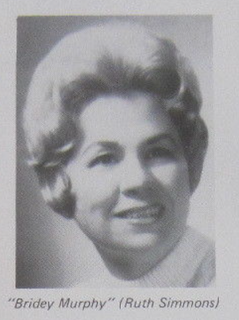 Bridey Murphy is a purported 19th-century Irishwoman whom U.S. housewife Virginia Tighe claimed to be in a past life. The case was investigated by researchers and concluded to be the result of cryptomnesia.

Mary Tighe was an Anglo-Irish poet. 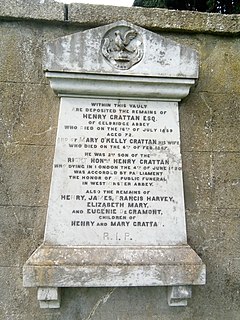 Henry Grattan was an Irish politician, who was Member of Parliament for Dublin City on behalf of the Whigs from 1826 to 1830 in the British House of Commons. From 1831 to 1852, he represented Meath for the Repeal Association.

Mayo was a parliamentary constituency in Ireland, which returned two Members of Parliament (MPs) to the House of Commons of the Parliament of the United Kingdom from 1801 to 1885.

Dungannon was a United Kingdom Parliament constituency, in Ireland, returning one MP. It was an original constituency represented in Parliament when the Union of Great Britain and Ireland took effect on 1 January 1801.

Londonderry City was a parliamentary constituency in Ireland. It returned one Member of Parliament (MP) to the House of Commons of the Parliament of the United Kingdom, elected by the first past the post voting system.

The Russellite group were the followers of Thomas Wallace Russell, an Irish political leader of the early twentieth century.

North Tyrone was a constituency of the Parliament of Northern Ireland.

Richard Hazleton was an Irish nationalist politician of the Irish Parliamentary Party. He was Member of Parliament (MP) for North Galway from 1906 to 1918, taking his seat in the House of Commons of the United Kingdom of Great Britain and Ireland.

This is a list of members of the New South Wales Legislative Assembly from 1860 to 1864:</ref>

Richard Tighe of Woodstock, County Kilkenny, and Rossana, County Wicklow, was a justice of the peace, Mayor of Dublin in 1651, High Sheriff of County Dublin in 1655, and of County Kildare in 1662, and represented Dublin city in the Second Protectorate Parliament in 1656.

The West Down by-election to the Parliament of Northern Ireland was held on 5 July 1921. The by-election was held due to the appointment as Recorder of Belfast of the incumbent UUP MP, Daniel Martin Wilson. The UUP candidate Thomas Browne Wallace was elected unopposed.

John Thomas Donovan was an Irish barrister and nationalist politician who sat in the House of Commons from 1914 to 1918.

Robert Stearne Tighe (1760–1835) was an Irish writer and Fellow of the Royal Society.

Réada Cronin is an Irish Sinn Féin politician who has been a Teachta Dála (TD) for the Kildare North constituency since the 2020 general election.