Thomas Tingey Craven (8 July 1873 in Vallejo, California – 5 April 1950 in St. Albans, New York) was a United States naval officer with service in World War I and World War II and rose to the rank of vice admiral.

He was a son of Henry Smith Craven, a United States Navy officer and engineer and the grandson of his namesake, Thomas Tingey Craven (1808–1887) and great-grandson of Commodore Thomas Tingey (1750–1829).

Craven graduated from the United States Naval Academy in 1896. His first assignment after graduation was to the newly commissioned battleship USS Massachusetts (BB-2), where he served as a naval cadet. (Prior to the first world war, graduates of the naval academy were required to serve two years at sea prior to being commissioned.) Craven was commissioned as an ensign on 6 May 1898. During the Spanish–American War he served on the collier USS Scindia which delivered coal to recently captured Guantanamo Bay in Cuba in June 1898. He married Antoinette Merritt in 1901.

In 1908, Craven was stationed aboard the battleship USS South Carolina (BB-26) assigned duties as the ship's gunnery officer. In 1916, Thomas T. Craven was given command of the gunboat Sacramento (PG-19) which he commanded throughout World War I until 1918.

In 1919 while serving as the director of Naval Aviation, Tingey ordered the USS Jupiter (AC-3), a collier, to be converted into the U.S. Navy's first dedicated aircraft carrier which was renamed, USS Langley (CV-1). In the aftermath of the Honda Point Disaster in September 1923, Admiral Tingey defended Captain Edward H. Watson, Commanding Officer of Destroyer Squadron 11, during the courts martial proceedings. [1]

During the remainder of his naval career, Craven commanded Destroyer Squadron 15, was the Director of Naval Communications, commanded Great Lakes Naval Training Station, the Yangtze Patrol in China, Battleship Division One and served as the Commandant of the Thirteenth Naval District in Bremerton, Washington prior to retiring from active duty in 1937.

Following the United States' entrance into World War II, Vice Admiral Craven was recalled to active duty serving as superintendent of the New York Maritime Academy at Fort Schuyler, NY until 1946, when he was succeeded by Vice admiral Herbert F. Leary. 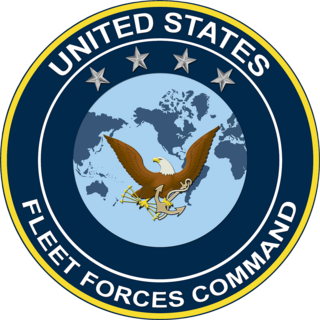 The United States Fleet Forces Command (USFF) is a service component command of the United States Navy that provides naval forces to a wide variety of U.S. forces. The naval resources may be allocated to Combatant Commanders such as United States Northern Command (USNORTHCOM) under the authority of the Secretary of Defense. Originally formed as United States Atlantic Fleet (USLANTFLT) in 1906, it has been an integral part of the defense of the United States of America since the early 20th century. In 2002, the Fleet comprised over 118,000 Navy and Marine Corps personnel serving on 186 ships and in 1,300 aircraft, with an area of responsibility ranging over most of the Atlantic Ocean from the North Pole to the South Pole, the Caribbean Sea, Gulf of Mexico, and the waters of the Pacific Ocean along the coasts of Central and South America. The command is based at Naval Support Activity Hampton Roads in Norfolk, Virginia and is the navy's service component to U.S. Northern Command and is the Joint Functional Maritime Component Command under the U.S. Strategic Command. 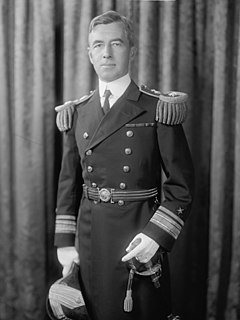 Thomas Charles Hart was an admiral in the United States Navy, whose service extended from the Spanish–American War through World War II. Following his retirement from the navy, he served briefly as a United States Senator from Connecticut. 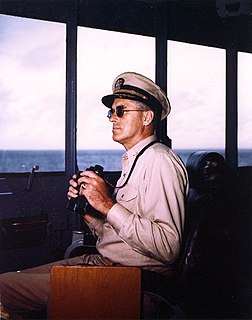 William McCombe Callaghan was a United States Navy officer who served as the first captain of the battleship USS Missouri and the inaugural commander of the Military Sea Transportation Service. Through the course of almost 40 years, he served his country in three wars. His naval career began on a destroyer in the final months of World War I. Following command of the destroyer USS Reuben James and logistical work prior to World War II, he took command of Missouri in 1944.

Vice Admiral Joel Roberts Poinsett Pringle was a distinguished officer of the United States Navy, serving from 1894 to 1932. 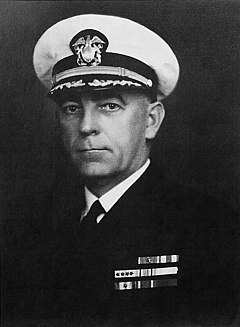 Robert Pearce Briscoe was an Admiral of the United States Navy. He commanded two ships, a destroyer squadron, and an amphibious group during World War II. He later served as Commander-in-Chief, Allied Forces Southern Europe, from 1956 to 1959. He was a native of Centreville, Mississippi born February 19, 1897, to Pearce and Alice Briscoe.

Charles Turner Joy was an admiral of the United States Navy during World War II and the Korean War. During the last years of his career, he served as Superintendent of the Naval Academy. The destroyer USS Turner Joy (DD-951) was named for him. 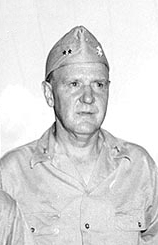 Theodore Stark "Ping" Wilkinson was a Vice-Admiral of the United States Navy during World War II. He also received the Medal of Honor for his actions in Veracruz, Mexico. 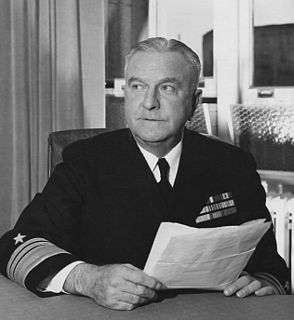 Robert Carlisle Giffen was an admiral in the United States Navy.

Harry Wilbur Hill was an admiral in the United States Navy during World War II. 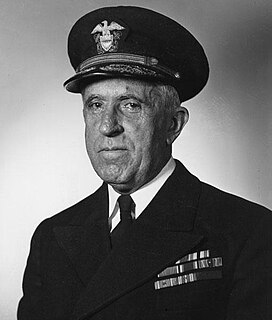 Herbert Fairfax Leary was a highly decorated officer in the United States Navy with the rank of Vice admiral. A son of Rear admiral Richard P. Leary, he distinguished himself during World War I while on the staff of Commander, U.S. Naval Forces in Europe under Admiral William Sims and received Navy Cross, the United States Navy second-highest decoration awarded for valor in combat.

Vice Admiral Ferdinand Louis Reichmuth was an officer of the United States Navy who served in World War I and World War II.

Earl Everett Stone was a rear admiral in the United States Navy. He is most noted for being the first director of the Armed Forces Security Agency, the predecessor to the National Security Agency. 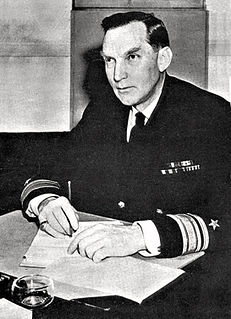 Donald Bradford Beary was a vice admiral of the United States Navy. His career included service in both World War I and World War II and a tour as President of the Naval War College. He commanded a wide variety of ships and organizations, and is particularly noted for his leadership during World War II in establishing and directing a large-scale U.S. Navy training program and for his pioneering and highly successful work as a commander of U.S. Navy underway replenishment forces. 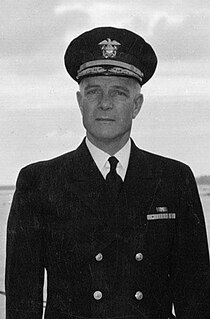 Vice Admiral Olaf Mandt Hustvedt was a senior officer of the United States Navy. He saw service in World War I and World War II, operating in both the Battle of the Atlantic and the Pacific War. During his 36-year career, he distinguished himself as an expert in naval ordnance and as a battleship commander.

Vice Admiral Walter Newhall Vernou was a career officer in the United States Navy who served during the Spanish–American War, World War I and World War II. 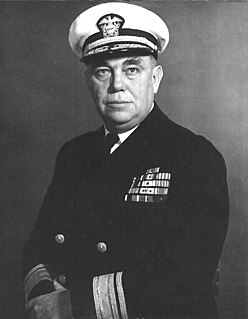 Thomas Ross Cooley was a decorated officer in the United States Navy with the rank of Vice Admiral. A veteran of two world wars, he distinguished himself as commanding officer of battleship USS Washington during Mariana Islands campaign and later as Commander, Battleship Division Six during the battles of Iwo Jima and Okinawa.